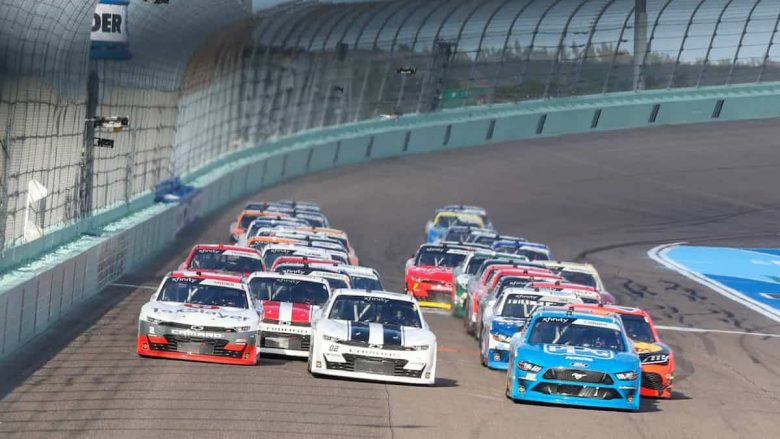 For the second straight week, the NASCAR Xfinity Series will race on a 1.5-mile intermediate speedway, but this week at Charlotte Motor Speedway, drivers will have to negotiate 50 more miles than they did last week at Texas.

Saturday’s Alsco Uniforms 300 will be contested over 200 laps (300 miles), with stage breaks scheduled after 45 and 90 laps. Ty Gibbs is the current winner.

JR Motorsports has a remarkable record. The drivers of the NASCAR Hall of Famer Dale Earnhardt Jr.’s team have won eight consecutive race stages, two each at the four previous events. This is a new record in NASCAR Xfinity Series stage victories.

Three full-time JRM drivers, Josh Berry, Justin Allgaier, and Noah Gragson have all won races this season. Sam Mayer was the exception, and he made a huge step towards his maiden Xfinity win on Friday.

Mayer won the pole position during time trials, turning a lap in 30.018 seconds (179. 892 mph), more than two-tenths of a second faster than teammate Allgaier.

Nevertheless, oddsmakers favor both Allgaier (+400 DraftKings) and Gragson (+450) over their 18-year-old stablemate. We disagree.

We think it’s Mayer’s week to win, and we like the price at +800 via DraftKings. In the last 15 Xfinity races at Charlotte, 11 winners have come from the top three starting spots, four from the pole.

Ryan Preece has made the most of part-time opportunities

He won the Iowa Speedway race and was in the top five for the three other races. Preece was a star after that performance.

This weekend Preece will be racing in Charlotte’s Camping World Truck Series as well as the Xfinity Series and Cup Series. Preece is expected to be a contender for Xfinity in the No. 5 BJ McLeod Motors Ford in partnership with Stewart-Haas Racing.

Sure enough, Preece qualified third on Friday afternoon, but oddsmakers have him at +1200 (DraftKings). This is a good bet but we prefer him to finish in top three. That bet will pay +300.

Overlooked Austin Dillon may be the best betting opportunity at Charlotte

Are you kidding? Austin Dillon will be racing in the NASCAR Xfinity Series’ first race. He is driving the same car Tyler Reddick won last Saturday at Texas. He’s also a distant possibility this week.

Dillon’s No. 48 Big Machine Racing Chevrolet operates under an alliance with Richard Childress Racing, owned by Dillon’s grandfather. You can be sure that Dillon will receive the very best in Charlotte.

Also, seven of Dillon’s nine career Xfinity Series victories were in part-time seasons. This was just one year after he reached the Cup Series. It was at Charlotte Motor Speedway that Dillon scored his first Cup victory in the 2017 Coca-Cola 600.

We’re all over Dillon to win at +1500 (DraftKings) and +400 to finish top-three. You can place your wagers, and we’ll say thank you HTML1. One quick note: The defending race winner Ty Gibbs crashed into the wall on Friday and didn’t make it to qualifying. Though he’s still the oddsmaker’s third choice at +500 (DraftKings), we question his ability win form the rear of the field in a repaired car.

How to Watch Alsco Uniforms 300