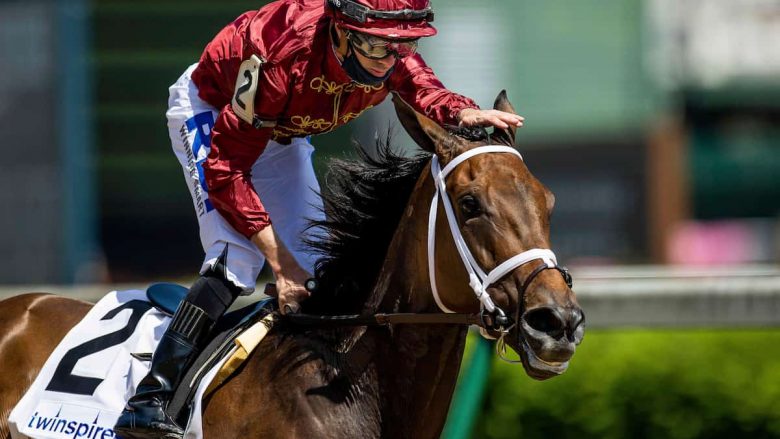 It will be a clash of female titans when Shedaresthedevil and Ce Ce headline a field of eight older mares entered for Saturday’s Grade 2 Azeri Stakes at Oaklawn Park.

Ce Ce is the champion of the two, but Shedaresthedevil is more accomplished around two turns and might hold a slight edge in the 1 1/16-mile Azeri.

This is the same race where the Brad Cox-trained daughter of Daredevil defeated the champion Letruska in a stirring edition last year.

The Kentucky Oaks winner of 2020 has won 9-of-17 overall, but will be making her first start since a losing effort in last fall’s Breeders’ Cup Distaff.

While Shedaresthedevil saw her championship hopes of last year come to an end at the Breeders’ Cup, it was Ce Ce’s day to shine as she ran right by the heavily favored Gamine in the Breeders’ Cup Filly & Mare Sprint.

The victory vaulted her to an Eclipse Award as the nation’s top female sprinter. Coming off a second in the Grade 2 Santa Monica last month, she has the advantage of a race this year. She also has good experience at the trip, having captured the Grade 1 Apple Blossom at Oaklawn back in 2020.

If you are looking for an alternative to the top two, Pauline’s Pearl is one to consider. A 4-year-old daughter of Tapit, she comes into the Azeri on a two-race winning streak, most recently winning the Grade 3 Houston Ladies Classic in impressive style. Among her three career stakes wins is last year’s Grade 3 Fantasy at Oaklawn Park.

This daughter of Daredevil has been one of the best female dirt runners in the nation the last couple of years.

Very consistent, she turns in a strong effort every time from on or near the early lead. Even her mid-pack finish in the Breeders’ Cup last fall was a solid effort considering the suicidal early fractions of that race.

Returning off a four-month layoff raises a question, but she did the same thing here last year and defeated Letruska in the same race.

This time around she will need to deal with plenty of early speed and a few very good mares who can rally. She is obviously a big threat to win again, but I think the pace scenario better suits her top rival.

With the right race set up, this daughter of Elusive Quality has proven to be a true Grade 1 performer.

She got that fast pace in the Breeders’ Cup Filly & Mare Sprint and she made the most of it, rallying to an impressive win, which earned her an Eclipse Award. I do like her better at 7 furlongs than the 8 ½ that she will see on Saturday, but if the pace is contested, she will have no problem rallying at two turns.

She certainly proved that two seasons ago when she came to Oaklawn and defeated a strong field in the Grade 1 Apple Blossom at the same distance.

With a seasonal prep under her belt, she should be ready to fire another top effort. Shedaresthedevil is a tough foe, but with all the speed, I believe the race sets up a bit better for Ce Ce. She is the top pick.

A regally bred daughter of Tapit, this Steve Asmussen-trained filly will get her second shot against some of the top females in the land.

Last spring she was competitive early, but faded out of contention in the Grade 1 Kentucky Oaks. In seven other stakes tries, though, she sports an excellent 7-3-3-1 mark, including two in a row.

She also is proven over the Oaklawn Park track, having won the Grade 3 Fantasy here last April. She looks to be a cut below the top two, but may be turning a corner, as her latest was her best race yet. She can pass horses, as well, which makes her dangerous in the stretch. I don’t like the weight assignment, but she is clearly the top threat to the favorites.

Trained by Norm Casse, this daughter of Super Saver has turned things around of late with three straight sharp wins after beginning her career 0-for-5.

Coming off a 5 ½-length win in a Churchill Downs allowance race to close out her 3-year-old season four months ago, she now will graduate to stakes company to begin the 2022 season. She certainly has earned a shot in stakes company, but I do worry that her two most impressive victories both came on off tracks.

She also adds to what should be a contested early pace. With those two questions, I cannot back her in this difficult spot, but she looks like one to watch out for this year.

This one was good enough to beat Pauline’s Pearl in the Grade 3 Remington Park Oaks last fall, but could not handle her the next time they raced.

A 4-year-old daughter of Bernardini, she brings plenty of early speed to the table and has been freshened since last November, which makes me think she will really be geared up to go out early.

With only seven career races, perhaps she can become even better at 4, but this is a tough spot for her seasonal debut. She’s a pretty nice filly, but with plenty of other speed in here, she will not be on my tickets on Saturday.

This lightly raced daughter of Laoban is a bit of a wildcard in the Azeri. With only six lifetime races and some solid stakes results, she is eligible to turn in an improved effort on Saturday. She will definitely need it, as her return race leaves plenty to be desired.

The allowance sprint, in which she faded to fourth, should have her more prepared this time, but still it is a huge jump to believe she can defeat the likes of Shedaresthedevil and Ce Ce. Those that will use her as a longshot can point to her runner-up finish to Pauline’s Pearl in the Fantasy, but I like others better.

This Oklahoma-bred mare has done most of her running in her home state, where she is a multiple stakes winner.

This test will easily be the toughest one she has ever faced, though. In the past when she has visited Oaklawn Park, she has found no success.

But on the bright side she did turn in a very good effort last time, when she rallied for second in the Grade 3 Bayakoa.

With a good early pace likely here, the most recent result gives hope that she can again rally up for a share. Still, this one is significantly tougher, so anything better than a minor share would be a surprise.

One of two longshots in the field from trainer Shawn Davis, this 6-year-old daughter of Curlin has spent much of her career running against lesser horses, but has had some stakes success recently.

Her second-place finish last time behind Pauline’s Pearl was probably her best race yet, but still a way from truly contending here. Given that she is more speed in a race with plenty of early pace, it’s hard for me to see a scenario where she is in contention at the end.

The other Davis longshot has done most of her running on the grass, but does have a romping win on the main track three starts back.

That came against much, much cheaper, though. With the least class of any mare in the field and coming off an eighth-place finish in a listed stakes race on the turf last time, I can’t find any reason to back her against this tough field.

How to watch the Azeri Stakes