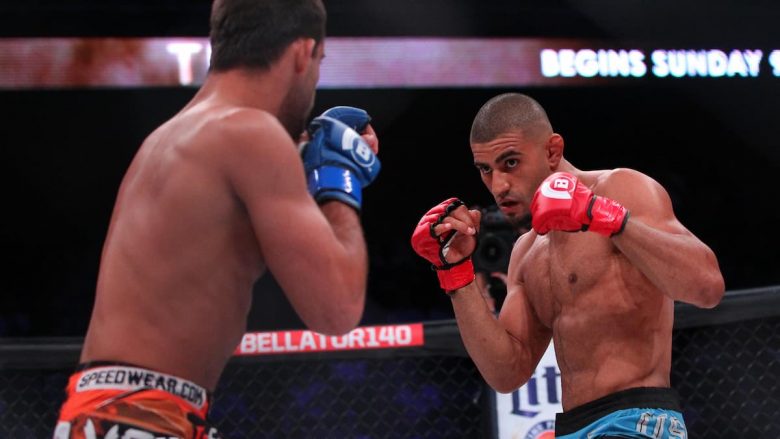 The odds for this bout are provided by BET365. Click on the odds below to head to DraftKings and place a bet.

Former Bellator welterweight champion Douglas Lima currently finds himself on the worst losing streak of his long and illustrious career.

His second round KO of Michael Venom Page in the Bellator MMA welterweight tournament semi-finals sent shockwaves through the mixed martial arts world and went viral all over social media.

Lima’s last win in fact was in the tournament final where he defeated Rory “Red King” McDonald by unanimous decision to take home the welterweight title and a million dollar check.

His next fight, which would turn out to be the first of three losses in a row, was a step up in weight where he faced Gegard Mousasi for the middleweight belt.

Ultimately Mousasi was able to outscore Lima over five rounds to win by unanimous decision.

Lima’s next loss would cost him his welterweight title as he lost by unanimous decision to undefeated Ukrainian fighter, Yaroslav Amosov.

The Phenom’s most recent fight was a rematch vs Michael Venom Page and this time around it would be MVP who walked away with the win, although it would be by a close split decision.

Jason Jackson has put together an impressive five fight winning streak in the promotion, with all wins coming by way of unanimous decision.

Lima was originally set to face Patricky Pitbull in the main event but when Pitbull pulled out with an injury, Jackson stepped up in his place.

Jackson will undoubtedly attempt to out score Lima as the rounds go by to add yet another win over a legend to his resume, however considering the veteran experience level of Lima and the fact that his recent losses all came against high level competition, the former welterweight champion may be set for his first win since 2019.

All the way back in 2017, Sidney Outlaw would earn himself a unanimous decision win over Micheal Cora on Dana White’s contender series, but apparently did not put on a performance worthy of a UFC contract, and would find himself fighting across various promotions on the regional scene.

Sidney Outlaw made his Bellator debut back in 2019 where he defeated Robert Huerta by unanimous decision.

Outlaw’s first Bellator loss would come at the hands of current UFC lightweight contender Micheal Chandler who knocked him out in the first round with a right cross.

Outlaw would go on to put together two back to back wins in Bellator over Adam Piccolotti by split decision before going on to defeat former UFC fighter Miles Jury by third round rear naked choke submission.

Musayev’s Rizin winning streak came to an end in his final fight with the promotion where he lost to an outstanding submission specialist in Roberto de Souza, via a triangle choke in the opening round.

Usman Nurmagomedov is most probably the best fighter in Bellator at the moment and the promotion is yet to match him up with an opponent who can give him any real problems.

In fact, the Dagestani contender may be a fight or two away from a Bellator lightweight title shot.

Usman is on such an elite level that this fight should just be business as usual, and he will undoubtedly be looking for a first round finish as always.

Chris Gonzalez made his Bellator debut back in 2019 and has so far put together a record of six wins and just one defeat in the promotion.

Despite CG’s impressive resume, there is no doubt that Usman Nurmagomedov will be his highest level opponent to date, and based on the history of both fighters, it looks like Gonzalez is in for a disappointing night.

It’s a well known fact in mixed martial arts that you should never bet against any fighter with the surname Nurmagomedov!

Usman Nurmagomedov by KO/TKO/DQ in round one (-190)

Lorenzo Larkin is a mixed martial arts veteran who has fought in all major United States promotions including Strikeforce, UFC.

After defeating Neil Magny by first round KO in his final UFC fight, Larkin would go on to test free agency and ended up getting signed by Bellator.

He lost his Bellator debut to Douglas “The Phenom” Lima by unanimous decision, before losing the following fight to Paul Daley via second round TKO.

Since the initial two losses with BEllator, Larkin has since put together a six fight winning streak with the promotion and looks to extend that streak with a win over Mukhamed Berkhamov in this bout.

Mukhamed Berkhamov is currently on a seven fight winning streak and made his Bellator debut last year vs Jaleel Willis, where he won the fight by first round guillotine choke submission.

“Cherkes” has shown dominance in the grappling department in most of his fights , with excellent striking to go with it, however this will be his toughest test to date in terms of his opponents veteran experience.

Considering Lorenz Larkins age, he might find himself at a speed disadvantage which will allow Berkhamov to pepper him with shots and score points as the fight progresses.

Davion Franklin has not been in the sport for a long time and made his pro MMA debut with Bellator in 2020 at Bellator 239 where he defeated JW Kiser by ground and pound in the opening round.

Franklin has since extended his record to five wins with no losses and the majority of his wins have come by way of first round knockout.

Marcelo Golm had a stint in the UFC back in the day which went horribly for him with just one win to three losses.

Golm has been rocked by many of his opponents in the past and considering his opponents punching power he may very well be in trouble in this fight.

Golm is a very exciting fighter to watch as he always goes for the early finish and almost all of his wins came in the first round.

While most of Golm’s wins are first round knockouts, he might want to look for a more grappling based approach as he will undoubtedly be at a punching power deficit in his bout.