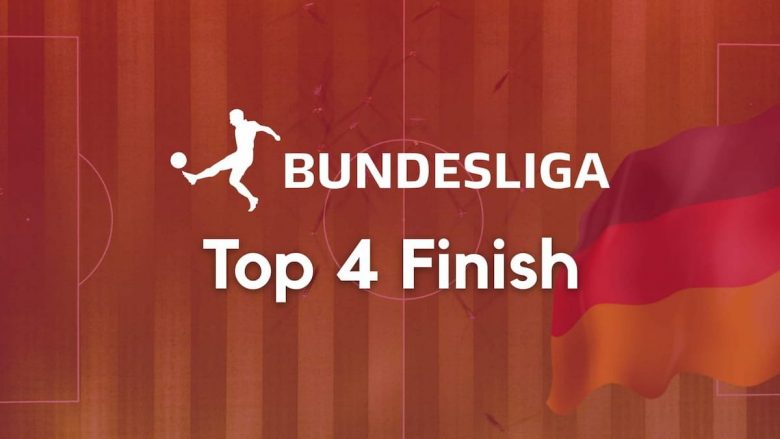 Bundesliga 2021/22 Top Four Odds RB Leipzig -100000
BET NOW SC Freiburg +2500
BET NOW You do not have to be a Bundesliga expert to know that Bayern Munich will almost certainly qualify for the Champions League. The overwhelming probability that Bayern Munich will make it to the Champions League is why Bet MGM and other betting sites do not offer any odds.

Borussia Borussia Dortmund are considered the overwhelming favorite to be in the top 4, despite their difficult campaign. Only a strong finish to the season saw BVB qualify for the Champions League in 2020/21, but they are not expected to endure similar struggles this time round.

RB Leipzig may be a bit more vulnerable after Julian Nagelsmann moved to Bayern Munich. However, Jesse Marsch is an experienced Red Bull manager. The fight for fourth place will likely be between Borussia Monchengladbach and Wolfsburg. Last season, the Wolves won this race and they could win it again.

What happens to the top four Bundesliga teams?

The top four Bundesliga teams automatically qualify for the Champions League group stage. This prize is worth fighting for and of course, the most realistic for many clubs considering Bayern Munich’s current monopolization over the Bundesliga title.

In previous seasons, only the top three teams reached the Champions League group stage, while the fourth place finisher went on to the qualifying phase. That changed at the start of the 2017/18 campaign when UEFA handed more automatic qualification spots to Europe’s biggest leagues, including Germany’s top flight.

Who is on the Top of Bundesliga?

At the time of writing, no matches have taken place in the 2021/22 campaign, so the table is ordered alphabetically. Not even the most passionate Arminia Bielefeld fan will expect their team to still be occupying top spot come 14 May 2020. Bayern Munich is the champion in the Bundesliga. They have won 31 titles since the division was created in 1963, which is 22 more than second-placed Nurnberg. Bayern have finished in first place in each of the last nine seasons, and are widely expected to make it 10 championships in a row in 2021/22.

Bayern are the richest team in the Bundesliga. This would be a benefit in every league but more so in German soccer because of the limitations on investment and external takeovers. The 50+1 rule requires the members of every German club to own 50 percent of shares, plus one share. According to current rules, Roman Abramovich (the Russian billionaire who bought Chelsea) cannot buy a Bundesliga club. HTML4_ Which Bundesliga Clubs have the Most Finishes?

Club Number of Finishes Bayern Munich 28 Borussia Dortmund 20 Bayer Leverkusen 14 Schalke 10 Stuttgart 7 Werder Bremen 7 Borussia Monchengladbach 5 RB Leipzig 4 Hamburg 4 Hertha Berlin 4 Bayern Munich have only missed out on the top four in two of the last 30 Bundesliga seasons. The kings of German soccer finished in a lowly 10th position in 1991/92, and then ended the 1994/95 campaign in sixth spot when Borussia Dortmund won the title.

Dortmund are second with 20 top-four finishes, with Bayer Leverkusen and Schalke the only other sides to have reached double figures.

Who are the top four Bundesliga sides?

Whereas the Premier League had a ‘big four’ in the 2000s – Manchester United, Chelsea, Arsenal and Liverpool – the term is not really used in the Premier League. The term ‘big two’ is often used to refer to Bayern Munich or Borussia Dortmund. It has become almost a “big two” consisting only of Bayern.

Was the Bundesliga Top Four always a goal for clubs?

Bundesliga clubs are now actively aiming for a top four finish. The 2011/12 was not the first time the division’s leading quartet all qualified for the Champions League, but that was the season in which it became established as such.

In the Champions League’s debut campaign of 1992/93, only the Bundesliga title winners were eligible to take part. A second qualification place was added in time for the 1996/97 campaign, and by 1998/99 there were four spots up for grabs to Bundesliga teams.

How can I watch Bundesliga on TV?