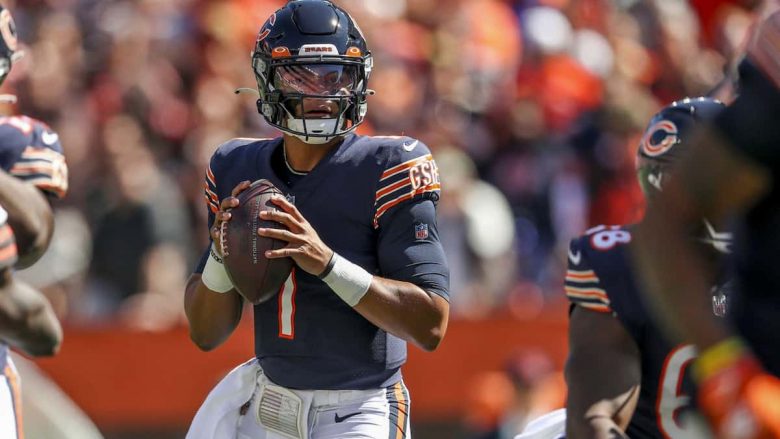 The Chicago Bears will be led by their 5th head coach in ten seasons, a leadership carousel that has led to just two playoff appearances in that stretch (both under HC Matt Nagy), and now that job goes to defensive guru Matt Eberflus, the former Indy Colts DC for the last four seasons.

Eberflus’s main job will be to oversee the development of the franchise’s young QB Justin Fields, who had a tough 2-8 record in his rookie season last year while completing just 58.9 percent of his passes, the team’s defense (ranked 6th last season) already a top-notch unit.

The 2022 season should be an exciting one for this historic football franchise with plenty of chances to place some winnable wagers along the way, so let’s take a look at a few of the best sportsbook promo codes for the Chicago Bears and our top picks for the 2022 season.

FanDuel offers a complete sports betting experience. The range of betting available is massive and the software is easy to use. Get up to $1,000 in free bets!

The NFL is proud of the parity it achieves between its best and worst teams, so even the re-developing franchises like the youthful Chicago Bears have an excellent chance to win at least half of their games, the ‘any given Sunday’ factor a reality, especially while playing at home.

The oddsmakers have the bears winning 6.5 games – last season they would have earned the under with their 6 wins – so the bet here is whether you think that this new head coach and young QB with their upgraded front line and sixth-ranked defense can win at least seven games.

Given that a dysfunctional Chicago bunch posted six wins last season makes this over bet seem like a winner since they are a better group now having added young talent to their secondary (SS Jaquan Brisker, CB Kyler Gordon) with fresh legs to help keep their defense off the field.

BetMGM launched its sportsbook in Illinois in 2021 and is currently offering new customers a free bet up to $1000. What are you waiting for? Sign-up here!

Chicago Bears to Miss the Playoffs (-650)

When a team is so young and in transition, the playoffs are a nearly impossible goal to achieve, although a wildcard spot is a valid path to the postseason that means the Bears would have to be one of the best seven teams in the NFC, which respectfully does not seem likely this season.

That’s bad news for the franchise and for Bears fans, but for sports gamblers, it could be the best news out there if they put some money on this futures bet that says if you bet $650 they watch the postseason from their couches and they do, you would win $100 plus your bet.

Tough bet for the true Bears fans because the more the team wins, the less likely you will be with this futures bet, so it might be a better idea for you to shop around the other thirty-one teams to see which ones you are certain won’t make the playoffs and make this bet with one of them.

Known for great customer service and their wide availability across the United States, DraftKings Sportsbook is a great sportsbook where you will find a huge amount of NFL bets. Sign-up for a chance to get $1,000 deposit bonus.

For those new to Chicago Bears football, their second-year QB is a playmaking sensation, a former Georgia and OSU standout who earned the 2019 Big-10 Football Championship MVP and was a 2× Graham–George Offensive Player and a 2× Griese–Brees QB of the year.

The question is how that college talent translates at the pro level, and last year in his rookie debut, Fields was hot and cold, though many blamed the game planning of HC Matt Nagy and OC Bill Lazor who basically threw the young Fields into the pro mix and let rookie chaos unfold.

This futures bet takes a lot of faith in Fields’ development given that last season he thew for just 1,870 total yards in 12 games, which put him in line for a 2,600+ full season, far short of the total expected from him this year, but true Bears fans will have faith that this kid will improve.

See the full list of players who are most likely to pass for the most yards this season.

Use the promo code WSN15 when you sign up to Caesars Sportsbook and get a $1,500 risk-free bet.

This will be WR Darnell Mooney’s third NFL season – all with the Chicago Bears – and so far he has been an integral part of their offensive game plan, his targets increasing from his rookie year (98) to last season (140) as did his production, from 631 receiving yards to 1,055 last year.

The bet is about touchdowns, however, and in each of his first two seasons, Mooney posted four trips to the yard, so the bet here involves an additional two trips to the end zone, entirely possible given that QB Fields will be a lot more comfortable under center in his second season.

The Bears’ passing offense was ranked 30th last season after averaging just 189 yards through the air each game, a stat that is bound to improve due to an upgrade in the front line (LT Braxton Jones, OG Michael Schofield III, OT Riley Reiff, etc) done over this last offseason.