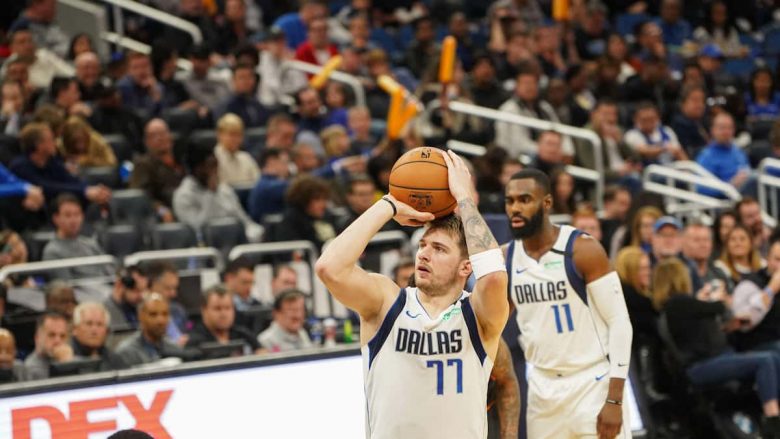 The Brooklyn Nets are on a roll, using their offensive talents to overwhelm teams. However the Mavericks can score the ball too, and their perimeter defense has been locked in over their eight-game run.

How can the Mavericks beat the Nets?

The Dallas Mavericks have a scoring machine in front of them when they take on the Brooklyn Nets. If they want to come out victorious, the Mavericks need to be aggressive on the glass – especially on the defensive end.

In losses, the Brooklyn Nets are beaten on the glass by an average of 43.3 to 46.2. Usually only running one center on the court at a time, the Mavericks’ multi-forward lineup should have the advantage.

The Mavericks’ defense will have their hands full with Brooklyn’s offense, so it is essential for them to finish each defensive set with the rebound. If they can’t compete with the Nets on the glass, Dallas’ offense might not be enough.

Luka Doncic ties the game up with this step-back 3! 💦pic.twitter.com/GF9Lb5UBAa

Luka Doncic continues to impress with his overall game and is leading the Dallas Mavericks up the Western Conference table. When he takes on the Brooklyn Nets, Doncic looks to maintain his own impressive scoring form.

The Nets aren’t known for incredible defensive standards, so Doncic should be able to find his shot with relative ease. With another guard in the lineup, his playmaking duties have taken a backseat. However, to make up for Dallas’ injury issues, Doncic will need to get his teammates involved.

How can the Nets beat the Mavericks?

The Brooklyn Nets are coming off of a massive victory in their last game. While Kyrie Irving led the way for them, the Nets were able to capitalize on his brilliance. In this meeting with the Mavericks, Brooklyn will need another performance with many contributors.

In their last game, a win over the Orlando Magic, the Brooklyn Nets were able to score 150 points – with Kyrie Irving accounting for 60 of those. However what was overlooked in their winning effort was the fact that Brooklyn had five players account for another 80, with each scoring 10-plus points.

Without Irving on the court in Brooklyn, expect Kevin Durant to take the lead instead. Ranking 19th overall in bench points per game with 35.3, the Nets will need to surpass their usual scoring effort to take down the Mavericks.

Barring any sudden changes in state legislation, it looks like Kevin Durant will be suiting up without Kyrie Irving for another game. When he takes on the Mavericks, he’ll need to maintain his efficiency without his sidekick.

In home games where Irving doesn’t play, Durant’s shooting percentages are slightly worse. Durant is shooting just 50.5% from the field and 34.5% from three-point range in home games, versus 53.9% and 40.0% in road games.

Durant’s such a talent that his scoring ability doesn’t falter much, but he does have better opportunities with Irving beside him. When he faces the Mavericks, Durant must not only score, but also create for his teammates.

How to Watch Dallas Mavericks vs Brooklyn Nets