Denmark Vs Spain Women’s Euro 2022: La Roja Should Get The Job Done 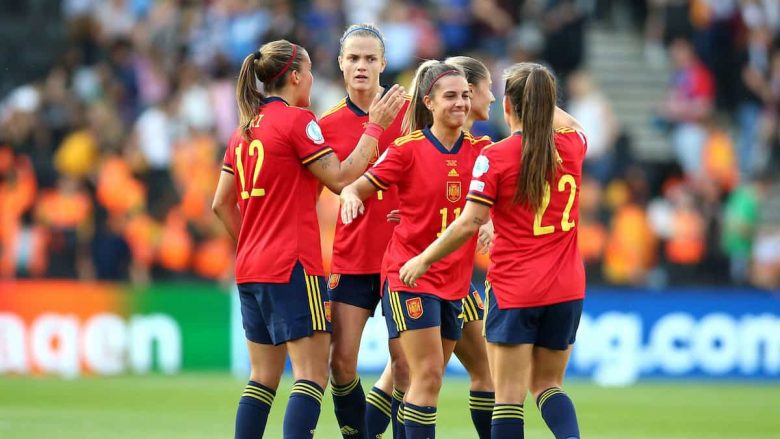 Spain Beaten by Germany and Still Need a Win to Progress

It was billed as the battle for top spot in Group B, and Spain came out second best. A 2-0 defeat by Germany on Tuesday means the pre-tournament favorites to win the Women’s Euro 2022 are not yet sure of their place in the knockout phase. A draw against Denmark would be enough for Spain to progress to the next round, and while it would be a huge surprise if they failed to pick up at least a point at the Brentford Community Stadium, La Roja go into this weekend’s clash under significant pressure.

Germany’s game against Spain was an intriguing one. A glance at the basic statistics would appear to suggest that Jorge Vilda’s side were unfortunate to end up empty-handed: they had more possession and took more shots than Germany, who committed more fouls and had fewer corners. But all that was, at least in part, by design. The Nationalelf were always going to have a smaller share of the ball than Spain, who tend to control possession in every match they play. Germany were not aiming to compete on those grounds.

Instead, they produced a tactically smart and ruthlessly efficient performance which saw them score twice in the first half and then shut up shop after the interval. Spain were certainly true to their style, but there was a need for more cutting edge in the final third: for all their possession, they managed just two shots on target. Vilda admitted afterwards that he would love for Spain to have Germany’s “ability to optimize their chances.”

All is not lost for Spain, but Tuesday’s defeat shows that those who crowned them champions-in-waiting were speaking prematurely. La Roja will probably get the job done against Denmark, but there are still question marks over this team’s ability to beat the very best in the women’s game in a high-stakes encounter. With England almost certainly awaiting in the quarter-finals, Spain will be tested by top-class opponents again soon.

Denmark Not Shone Yet but Could Still Reach Quarter-Finals

Denmark were the surprise package at Euro 2017, the previous edition of this tournament. They had reached the semi-finals four years earlier but few expected them to go one better in the Netherlands. After winning one and losing one of their first two group games – they have the same record this time around – Denmark beat Norway on matchday three to advance to the knockout phase.

From there they dispatched Germany, the eight-time European champions, in the quarter-finals, before overcoming Austria on penalties in the last four. That set up a final against the host nation. Denmark lost 4-2 but gave a good account of themselves in Enschede, taking the lead and then equalizing at 2-2 in the first half.

Their record in Euro 2017 shows that Denmark should not be written off, but they have yet to get going this summer. Lars Sondergaard’s side were well beaten by Germany in their opening game, going down 4-0 in London. They did beat Finland 1-0 last time out, but their performance was not overly convincing and it took until the 72nd minute for Pernille Harder to make the breakthrough.

Denmark may actually be better suited to the role of underdogs, but they must learn lessons from their thrashing by Germany if they are to stand a chance of pulling off a shock win here.

Spain have not started either of their matches so far as their manager would have liked. They fell behind to Finland within 49 seconds of kick-off in their first game of the tournament. Spain held out for a little longer against Germany last time out, but their opponents got their noses in front in the third minute. We can therefore expect a conservative start from Spain, who will no doubt be content to keep things tight in the opening few minutes.

Denmark, too, would settle for a low-scoring start if it means their opponents grow frustrated as time goes on. As we saw against Germany, Spain are technical masters who can keep the ball away from other teams at will, but they sometimes lack an ability to fashion clear-cut opportunities. That was not a problem against Finland but it could be an issue against Denmark.

All in all, Spain should find a way to get the job done and advance to the quarter-finals of Euro 2022. But they might not be ahead at the interval, so go for draw/Spain in the half-time/full-time market.

How to Watch Denmark vs Spain