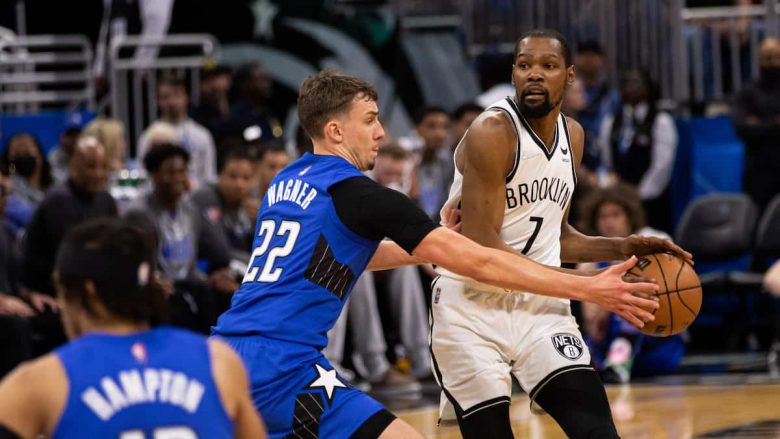 he Detroit Pistons showed some excellent resolve in their last game, despite the narrow loss. Brooklyn will be motivated by their tumble down the standings, and their newly healthy roster will be difficult for the Pistons to overcome.

Take a look at out our NBA betting bonuses and promo codes here!

How can the Pistons beat the Nets?

The Detroit Pistons will have their hands full when they face off against the Brooklyn Nets. Coming up against a veteran unit with motivations to improve their playoff position, the Pistons must tread carefully to find victory.

The Brooklyn Nets are incredibly talented. Filled with willing shooters, stars Kevin Durant and Kyrie Irving are spoiled for choice should they face double teams. Not only are they the best mid-range shooting team in the NBA, but they also rank 4th in the league in field goal percentage (47.4).

Detroit prefers to push their opponents out to the three-point line, due to their lack of shot blocking and rim protection. If they hope to beat the Nets, the Pistons need to push them out of their preferred offence.

The Detroit Pistons may have lost their last game, but they were able to find a season-best performance from Marvin Bagley III. The former 2nd overall pick has struggled to make an impact through his young career, but he has a real opportunity to star in Detroit.

In his last game, a 104-102 loss to the New York Knicks, Bagley III was the star of the show. The 4th year big man posted 27 points, 7 rebounds, and a block in 35 minutes of play. Off of Detroit’s solid passing play, Bagley was able to shoot an efficient 11 of 14 from the field.

The Brooklyn Nets are a strong all-around team, but have struggled with inconsistency. If Bagley can maintain his finishing consistency, Detroit’s offence becomes much more potent.

How can the Nets beat the Pistons?

On paper, the Brooklyn Nets severely outmatch the Detroit Pistons. However, they can’t take the 14th ranked side lightly. Detroit are an aggressive and energetic team, more than capable of exploding on the offensive end.

In their few victories, the Detroit Pistons use their ball movement to open up scoring opportunities. With only one true playmaker on the roster in Cade Cunningham, the Pistons need to move the ball with intent. In victories, Detroit average 26.3 assists on 41.5 field goals.

Brooklyn like to pressure the ball, but they don’t always recover well. Ranking 11th in the league in assists allowed, the Nets certainly have the standards to stop the Pistons’ offensive flow.

LOL Kevin Durant is wondering if Whiteside is serious pic.twitter.com/jJaNzt4XKc

The Brooklyn Nets have been carried to their current record through the efforts of Kevin Durant and his supporting cast. More often than not Durant will be brilliant in the clutch. However in his last game, Durant struggled to close the game.

In his last game, a loss to the Charlotte Hornets, Kevin Durant posted 27 points, 8 rebounds, 7 assists, and 2 steals. Unfortunately for the Nets, Durant shot just 9 of 24 from the field and 3 of 11 from three. His 1 of 8 shooting in the fourth quarter was Brooklyn’s downfall.

Against one of the worst defensive teams in the NBA, Durant should be able to get his shooting efficiency back on track. With the goal of climbing up the Eastern Conference standings, Brooklyn need Durant in top form to succeed.

How to Watch Detroit Pistons vs Brooklyn Nets