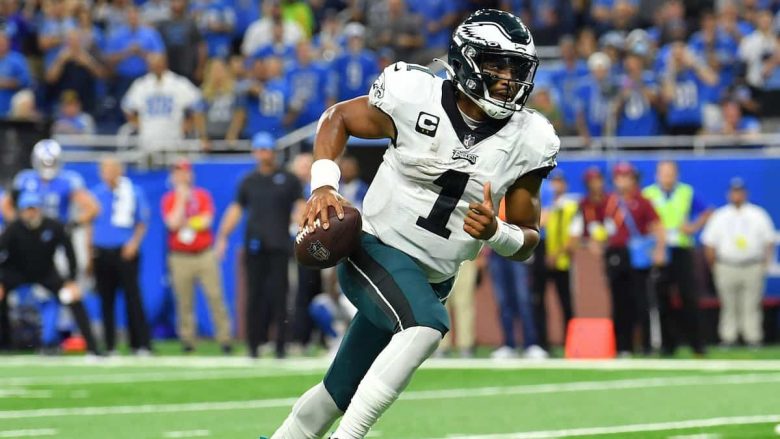 It’s early in the 2022 NFL season and the NFC East is still up for grabs so this Week 3 confrontation between the undefeated Philadelphia Eagles and the one-win Washington Commanders means a lot and it gives bettors the perfect chance to place some wagers.

The Philly Eagles are 2-0 but on a short week since they just played on MNF in Week 2 where they easily took care of the Minnesota Vikings, 24-7, a game in which Eagles mobile young QB Jalen Hurts showed off his ability to scramble out of trouble and into the end zone, twice.

The Washington Commanders now play QB Carson Wentz, so they need to improve their protection of him. He suffered five sacks last week and 11 QB hits. This is a surefire way for Wentz to be removed from the game. A team that needs a strong RB room to win this one-off contest.

For more tips and betting advice, check our NFL parlays.

Can the Eagles dual threat QB Jalen HUTS sustain his style of offense?

Jalen Hurts demonstrated his skill in getting into the endzone twice last week. This makes it difficult for defenses to defend. So expect Commanders Jack Del Rio to create something special to stop Hurts’ mobility. Brown, DeVontaSmith, Watkins, and TE Dallas Goedert.

Can Commanders Veteran QB Carson Wentz Get His Groove Back?

Now in his seventh season, Commanders QB Carson Wentz has found his third NFL home in Washington, and he is on his way to earning his own team again after leaving the Philly Eagles where he won a Super Bowl ring and then a quick one-season pit stop in Indianapolis in 2021.

Last week in a loss to the Detroit Lions, Wentz played well enough to win (30/46, 337 yds, 3 TDs, INT) but he was having trouble staying upright after getting sacked five times and suffering 11 QB hits, far too much damage to be inflicting on such an injury prone player as he.

Eagles key player: (CB). Darius Slay If you’re looking for a veteran cornerback, look no further than Darius Slay. This former Mississippi State linebacker was a first-team All-Pro in the NFL and a Pro Bowler.

Last Monday night went particularly well for Slay as the team beat up on the Minnesota Vikings, posting 2 interceptions, 5 passes defended (which now leads the league) and a tackle, the 31year old former NFL interceptions co-leader (2017) is one to watch during this matchup.

Slay will most likely be assigned to Washington WR Terry McLaurin, a speedy and consistent route runner who already has six catches on the season, his longest a 49-yarder, all the better for CB Slay who will be able to count on help from S C.J. Gardner-Johnson for the deep balls.

This is Washington Commanders RB Antonio Gibson’s third NFL season, and he is following up a 2021 campaign that had him posting 258 carries for 1,000+ yards and 7 TDs after a 170 carry and 11 TD rookie season so it’s surprising that his 2022 has started out so relatively slow.

Gibson has 28 carries for 86 yards and a TD so far in two games and he is part of a rushing attack currently ranked 25th in the league after averaging 86.5 yards on the ground per game, this team in need of a productive backfield if QB Carson Wentz is to be productive as a thrower.

The 24-year-old former Memphis standout was a third-round-pick that continues to pay off, his 6′ 2″ 220-pound frame and blazing 4. 39 second 40-yard dash speed makes Gibson tough to tackle and catch on the open field, and now he will face the Eagles defense starring DT Fletcher Cox.

How to Watch Eagles vs Commanders

What Philadelphia Eagles vs Washington Commanders Where FedExField in Landover, Maryland When Sunday, September 25, 2022; 1: 00 PM ET How to watch FOX