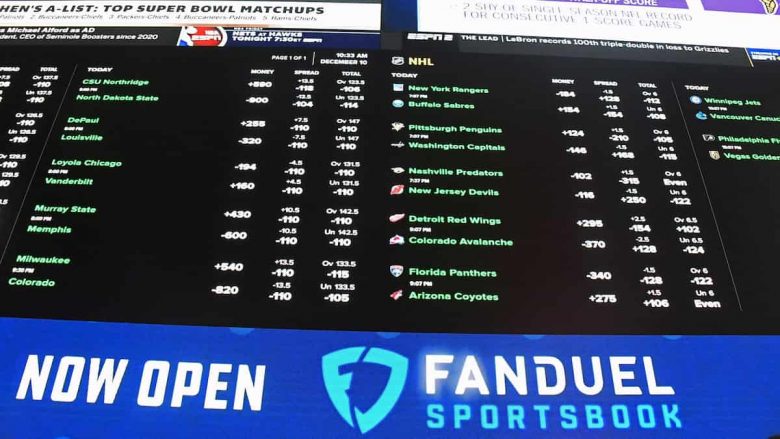 FanDuel Becomes First US Sportsbook to Report a Profitable Quarter

Since June 2018, US states have been allowed to legalize, regulate, and tax their own sports betting market thanks to the Supreme Court overturning PASPA, and in that time over thirty states and DC have done just that and together that market has generated a $146.2B handle.

That amount of money being wagered has resulted in almost $10.5B in total revenue of which $1.6B has gone towards taxes benefitting residents of each of those states, and at the center of all that money changing hands is the FanDuel sportsbook handling the majority of that action.

That’s according to their majority owner – Flutter Entertainment – who just announced that they have become the first US sportsbook to report a profitable quarter, though chances are whoever was taking all those bets prior to 2018 was also able to do well for themselves.

Less than a year into her job as CEO of @FanDuel and @AmyHowe earns bragging rights. In the 2nd quarter- FanDuel has captured more than half the (legal) online sports betting market in the US and positive EBITDA of $22million- announced in parent co. Flutter’s earnings report. pic.twitter.com/LW78ODcAZE

FanDuel announced that during its first quarter of 2022 it closed with $22 million in EBITDA (earnings before interest, taxes, depreciation and amortization from its sports betting and iGaming operations), a clear sign that the company is doing things right.

According to CEO, FanDuel is ”Claiming a 51% Share of the Sports Betting Market”

One of the benefits of legalizing sports betting in each state is that it opens up the competition between sportsbooks, and that benefits the consumer since those companies will adjust their odds, benefits, and freebies accordingly to attract new customers and keep the existing ones.

But all sportsbooks are apparently not created equally, as FanDuel seems to be the only one bragging about its recent profits and the company’s CEO Peter Jackson told the press that Flutter Entertainment’s brand is now No. 1 in the US gambling market:

“We are particularly pleased with (the) momentum in the US where we extended our leadership in online sports betting, with FanDuel claiming a 51% share of the market and number one position in 13 of 15 states, helping contribute to positive earnings in Q2.”

One major reason FanDuel is so successful is that it has expanded fast into all these new and growing sports betting markets, and now it accounts for a third of its parent company’s revenue, a ‘too big to fail’ operation that has a unique way of enlisting new bettors.

Before there was legal sports betting there was legal daily fantasy sports, and what FanDuel figured out before many of the other sportsbooks was how to convert those fantasy players into sports bettors, a necessary transformation if that company was going to compete well.

FanDuel has converted 60% of its fantasy sports players into sports gamblers who now use those same apps to make wagers on games, ease of use that those sportsbooks who hadn’t built up a fantasy sports customer base could not utilize.

Now FanDuel is getting a reputation as being one of the major players in that industry, with sports betting reporter Ryan Butler calling them part of the “Big Four,” though he’s quick to point out:

As of now, it’s FanDuel and then everyone else. Their parent company’s report today showed some of the strongest numbers any US sportsbook has seen in the four+ years since single-game wagering was permitted outside Nevada.

That’s good news for FanDuel, and that should end up being even better news for their customers.