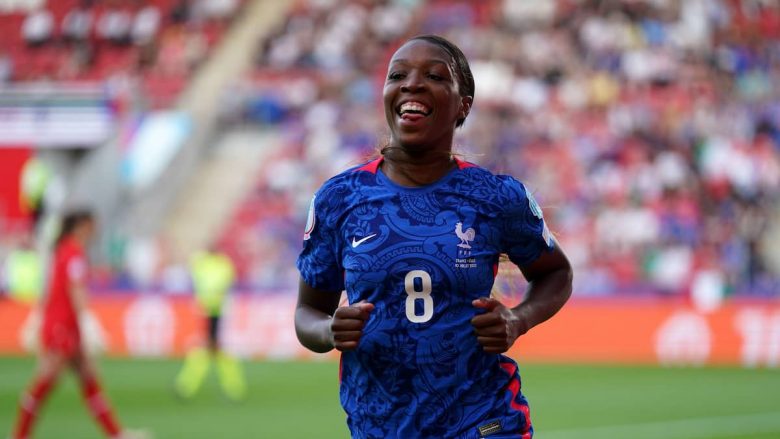 France Deliver Statement of Intent in Their Opening Match

Maybe togetherness is overrated. No one doubted the talent within this France squad going into the Women’s Euro 2022, but there was a big question mark over the spirit within the camp. Corinne Diacre, the manager, is a divisive figure who has fallen out with several of her players over the years. Some members of the current France squad are said to dislike their boss, who left behind Amandine Henry and Eugenie Le Sommer on account of personal differences between the pair.

An opening game against Italy was therefore billed in some quarters as a potential banana skin. Sure, the Azzurre cannot compete with France in terms of ability, but organization, discipline and camaraderie is a recipe for inferior teams to frustrate superior ones that have problems within the camp. Italy were not widely expected to win, but it was anticipated they would make life difficult for their more illustrious opponents.

It did not turn out like that. France were magnificent on Sunday. They blew Italy away, winning 5-1 and delivering an emphatic response to their doubters. International tournaments take on a life of their own and the well-publicized issues within the French setup could ultimately prove a barrier to victory. There was no sign of that being the case against Italy, though, and les Bleues will aim to continue in the same vein when they return to the New York Stadium later this week.

Diacre, quite sensibly, warned her charges not to get carried away after their thrashing of the Italians, but even she seemed to get a little overexcited by suggesting France had five more games to play this summer (that will be the case only if they reach the final).

We are staying focused, we have our heads down and it’s only the first game, we have five others, she said. We want to be vigilant.

Belgium May Adopt Stance of Damage Limitation on Thursday

Belgium drew 1-1 with Iceland on matchday one, a result which neither team will be too pleased with. These two sides are probably the weaker pair in Group D, so their chances of a surprise quarter-final appearance would have been boosted by a victory in their opening game. Belgium did at least fight back from a goal down, with Justine Vanhaevermaet leveling the scores from the penalty spot midway through the second half.

Ives Serneels now has the unenviable task of preparing his team to try and halt the France juggernaut. Belgium will probably adopt an approach of damage limitation from the first whistle. They will look to slow the game down and frustrate France, who could get desperate if the game stays at 0-0 for too long. That might present an opportunity for Belgium to hit les Bleues on the counter-attack.

For Serneels’ side to cause an upset in Rotherham, everything would have to go their way. It is hard to see that happening, but goal difference could yet be a factor in determining who goes through to the knockout phase. Belgium therefore have an incentive to keep the score down, even if they are unlikely to avoid defeat by France.

France Can Match the Italy Performance in Their Second Game

France came flying out of the traps against Italy, with all five of their goals coming before half-time. Diacre will encourage her team to make a similarly fast start here, and it is doubtful that Belgium would be able to resist if France hit top form again. The fact that Grace Geyoro, a midfielder, was the woman who notched a hat-trick last time out is yet more evidence of the depth of attacking talent France have at their disposal.

A win here for les Bleues would see them through to the knockout phase with a game to spare. It could also in effect guarantee top spot depending on the result of Italy vs Iceland, which takes place a few hours before this match. Wrapping up first place at this stage would be a boost to Diacre, who would then be able to rest some key players on matchday three ahead of a quarter-final potentially against Sweden or the Netherlands.

It is hard to see how Belgium will be able to keep France out in this one. Even if they are able to hold out for much longer than Italy did, the superior quality of their opponents will surely tell before the 90 minutes are up. Given the strength of their display on Sunday, over 2.5 goals for France looks like a steal at +100.

How to Watch France vs Belgium