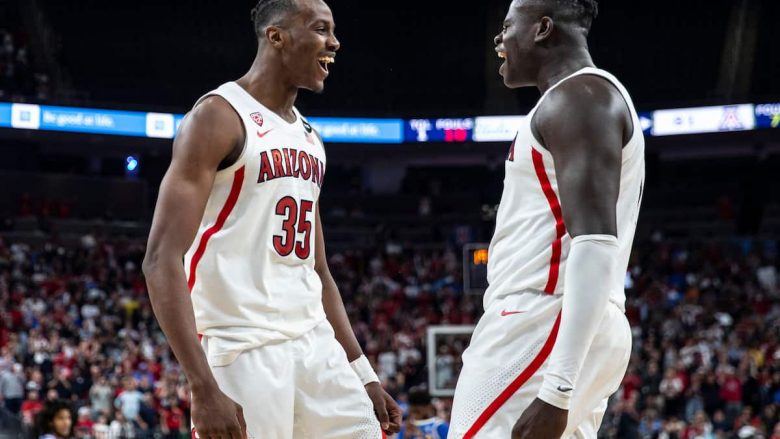 The Houston Cougars will face the Arizona Wildcats in an interesting Sweet 16 battle. These teams have not played each other since 2009, when Arizona won 96-90.

The Houston Cougars have been one of the most successful teams from the Group of Five conference. They went 16-2 in non-conference play, with their only losses coming against ranked Alabama and ranked Wisconsin. They continued to be successful in conference play. They went 15-3 against conference opponents and had a couple of long winning streaks.

Houston entered March Madness with a 5 seed in their area. They faced the UAB Blazers in the First Round and won 82-68. Kyler Edwards led all players in scoring with 25 points on 9-15 shooting. He was shooting from deep, going 6-8 from the behind-the three-point line. Houston shot well as a team and went 10-21 from deep.

Houston faced a much more challenging matchup with the Illinois Fighting Illini during the Second Round. They won 68-53 behind Taze Moore’s team-leading 21 points. Moore could not be stopped and went 9-16 from the field. Houston played smothering defense in this game and held Illinois to 53 points on 34% shooting.

Houston has both a strong defense and an aggressive offense. They only give up 59 points per game. They are the fourth-lowest team in the country.

The Arizona Wildcats have been ranked as the #2 team in regular season. Arizona won all of its non-conference games and lost only one. They continued to impress conference rivals. They went 18-2 in conference play, with their only losses coming against UCLA and Colorado.

Arizona was a top seed in March Madness. They faced the Wright State Raiders in the First Round and won handily 87-70. Four starters scored 13 points or more, and center Christian Koloko took over this game. He scored 17 points on 7-10 shooting, grabbed 13 rebounds, passed for six assists, and came up with five blocks. In a close match,

Arizona has one of the top offenses in the country and scores 84.6 points per game. They will win the game thanks to Christian Koloko’s heroics and Bennedict Mathurin.

Bet on Houston vs Arizona Here

The Arizona Wildcats are the toughest opponent for the Houston Cougars. They can still win as long as they keep the ball at the rim, and they make free throws.

Houston is not small, but it’s smaller than Arizona. The Houston team must defend the rim from the Arizona big men, and make it difficult for them to score inside the paint. This will be difficult, as Arizona has a 6’11” forward in Azoulas Tubelis and a 7’1″ center in Christian Koloko.

The Arizona Wildcats are favorites but Houston has a lot more momentum. The Wildcats must make outside shots as well as create turnovers.

Arizona shoots pretty well from behind the three-point line; they hit 35.6% of their three-pointers. The Houston team is a tough opponent. Houston might be able stop Arizona scoring at the rim. The Wildcats must be able hit threes.

Arizona has poor defense but is facing a Houston team capable of scoring. They must steal the ball from Arizona and restrict their scoring chances. Arizona’s defense needs to be more aggressive and cut down on passing routes.

Taze Moore has not been the primary scorer for Houston this season. He was unable to stop them in the final game. He finished with 21 points and seven rebounds.

Moore must continue to take good shots and grab rebounds. His opponent will be larger Arizona players so he needs to box them out.

Christian Koloko) Koloko is one the dominant centers of the country. He has increased his dominance in March Madness. He is averaging 22.5 points, 12.5 rebounds, 4.0 assists, and 4.0 blocks in the last two games.

Koloko must continue to play great basketball both on the court and off it. Arizona will be great if he continues to play the same way as he did the previous two.

How to Watch Houston Cougars vs Arizona Wildcats