Iceland Vs France Women’s Euro 2022: France Have Plenty Of Quality In Reserve 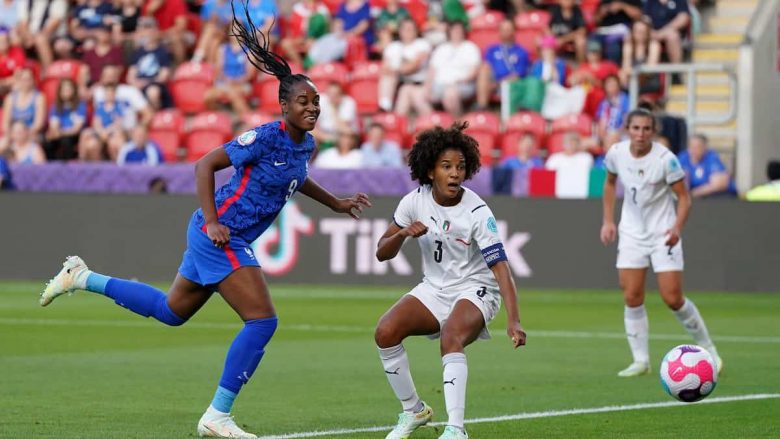 France Through to Knockout Phase Where Sterner Tests Await

France were one of three teams, along with Germany and England, to advance to the knockout phase of the Women’s Euro 2022 after just two rounds of group games. All three of those sides have already wrapped up top spot in their respective groups, so there is little for them to worry about heading into matchday three. That is not to say England, France and Germany will be taking it easy in their upcoming contests, but the stakes are certainly less high than they are for the likes of Spain, Denmark, Sweden and the Netherlands.

In terms of talent, few teams at this tournament can match France. Yet before a ball had been kicked, there were concerns about whether this side would be able to fulfill its potential. There have been well-documented clashes between Corinne Diacre and some of the French players, a situation which led to the exclusion from the squad of high-profile players like Amandine Henry and Eugenie Le Sommer. There are still some worries that the tension bubbling under the surface could spill over.

Still, it would be churlish to focus on the negatives when France have won two games out of two. Their stunning 5-1 thrashing of Italy on Sunday was the highlight, with all five of les Bleues’ goals coming in the first half. Had they not taken their foot off the gas after the break – an understandable move given the margin of their lead – they might easily have got into double figures against opponents who had been tipped as potential dark horses.

Matchday two brought a closer affair in terms of the scoreline, but it was still a straightforward victory for the French. The underlying statistics serve as evidence of that: France took 20 shots to their opponents’ one, and nine of their efforts found the target. Add a missed penalty into the mix and this easily could have been another thrashing.

Like France, Iceland are unbeaten so far at this European Women’s Championship – but unlike their upcoming opponents, they cannot yet celebrate a place in the quarter-finals. In fact, Iceland will probably need to win this match in order to advance to the next round. A draw would be enough only if there is no winner when Italy take on Belgium in Manchester, a game which kicks off at the same time as this fixture in Rotherham.

Iceland began their campaign with a 1-1 draw with the Belgians. It was a result which would have pleased the latter more than the former, with Berglind Thorvaldsdottir missing a penalty in the first half as Iceland took control of the game. Belgium grew stronger as it wore on, though, and in the end they did enough to pick up a point.

The scores also finished level in Iceland’s second game of the summer. Again they took the lead, this time through Karolína Lea Vilhjalmsdottir. And again they could not hold onto that advantage, as Italy struck back through Valentina Bergamaschi in the second half.

Iceland have work to do when it comes to protecting leads, but they might not have the chance to make it third time lucky on Monday: France’s backline will be much more difficult to penetrate than that of their two opponents to date.

Rotated France Likely to Have Too Much Quality for Iceland

Playing the strongest team in the group last is often seen as an advantage. Iceland will be pleased that France are already through and have wrapped up top spot with a match to spare. That increases the chances of Diacre resting key players. Marie-Antoinette Katoto, France’s star woman, suffered an injury against Belgium – making it even more likely that les Bleues will look to protect some of their main players.

But even if Diacre does choose that path, France have plenty of quality in reserve. The incoming players would be keen to make an impression ahead of the knockout phase – if a deputy forward scored a hat-trick against Iceland, for instance, it would be hard to leave her out in the quarter-final.

From an Iceland perspective, it is difficult to know what the best approach to this match would be. Sit back and they risk being overrun by a thrilling France attack. Try and take the game to Diacre’s side and they could be torn apart in transition.

Iceland have performed creditably so far, but les Bleues are a different beast to Belgium or Italy. Back France/France in the half-time/full-time market.

How to Watch Iceland vs France