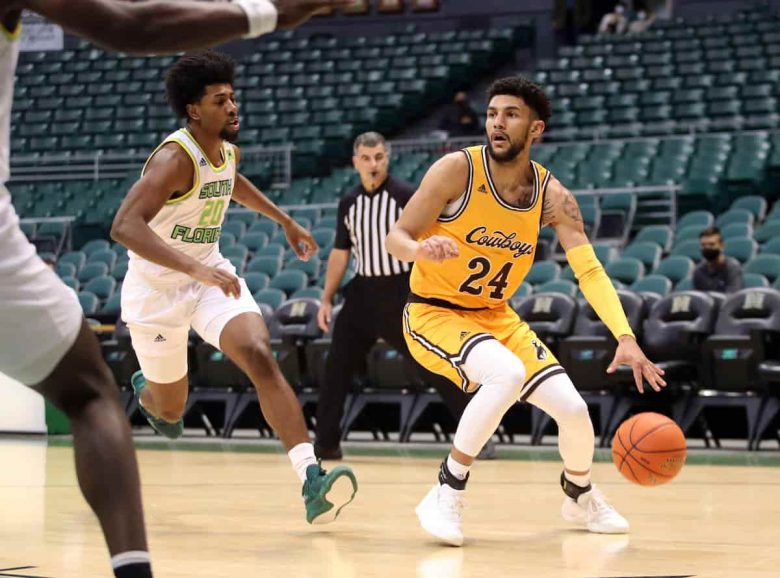 The Indiana Hoosiers will meet the Wyoming Cowboys for a First Four game in Dayton, Ohio. Neither team has home-court advantage, but Indiana might have more home fans that traveled from one state away.

Whatever success Indiana has had so far, they owe mainly to forward Trayce Jackson-Davis.

He is also the most efficient shooter and hits 58.9% of his shots. Jackson-Davis’ impact on both sides of the floor is massive, and Indiana would not be competing in March Madness without him.

The Wyoming Cowboys had a strong season in a pretty talented Mountain West Conference. They went 13-5 in conference play and 12-3 in non-conference play.

They had some questionable play at the end of the season but have a talented roster. The Cowboys depend on three players a lot.

Those players are Graham Ike, Hunter Maldonado, and Drake Jeffries. Ike plays the least of these three at 31.7 minutes per game but may have the most significant impact; he scores 19.6 points per game and grabs 9.6 rebounds.

He does not shoot well from behind the three-point line, but he hits over half of his shots from the field. Ike gets a lot of help from guard Hunter Maldonado. Maldonado can score and pass well. He contributes 18.4 points per game and finds his teammates for 6.3 assists. Maldonado barely steps off the floor and plays 37.2 minutes per game. Maldonado is joined in the backcourt by Drake Jeffries.

Jeffries can score a little bit and grabs rebounds, but he is mainly a complementary player to Maldonado. Jeffries is the best three-point shooter on this team and hits 42% of his three-point attempts. The Cowboys are the underdogs, but they have more scorers than Indiana. I am picking them to squeak out a win and go on to the First Round.

Bet on Indiana vs Wyoming Here!

The Indiana Hoosiers are the favorites, but not by a lot. They have to separate themselves from Wyoming by hitting threes and playing team offense.

Indiana’s offense is centered around Trayce Jackson-Davis. Wyoming will probably try to stop Jackson-Davis, so the rest of the offense needs to be ready to get involved.

The Wyoming Cowboys may be the underdogs, but they can win this game if they slow down Trayce Jackson-Davis and create turnovers.

Trayce Jackson-Davis is the lifeblood of this Hoosiers squad. He is an incredibly talented player on a team that lacks scorers. Since that is the case, Wyoming needs to make him priority #1. They have to force him to take bad shots or pass to his teammates. If they do, Indiana will struggle to score.

Wyoming struggles to create turnovers; they only average four steals a game. The Cowboys need to be more active and cut off passing lanes against Indiana. If they do, they will create turnovers and limit the Hoosiers’ scoring opportunities.

I have sung Trayce Jackson-Davis’ praises throughout this article. I will not recap his stats (you can find them above), but I will say that Jackson-Davis is the engine of the Indiana offense and defense.

Jackson-Davis does it all, which is why he is the Hoosiers key player. He needs to be ready to have the game of his life against Wyoming. If he does not, the Hoosiers season may end tomorrow.

Guard Hunter Maldonado is a workhorse for the Cowboys. He plays 37.2 minutes per game, but I would not be surprised if he does not step off the floor in this game.

Maldonado can do a little bit of everything; he averages 18.4 points, 5.8 rebounds, 6.3 assists, and 1.2 steals. He is not as impactful as Jackson-Davis is for Indiana, but he is a key piece to this Wyoming team.

Bet on Indiana vs Wyoming Here!

How to Watch Indiana Hoosiers vs Wyoming Cowboys