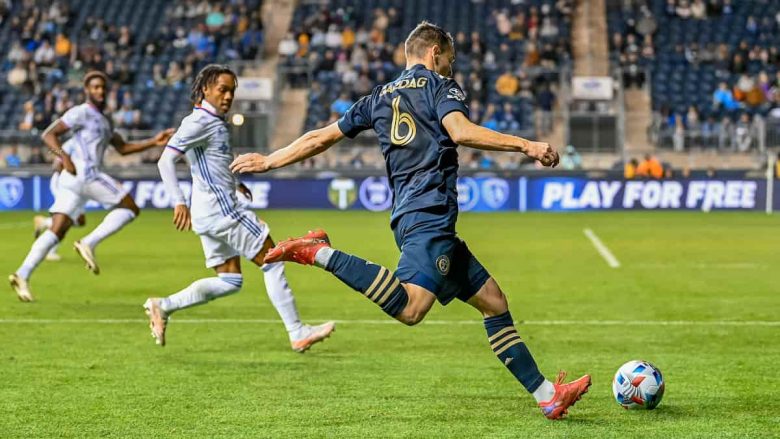 Inter Miami were still finding their feet in the MLS and now seem to have settled down. The two sides last met each other in May in a match that ended in a goalless draw. Fans will be hoping it’s a more exciting game this time around but a similar result isn’t completely off the cards. The sides have only faced each other six times before. Philadelphia Union have the superior record with three wins, two draws and one loss. They’ll head into this match as the clear favorites.

Take a look at our guide on how to bet on soccer, here!

Inter Miami’s only win in this fixture came last April – it was a tight affair with Miami winning 2-1. Union had won their first three games quite comfortably but haven’t gotten the better of Miami since that defeat. They’ve faced the side owned by David Beckham twice since and drawn both times.

Inter Miami will be far more confident going up against one of the best sides in the league based on their recent meetings. Despite the previous outing ending 0-0, both sides had their fair share of chances. The post denied both sides and Inter Miami goalkeeper, Drake Callender, put on one of his better performances for the season.

Union were the better side on the day and would’ve been a bit disappointed to not have got all three points but will be quietly confident that they can do the job this time around. Daniel Gazdag was a menace all day. Union pressed and harried Inter Miami in the build-up to fashion some of their best chances in the game and will probably use the same strategy this time around.

Inter Miami will be hoping that they’re a bit more precise in their build up play unlike last time. They can’t afford to self-inflict damage in what is turning out to be another underwhelming season.

Inter Miami Have Still Not Got Going

The side conceded an own goal in extra-time in their last game, which does a good job of summing up some of the problems they’ve had all season. They currently sit in 10th position but are still in with a chance of making the playoffs. They’ve got a game in hand compared to most other sides in the standings and getting a win against a side like Philadelphia Union will give the side a massive uplift. Having said that, there are not a lot of reasons to feel like they’ll achieve the feat, having picked up just one victory in their last four matches.

This is side with the third highest payroll in the league and it looks like no matter what happens going forward, David Beckham might be forced to part ways with his former teammate Phil Neville if this continues. The team has settled down a little now after a tumultuous first season and disastrous start to this one, but there haven’t been massive improvements on the field to suggest that things are working cohesively. This is a side with massive ambition and Neville will have to get them to a playoff spot at the very least to say it’s a job well done.

Unlike most other sides, they don’t press as intensely and have no clear patterns in their passing, often relying on Gonzalo Higuain to link things in the final third. For a man who was a poacher in his heyday, Miami are asking a lot of him with such an unfamiliar role, although they’ve been less reliant on him this season.

Leonardo Campana Has Stepped Up

Despite all the issues in the other areas, Ecuadorian forward Leonardo Campana hasn’t done too bad himself. This is a side that has only scored 18 goals and he’s scored eight of them. This is even more impressive considering the side lacks an out and out offensive creator. He also works as a bit of a target man for the side, which shows just how valuable his overall contribution has been to the team.

Inter Miami are four points behind 7th place FC Cincinnati with a game in hand but it’s hard to see them closing the gap by winning this game.

Philadelphia Union Will Back Themselves to Go All the Way

Despite league leaders LAFC’s recent transfer business, Philadelphia Union will still believe that they have all the tools to win the MLS Cup. They gave everyone in the league a look at just how dangerous they can be when on song by dispatching D.C. United 7-0 in their last game. Julian Carranza scored his first hat-trick for the club in what was a MLS record win for the side. LA Galaxy still hold the record for the most goals in a game when they beat Dallas Burn 8-1 in 1998.

Find out who is the top pick for MLS 2022 Outright Winner, here!

The Goals Are Being Shared

Manager, Jim Curtin, will take great pride in seeing that all his forward players are in decent nick. Unlike Inter Miami, the Union haven’t relied on any one player for all their goals. Daniel Gazdag has been the pick of the bunch with seven goals and four assists but Carranza hasn’t been too far behind with seven goals and three assists. Kai Wagner has been the creator in chief with five assists and Alejandro Bedoya has chipped in with five goals and two assists.

This is the best team the Union have assembled in some time. They currently sit in second place on the Eastern Conference standings despite being tied on points with the New York Red Bulls. They have a much better goal difference and a game in hand, however.

The seven-goal winning margin will take up all the headlines but their defense is at the heart of everything good about this side. They’ve conceded the fewest number of goals in the league so far with only 13 from 19 games. This has also allowed them to enjoy the best goal difference in the league of +16. Prior to this 7-0 rout, the team was having way too many tight games, and seeing the goals flow in like this will be a big relief for fans and the manager.

Losing Brenden Aaronsen will be a big loss to the Philadelphia Union but it’s something they’ve probably prepared for as the attacking midfielder has moved to Leeds United. This is a highly passionate side that will be looking to build on from this match, and are facing a side with a fragile confidence about it. If Inter Miami face anything like the Philadelphia Union side from a few days back, they’ll be in big, big trouble.

How to Watch Inter Miami CF vs Philadelphia Union