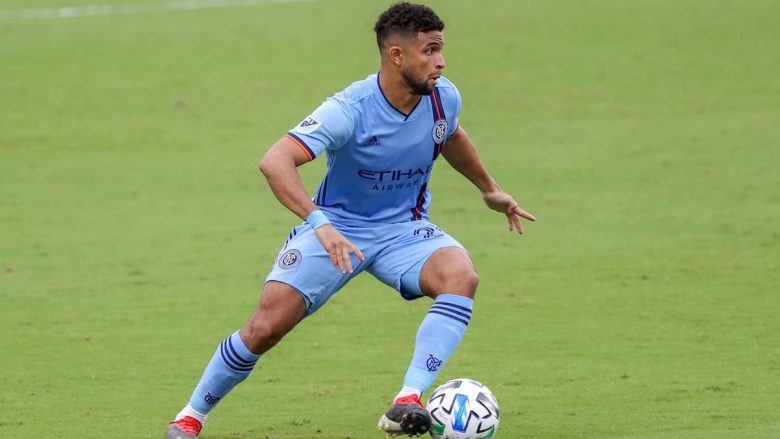 Check out our free guide on how to bet on soccer, here!

Inter Miami is still relatively new to the league, and this will their sixth meeting. New York City FC is the clear favorite to win this match despite losing their last one. New York City FC have also scored 11 goals in those 5 games compared to Inter Miami’s 3. This match will only be decided by one side.

The previous match between the two sides was won by New York City FC 2-0. The game took place only two weeks ago with New York City FC taking charge of proceedings by scoring in the 18th minute, thanks to Maximiliano Moralez.

Valentin Castros thought he had scored the second goal of the night for the defending champions. However, the goal was disallowed. Inter Miami hit the post in the first half but hardly threatened the goal despite having 56% of the possession in the match. New York City FC only needed 44% and were in control of the game with Heber’s goal in the 75th minute making sure they took all three points with a clean sheet.

Inter Miami was forced to tie twice against CF Montreal’s last match in a thrilling 2-2 draw. Gonzalo Higuain was once more in the scoring column after scoring a hat trick against FC Cincinnati just a few weeks back. Emerson Rodriguez also scored to secure the draw that gave them hope for the playoffs.

Things are really tight at the moment in the Eastern Conference with four teams on 30 points. What makes this even more interesting is that there’s only a difference of five points between the team in 5th and 12th. Inter Miami is sure to win every game.

They’ve invested a lot and clearly have a lot ambition. David Beckham is in charge. Phil Neville was under constant pressure this year to deliver results. The team’s victories against San Jose Earthquakes, and their fight against CF Montreal will lift the spirits. They’ll also need Gonzalo Higuain to keep up this pace if they want to reach the playoffs.

Defense Is Still A Massive Headache

Inter Miami’s tide hasn’t turned. Their conceded goals are still high, and they need to make comebacks. They’ve conceded 39 goals so far in the league and the team needs to get together as a group and make themselves hard to beat before thinking about attacking in numbers.

There’s nothing in the underlying numbers to suggest that they’ve been unfortunate here either with an expected goal against value of 35 for the season. With Gonzalo Higuain having difficulty finding the back of his net, the goals haven’t come this season. Although he’s had a great scoring streak recently, they cannot afford to lose it. There are very slim chances that he will make the playoffs. It will be difficult to face New York City FC in the next round.

It was a surprise for MLS viewers that New York City’s seven match unbeaten streak ended in an entertaining 2-3 defeat to Columbus Crew. New York City FC will be slightly concerned as they drew that match. The team will have doubts after Valentin Castellanos’ departure. However, this match against Inter Miami should motivate them to prove their worth.

Brazilian forward Heber will need to prove that he can handle the job of getting the ball into the net after Valentin Castellanos loan move to Girona, a Spanish soccer side. Heber is up to a goal score of 3.7 this season, having scored six goals.

That’s too little for now. Thiago, Talles Mago, Gabriel Pereira and Talles Magno are his teammates. They will need to contribute more goals. The three players have scored 14 goals as a combo, which is one more than the number of goals Castellanos scored before moving out on loan.

The team still leads for goals scored in the Eastern Conference with 43 so far and will have to keep that up if they are to retain their MLS crown. Sometimes losing a top player is a positive thing. Their goals are distributed more evenly and the team will have to continue looking at the positives.

Los Angeles FC Looks Like They’re in a Different Tier to Everyone else.

For what it is worth, New York City has the highest underlying numbers in MLS. They will be aware of the fact that having the best stars does not guarantee success. New York City has been the home to many in the past. They have an expected goal differential (expected goals – expected goals against) of +19.1, which suggests that they’re putting in the best performances of any side in the league. Los Angeles FC are the second best according to this metric but are quite a distance away with +13.6.

Not being the dominant favorites may help relieve some of the pressure associated with the defense of the title. New York City FC must use this advantage.

Defensive midfielder Keyton Parks has been out since late June with surgery. For the moment, there is no return date.

How to Watch Inter Miami vs New York City FC