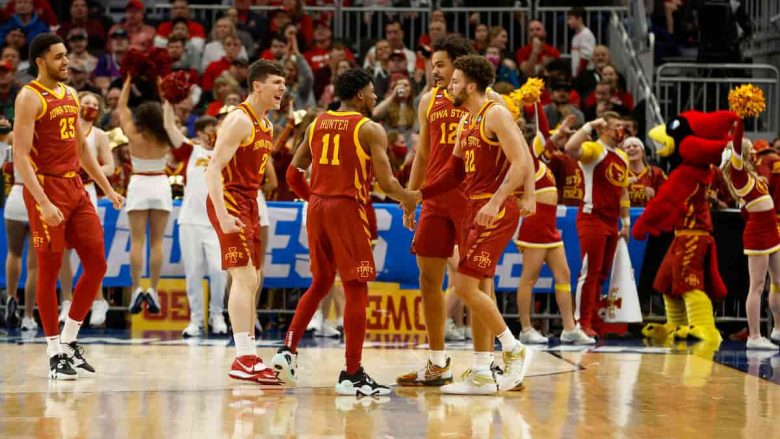 The Iowa State Cyclones will battle the Miami Hurricanes in this Sweet 16 game. These two teams faced each other once before in 2016, and Iowa State won 73-56.

Iowa State faced the LSU Tigers during the First Round. It was a low-scoring battle, and the Cyclones led 24-19 at the half. The Cyclones won 59-54 behind Tyrese Hunter and Izaiah Brockington’s combined 42 points. Tyrese Hunter could not be stopped from deep and went 7-11 from behind the three-point line.

The Cyclones defeated the Wisconsin Badgers in Round 2. This was also a low-scoring game with only 103 combined points. Iowa State was victorious 54-49. Gabe Kalscheur led Iowa State in scoring with 22 points. He went 10-19 from the field. These first games revealed that Iowa State doesn’t have an outstanding offense. However, they have a top-20 defense and the third-best in the Big 12.

The Miami Hurricanes were largely unnoticed for the majority of their season. While they performed well against non-conference teams, the Hurricanes struggled with ACC play.

The Hurricanes defeated the USC Trojans during the first round. They got off to a quick lead and led 31-20 at the half. USC came back in the second period and nearly sent this match to overtime. Miami pulled out a 68-66 win in an exciting First Round battle. Guard Isaiah Wong had a huge game and had 22 points in 24 minutes. Wong went 8-9, and he got to the free-throw line quite often.

Miami faced the 2nd-seeded Auburn Tigers. The game was close at halftime, and Miami had a 33-32 lead. However, the Hurricanes pulled away in the second half and won 79-61. Isaiah Wong led all scorers with 21 points. Six rebounds were also his forte.

Miami scores almost 75 points a game but is going up against an Iowa State squad with a great defense. Because I strongly believe that defense wins championships, I’m picking Iowa State to win this low-scoring match.

Iowa State is facing a Miami team that knows how to score; Miami scores almost 75 points a game and has four players averaging ten points or more. Miami, however, is guard-heavy and has four of their top scorers as guards. They must stop guards scoring from the rim. If they are unable to score at the hoops, they will make them pass outside.

The Cyclones are known for turning the ball over quite often. They average 13.8 turnovers a game and have three players averaging two or more turnovers. They need to become smarter and less lenient on offense. They will have more scoring chances if they can do this.

Miami is the favourite to win, but they will have to find a way to score against a tough Iowa State defense. They need to find the extra pass, and make three-pointers.

The Hurricanes are good at passing the ball. They average 14.0 assists a game, and their best passer, Charlie Moore, averages 4.6 assists. This game, they need to pass more and find the extra man.

The Hurricanes are able to shoot well from the deep. They hit 35.3% of their three-pointers. These three-pointers are still needed.

Gabe Kalscheur only scored four points in the First Round. He came up big in the Second Round and had 22 points in 34 minutes.

Kalscheur is the star and must keep getting great shots. Kalscheur is heavily dependent on Iowa State’s ability to score.

Isaiah Wong is coming off a 21-point performance against the Auburn Tigers. He went 8-18 from the field and 5-5 from the free throw line in that game.

Wong must continue to find ways to score. Miami would be well served if he succeeds.

How to Watch Iowa State Cyclones vs Miami Hurricanes