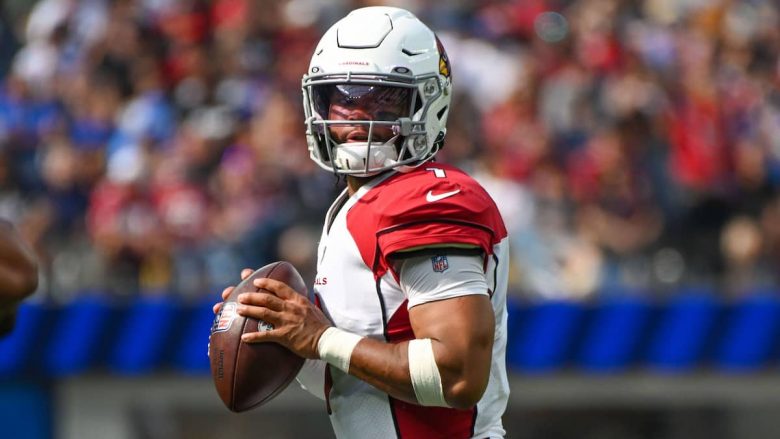 The two best NFL divisions in 2022 are the AFC and NFC West, so expect this Week 1 clash between Patrick Mahomes and his KC Chiefs and Kyler Murray’s Arizona Cardinals to be as epic as it gets, two teams missing their star receivers for this game so others must step up.

The Chiefs no longer have Tyreek ‘Cheetah’ Hill on their roster to stretch out the defense on the field, and the Cardinals will be without their veteran star receiver DeAndre Hopkins who was suspended six games for testing positive for a banned performance-enhancing substance.

Both of these teams are talented and it could be down to Andy Reid, the Chiefs’ veteran HC, to beat Kliff Kingsbury (a matchup that offers plenty of betting possibilities so shop around).

When the Chiefs started last season with a 3-4 record, plenty of KC haters figured the mystery of QB Patrick Mahomes had been solved, but they shut up quickly as Kansas City then won eight straight going 12-5 on the season and ending up a field goal short of the Super Bowl. This season Mahomes won’t have his favourite target Tyreek Hill. The speedy Cheetah kept the defenses busy trying to protect him. This is a rare luxury that the QB can afford so the job will go to Mecole Hardman and Marquez Valdes–Scantling. Watch out for Mahomes, Andy Reid, to target Cardinals CB Marco Wilson, who was a poor coverage player last season. Also, keep an eye on Arizona DE J.J. Watt who is a veteran QB-sacker and will face essentially the same O-line that the Chiefs had last season.

Can the Cardinals WR Corps Excel while DeAndre Hopkins sits out? The first thing Arizona’s QB Kyler Murray wants on the field is to show that his offseason allegations about his bad study habits were false. He can do this by being prepared to face the talented Chiefs team before Week 1.

It’s a good thing Murray is mobile, because the scrambling QB has been sacked 106 times in his three NFL seasons, 31 last year alone, so fortunately Murray can also throw well on the run, completing 69.2 percent of his passes in 2021 for 3,787 yards and 24TDs and just 10 INTs.

Murray will not have star receiver DeAndre Hopkins, who was suspended for six games after testing positive for banned substances. He will instead rely on A.J. As they try to beat Chiefs rookie CB Trent McDuffie, Green, Rondale Moore and Marquise brown, the team will be without DeAndre Hopkins.

These two football franchises feature a pair of arguably the top tight ends in pro football, with the Chiefs Travis Kelce able to get open and catch the ball like a receiver while using his size – 6′ 5″ and 250 pounds – and relative speed – he runs a 4. 61 forty-yard dash – to evade tackles.

The notoriously healthy Kelce started all sixteen games last season and caught 92 passes for 1,125 yards and 9 TDs, and that is while serving as part of the offensive line, a role the 3x First Team All-Pro and 7x Pro Bowler takes as seriously as he does his route running and juking.

Expect Cardinals Budda Baker to cover Kelce, or at least try, the 5′ 10″ and 195 pound veteran safety not a physical match for Travis but he has the toughness to stay with the TE, last season posting 3 interceptions and 7 passes defended along with 98 total tackles and 3 QB hits.

Cardinals Key Player (TE) Zach Ertz Arizona’s Zach Ertz is the other star TE in the matchup. He’s in his 10th NFL season, and has the rare skill of mastering both block and catch-catching. This was his first experience at Stanford, and then he played for the Philadelphia Eagles, winning a Super Bowl. Unfortunately Ertz has been listed as in doubt for Week 1. This is due to a calf injury he sustained during preseason. HC Kingsbury says that Ertz will be “coming along”. A loss that is even more concerning is the possibility that WR Hopkins may also miss this matchup.

If he can, Ertz will suit up, a tough veteran who moved over to the Cardinals mid-season last year, still productive despite the new playbook and teammates, posting 56 receptions off 81 targets for 574 yards and 3 TDs for his new team, a production that should evolve in 2022.

Other NFL Games Happening This Week

How to Watch Chiefs vs Cardinals

What Kansas City Chiefs vs Arizona Cardinals Where State Farm Stadium in Glendale, Arizona When Sunday, September 11, 2022; 4: 25 PM ET How to watch CBS