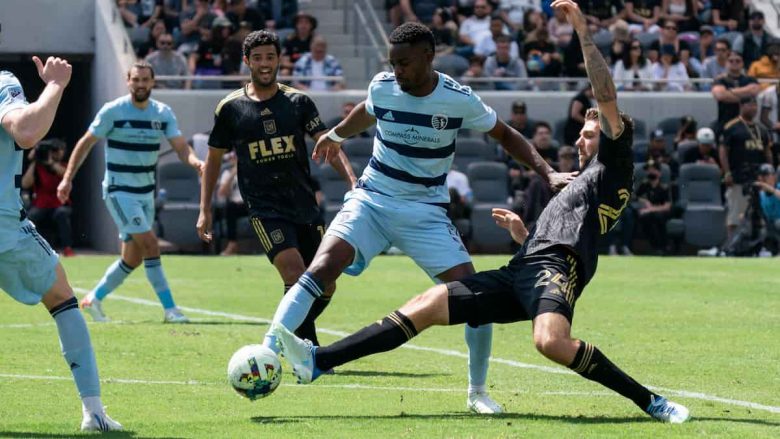 Los Angeles FC have lost twice to LA Galaxy already this season – once in the league and the other time in the US Open Cup. The last time they won in the El Tráfico was back in 2020 during the final stages of the season.

LA Galaxy managed an easy win when the two sides met in the US Open Cup last month. They had 17 shots in total, of which nine were on target, and three found the back of the net. They managed to convert from all the big chances they created but one.

On the other hand, LAFC struggled in the game despite having slightly more possession than their opponents. They had 52 percent of the ball but managed to get just one of their ten shots on target. Ryan Hollingshead scored from a close shot on target, but that came in the 85th minute, and it was too little, too late for them.

Take a look at our guide on how to bet on soccer, here!

La Galaxy Have the Wood Over LAFC

Earlier this season in the league, El Tráfico had a controversial ending. Javier ‘Chicharito’ Hernández and Sega Coulibaly scored early in the game to hand LA Galaxy a 2-0 lead inside the first 30 minutes. The home side looked comfortable and set for an easy win before Cristian Arango scored in the 79th minute to pull LAFC back in the game.

With just one goal separating the two sides and eight minutes added on, the game was still in the balance at the 90-minute mark. Latif Blessing, who came as a substitute in the second half, had the ball in the back of the net in the 99th minute, but VAR ruled it out with a controversial offside call.

Los Angeles FC Are Looking To Bounce Back From Their Loss

Los Angeles FC are on top of the MLS table right now, but are far from their best. They have won three of their last five matches, despite being far from convincing.

Moreover, their form against LA Galaxy will be an issue mentally for the players, as they have not beaten their derby rivals in the last five meetings. The two losses earlier this season, including a 3-1 defeat in the US Open Cup in May, will be at the back of their heads, forcing them to think more.

LAFC made a good start to the season with four wins and a draw in their first five matches. Their unbeaten run came to a halt in the El Trafico in a controversial fashion. They lost 2-1 to the derby rivals but bounced back with a 3-1 win over Sporting Kansas City.

All Good Outside the Derby

They got wins over FC Cincinnati and Minnesota United before drawing to Philadelphia Union. They then suffered back-to-back losses to Colorado Rapids and Austin FC. They got back to winning ways after a 2-0 victory at Columbus Crew.

Following a second loss to LA Galaxy, LAFC needed to set things right when they met San Jose Earthquakes in the next league match. They took a 2-0 lead in the 13th minute, with goals from Cristian Arango and Ryan Hollingshead. It seemed like they were going to get a big win, but Jeremy Ebobisse scored a brace to level things up for the away side at the half-hour mark. Brian Rodriguez scored early in the second half to restore LAFC’s lead and they managed to hold on.

The win was followed by a draw against Seattle Sounders and wins against New York Red Bulls and FC Dallas. They could not keep their five-match unbeaten streak in the league going and suffered a shock loss to Vancouver Whitecaps. Andres Cubas scored the lone goal of the match in the 89th minute after the Canadian side’s defenders kept the league leaders at bay and did not concede even a single shot on target.

Erik Duenas, Julian Gaines, and Tomas Romero are ruled out.

La Galaxy Are Not in Their Prime, but Will Fancy Their Chances Against LAFC

LA Galaxy have not been at their best this season but have managed to bring out their best in the derby matches. They will be looking to make it a hat-trick of wins when they face LAFC this weekend.

They did not have the best of starts to the league this season, but managed to edge out wins in their first two games. Javier ‘Chicharito’ Hernandez scored in the 90th minute to defeat New York City FC on the opening day while Efrain Alvarez scored a screamer to help them beat Charlotte FC in the next gameweek.

Their bright start ran out when they faced the Seattle Sounders, when they ended up losing 3-2. Despite taking the lead in the 6th minute they were 2-1 down at halftime. Douglas Costa got them level quickly after the restart but Xavier Arreaga scored the winner for Seattle in the 72nd minute. They bounced back with a 3-1 win over Portland Timbers and followed it up with a 2-1 derby win over LAFC.

They could not make it a hat-trick of wins as they were held by Chicago Fire to a goalless draw. Their next three matches saw just a goal each, with two wins and a loss. They won against Nashville SC and Austin FC, while losing to Real Salt Lake.

LA Galaxy then went on a poor run, with losses to FC Dallas and Houston Dynamos in their next three matches. Their only point in those games came against Minnesota United in a 1-1 draw. Despite their poor form they managed to beat LAFC in the US Open Cup and then backed it up with a big win over

Austin FC. Once again, they could not maintain their good form and drew against Portland Timbers. They were knocked out of the US Open Cup by USL side Sacramento Republic. Their poor form continued with a league loss to Minnesota United. They were beaten 3-2 with Kevin Cabral and Douglas Costa getting sent off. LA Galaxy managed to collect all three points earlier this week when they faced CF Montreal. They had just 38 percent of the possession but managed to win 4-0 with goals from Javier Hernandez and Dejan Jovelgic in the first half, followed by a brace from Rayan Raveloson in the second half.

Jorge Villafana and Sacha Kljestan are ruled out.

How to Watch Los Angeles FC vs LA Galaxy