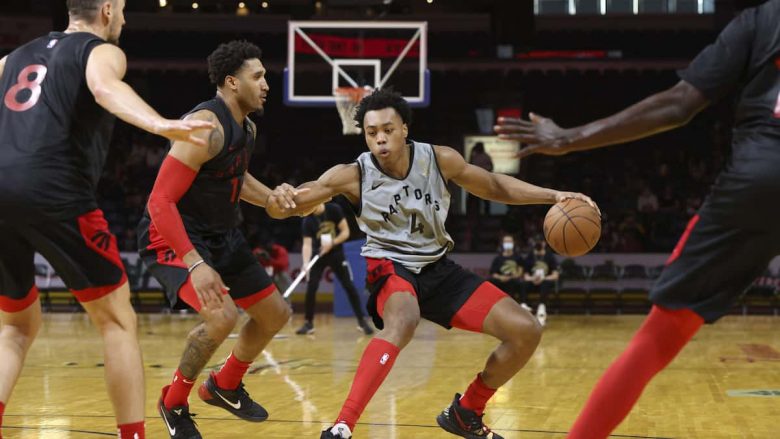 The Los Angeles Lakers are in this match on the second leg of their back-to-back. The Lakers are not without their quality but the Toronto Raptors, a tough-nosed defense team, should be able to manage the Lakers’ pace.

Bet on Raptors vs Lakers Here!

Player Team Date Status Info OG Anunoby Toronto Raptors 3 Mar 2022 Out (Finger) Anunoby is expected to miss at least two weeks before being re-evaluated. Malachi Flynn Toronto Raptors 6 Mar 2022 Out (Hamstring) Flynn is out indefinitely with a hamstring injury. Fred VanVleet Toronto Raptors 13 Mar 2022 Day to Day (Knee) VanVleet was OUT for Toronto’s Saturday (Mar 12) game. Kendrick Nunn Los Angeles Lakers 18 Jan 2022 Out (Knee) Nunn suffered a setback in his recovery and there is no timetable for his return. Anthony Davis Los Angeles Lakers 17 Feb 2022 Out (Foot) Davis will be re-evaluated in 4 weeks.

How can the Raptors beat the Lakers? The Toronto Raptors just won an impressive game against one of the strongest teams in the Western Conference. The Raptors must continue to improve their bench production if they are to extend their winning streak.

The Toronto Raptors are last in the NBA in bench points, scoring an average of just 24.6 points per game from their reserves. However in their most recent win, Toronto’s bench posted 43 points on 17 of 33 shooting.

The Raptors will need to push their pace as they take on a Lakers team in the second leg. Toronto will need to produce from its bench, despite some injuries.

scottie barnes’ energy is without limits, and this raptors team is fun as hell pic.twitter.com/CDlr611PXW

Barnes is coming off of a game where he posted 25 points, 10 assists, 8 rebounds, 2 steals, and a block. He shot 11 of 20 from the field and even hit 2 three-pointers! Barnes’s efficiency and production sealed the victory for Toronto. He also kept Nikola Jokic scoreless during the fourth quarter.

The Raptors hope Barnes will be as influential in the game against the Lakers. Barnes is more an interior threat than a shooter and will have to prove that he can defeat Los Angeles’s presence in order to win the Toronto Cup.

How can the Lakers defeat the Raptors

The Los Angeles Lakers must be cautious when taking on the Raptors. Although Toronto may not have the most talented offensive players, their versatility allows them to create great opportunities. In Toronto’s final game, they excelled in the paint despite being among the smaller league teams. They shot 47.1% from the field on 102 field goal attempts, while outrebounding the Nuggets 50 to 39.

The Lakers are one of the league’s poorest defensive teams, ranking 21st overall in two-point field goal percentage allowed. They must improve their interior defense if they are to defeat the Raptors.

The Los Angeles Lakers will need some strong production from Westbrook if they hope to take down the Toronto Raptors. However, he was not as active in the last matchup.

In his last game, a loss to the Phoenix Suns, Westbrook posted 13 points, 2 rebounds, and 2 assists in 29 minutes of play. Although his scoring was good, he made 4 mistakes to help the team.

With James’ absence, Westbrook must assume a leadership role in the Raptors’ game. Westbrook has the potential to play at the Raptors’ pace, but he will need to make sure his team is competitive.

How to Watch Toronto Raptors vs Los Angeles Lakers