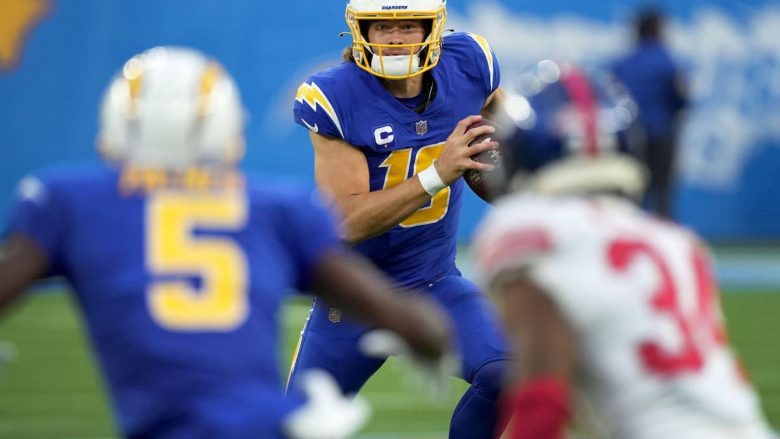 Football gamblers will be happy to know that oddsmakers have already made their best guesses as to which NFL quarterback they think will throw for the most yards during the 2022 regular season, a tough battle to win in this offensive-minded league.

Last year’s winner was the Tampa Bay Bucs GOAT QB Tom Brady, but he has slipped behind this year’s frontrunner, the Los Angeles Chargers QB Justin Herbert, the big-armed hurler who has plenty of the deep threat talent needed to stack the kind of yards this award requires.

Here we go over some of the QBs who are most likely to pass for the most yards this season so you can make a wise early bet on your favorites to win, and don’t forget that the regular NFL 2022 season will start in September and then this bet will be closed to all takers.

Top of this list of potential 2022 Passing Yards Award winners is the Los Angeles Chargers hurler Justin Herbert, a 24-year-old former Oregon state player who became the Rookie of the Year in his first pro season in 2020, now much more acclimated to playing at the big boy level.

When you see who Herbert will be throwing footballs to – WRs Keenan Allen, Mike Williams, Joshua Palmer, TE Gerald Everett, RB Austin Ekeler – it’s no wonder the odds makers have him #1 here, a playmaker who posted 5,000+ yds last year despite missing the playoffs.

Expect Herbert to want revenge in the AFC West as that division continues to improve with better talent all around, and with the game planning of HC Brandon Staley and the genius of OC Joe Lombardi, this Pro Bowl Chargers quarterback could be your best bet here.

A few other NFL QBs have done one thing that Bucs QB Tom Brady has accomplished, which is earn the Most Passing Yards Award four times in his career, though chances are Brady wants at least one more so he can keep chasing Drew Brees’s 7, two old-timers tackling NFL records.

This season could be another great one for Brady now that his other favorite non-Gronk targets WRs Mike Evans and Chris Godwin are fully healthy and his defense is still talented enough to get him back the ball, a balanced team now coached by Todd Bowles whom the players love.

Last season, Brady completed a league-leading 485 passes for a league-leading 43 touchdowns, incredible totals for any player let alone one who is half a decade away from 50, a coach on the field who makes his teammates better and who still wants to win every game.

When you’re one of the best players in the NFL playing on one of the league’s better teams like Patrick Mahomes is with the Kansas City Chiefs, it’s understandable that his 2021 season was considered sub-par by some haters only because of what is now expected of him.

Last season, defenses shut down Mahomes’ deep game and ability to scramble and gambled on his unwillingness to take the easy completions for five yards, a tendency that proved to be true at first and one that Patrick had to fight through and stop trying to win games on his own.

He did that (of course – it’s Mahomes) and led his Chiefs to the AFC Championship game where the Cincinnati Bengals managed to beat them by a field goal in overtime, and now without his Cheetah, Tyreek Hill, to throw balls at, Mahomes might have to reinvent his wheel.

The Los Angeles Rams and QB Mathew Stafford agreed to a four-year contract extension worth $160 million, so now the 13-year NFL veteran leader must earn those big bucks by keeping his team in the Super Bowl hunt despite how hard it is for most teams to repeat as winners.

This season, Stafford has plenty of talented WRs to aim footballs at, including Cooper Kupp, Van Jefferson, Allen Robinson, and TE Tyler Higbee, a group that did well last season, especially when Odell Beckham Jr. came aboard to help with depth during some injuries.

Stafford was stuck on the mediocre Detroit Lions for the first dozen seasons of his NFL career, and he led the Rams to a Super Bowl victory on his first year with the team, so who knows what else this former Georgia playmaker has in store, a 34-year old team leader now in his prime.

One reason Las Vegas Raiders veteran QB Derek Carr should be considered for this bet is wearing #17 and arguably the best WR in the league as well as a former college teammate at Fresno State, a deep threat named Davante Adams who is now sporting the black and silver.

Carr is a 3x Pro Bowl player who at 31-years old is the perfect age to lead from under center, especially now that he has a QB-friendly head coach in Josh McDaniels, the former Patriots Super Bowl-winning OC who is now going to game plan for Carr and his passing offense.

The other not-so-secret weapons at Carr’s passing disposal in 2022 is WR Hunter Renfrow who seems to always be open and able to get yards after the catch, and also TE Darren Waller who has soft hands and the size to make defenders miss their tackles, all ready to catch passes.

Where to Bet on NFL Most Passing Yards

Here are some of the best US sportsbooks to bet on the NFL this season!

In 2021, the NFL’s Most Passing Yards winner was Tampa Bay Buccaneers QB Tom Brady, a GOAT who is most likely not bored with this award yet – he has thrown for the most yards in a season four times now – not a big deal for a 7x Super Bowl Champ and 5x Super Bowl MVP.

Last season, with Brady under center, Tampa Bay went to the second round of the playoffs, first beating the Philadelphia Eagles in the Wildcard Round but then falling to the LA Rams in the Divisional round by a score of 27-30, not bad when you consider the Rams became champs.

It might make sense to bet on old man Brady to take home this award again, the 44 year old unicorn who seems to be capable of playing this boy’s game forever, though this season he will have to create his on-field miracles without his favorite target TE Rob Gronkowski who is retired.

How is the Winner of the Award Decided?

A nationwide panel of fifty members of the AP who cover the NFL on a regular basis selects the winner of the NFL Most Passing Yards award at the end of the season before the playoffs.

The league will announce the winner at the NFL Honors Presentation, which is held the night before the Super Bowl is played.

This season, the presentation will happen on Saturday, February 11, 2023, and as usual, it will not be televised for the public, but chances are the names of the winners will leak out so keep checking back for all the latest news and updates.