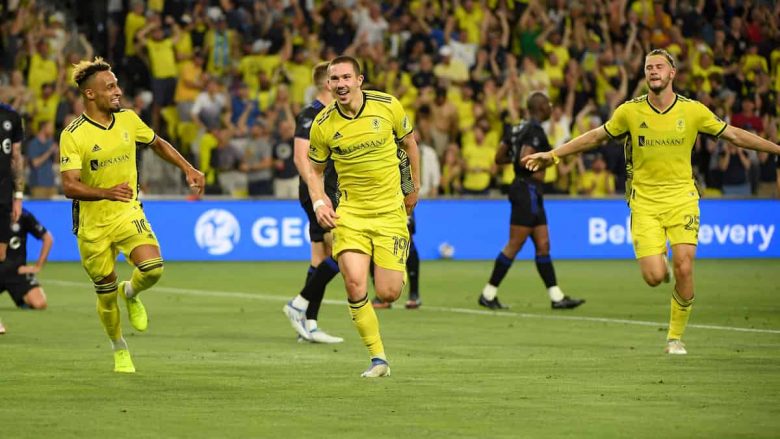 Nashville SC hosts Sporting Kansas City. This is the first ever historic match. Both sides have won one of their previous meetings. The first meeting between these two sides took place in 2020, and Sporting Kansas City managed to win it 2-1 at the Children’s Mercy Park. Walker Zimmerman handed Nashville the lead in the first half, with Gerso Fernandes equalizing in the 53rd minute.

Things got worse for the away side as Alistair Johnston was sent off a minute later, and Nashville was down to 10 men. Erik Hurtado managed to make the most of the extra man on the pitch and got the winner for Sporting in the 79th minute. The match ended 2-1, with the home side dominating 60% of the ball and taking 16 shots.

The next meeting was earlier in the season and Nashville emerged victorious. Hany Mukhtar missed a penalty for the away side in the 14th minute, and they were made to pay by Sporting’s Remi Walter. He scored the opening goal of the match 10 minutes later, and the home side took the lead to halftime.

Nashville came out hungry in the second period and scored the equalizer quickly. Dave Romney scored in the 51st minute, with Charles Sapong making it 2-1 to the away side in the 68th minute. The team managed to keep the lead, and they won all three points.

Nashville is in great form, with only one loss from 9 matches across all competitions. They are sitting 10th in the league table with six wins, and five draws from their opening 15 games this season.

Nashville did not play in both of their pre-season matches and didn’t win either. Fans wondered if they were ready to play in the regular season. They lost to FC Cincinnati in friendlies and drew with Philadelphia Union.

Early Struggles The doubts were justified after Nashville’s struggles in the first nine matches. As Gary Smith’s team struggled to score in the front, but performed well from the back, all games ended by one goal. The advantage of these matches is that they were all played away from their home, as GEODIS Park was not ready for hosting them.

The season’s opener was played in Seattle Sounders. They managed a win of 1-0. Anibal Godoy got on the scoresheet in the 80th minute, which turned out to be the lone goal of the match. They drew with Minnesota United in the next match before losing to FC Dallas and Real Salt Lake.

Coming Back Up Smith’s players tried to rebound and beat Columbus Crew twice in consecutive matches. However, they could not keep up the winning streak for too long. Just before the start of their season’s first home match, they lost to LA Galaxy and San Jose Earthquakes.

They hosted Philadelphia Union, but were unable to win the match. Mikael Uhre scored for the away side in the 66th minute after a goalless first half, and Nashville needed a late goal via Randall Leal’s penalty to get a point from the game.

Unbeaten Run Since then, Nashville has played five matches at their home in all competitions, winning three of them and drawing two. They beat CF Montreal and Real Salt Lake in the league. Atlanta United won the US Open Cup 3-2. They were held in San Jose Earthquakes’ last week game and also lost to Atlanta United in their league home. Smith’s team will expect another victory this weekend as Houston Dynamo is the only opponent they have beaten in 9 matches.

Injuries and Suspensions Randall Leal and Teal Bunbury are out.

Sporting Kansas City has had one of their worst seasons. They are second from the bottom right now with three wins from their 16 matches, averaging less than a goal per game while conceding almost twice as many.

Pre-season was a disaster. They lost to Phoenix Rising FC, Portland Timbers and Colorado Rapids. Peter Joseph Vermes had to amend his plans after they lost their match against El Paso Locomotive FC was postponed. Sporting had a disappointing pre-season and was not expecting much once the MLS season began. But that’s exactly how it turned out.

They lost their season opener to Atlanta United 3-0, but bounced back to win the second half 1-0 over Houston Dynamo. The fans were expecting a long streak of losing without a win, with back-to-back losses to Colorado Rapids (and Chicago Fire) following. They were pleasantly surprised when the team won 1-0 over Real Salt Lake the following week. Vermes’s team won the game, but they needed Johnny Russell’s late goal to win all three points. Although they won the game, their confidence was lacking in the three subsequent games.

Los Angeles FC, Nashville SC and Vancouver Whitecaps were all beaten, but the manager was under pressure again. With draws against Columbus Crew and FC Dallas as well as New York City FC, he helped to steady the ship. The Timbers defeated FC Dallas at the US Open Cup one week later, but they were trounced by Portland Timber that same week. They were beaten 7-2 by the Timbers at Providence Park, to take them back two steps.

Sporting beat Colorado Rapids in their next match. Four players were sent home. After a fight broke out among the players, Auston Trusty and Lucas Esteves were sent off.

Sporting was unable to win the victory at San Jose Earthquakes, as two of their players were suspended. They were held to an 1-1 draw. They are now just two points behind the Chicago Fire, who have lost to New England Revolution and Vancouver Whitecaps. The good news is they still have a shot at the US Open Cup, despite their below-par season. They beat FC Dallas and were able to defeat Houston Dynamo in round 2.

Injuries and Suspensions Gadi Kinda, Ozzie Cisneros, and Alan Pulido are out.

How to Watch Nashville SC vs Sporting Kansas City