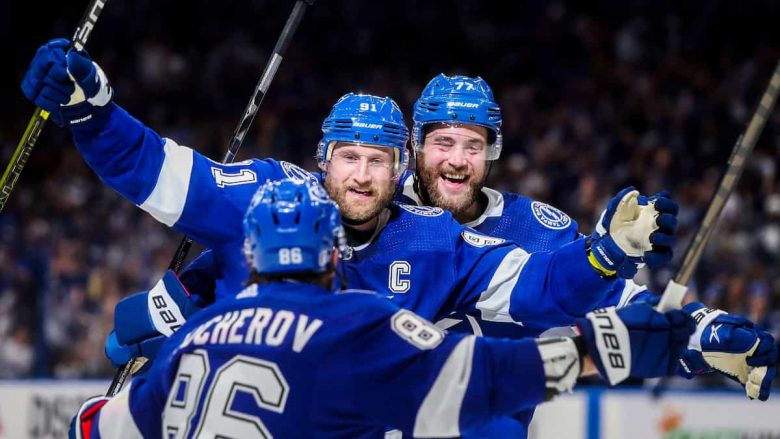 The Rangers’ Playoff success is not due to one player, but to a few players. These players include Artemi Panarin, Adam Fox and Chris Kreider. Mika Zibanejad has been a scoring machine and has 24 points in 17 games; ten of those 24 points have come from goals. Adam Fox is only one point behind Zibanejad, but almost 80% of his points have come on assists. Fox has 18 assists in 17 games and plays over 26 minutes a game. Fox is frequently seen on the ice alongside Chris Kreider. Kreider is scoring on over 22% of his shots and has contributed ten of New York’s 59 goal Playoff goals. Artemi Panarin is our final player. Panarin is playing over 20 minutes a game and has thrown in five goals and ten assists in that time. Although his passing is efficient, his shooting needs to be improved. He is only scoring on 11.6% of his shots.

Goaltender Igor Shesterkin was awarded the Nod in nearly all Rangers’ Playoff Battles. Shesterkin’s save percentage is. 930 and is only giving up 2. 62 goals per game.

The Tampa Bay Lightning have made another strong Playoff run in the last five seasons. Once again, their veteran presence proved to be an asset.

On paper, the Lightning seem less skilled than the Rangers. The Lightning are more experienced and possess a lower offense. This does not make a difference in the Playoffs. The Playoffs are built on Tampa Bay’s past experience and they will continue to grow. Victor Hedman and Steven Stamkos, veterans of the Lightning Playoffs, have assumed leadership and achieved positive results. This Lightning Playoff run has been made possible by

Goaltender Andrei Vasilevskiy. He has only given up 2. 54 goals per game and has a save percentage of .922. The Lightning is playing at home after a win in Game Three. They will be winning Game Four.

The New York Rangers will be on the road as the underdogs. The Rangers must win the First Period, and score power-play goals to reverse that trend.

New York were held scoreless during the first period of Game Three. Although this was not their main problem, it didn’t help. Rangers must lead the way when entering the locker room at the beginning of intermission. They will only shut down the home crowd if they do that.

The Rangers are currently converting nearly 1/3 of their power-plays, averaging 3 per game. Because they have the man advantage, they must keep drawing penalties.

The Lightning are expected to win, but only if Mika Zibanejad is stopped and they score their first goal.

The Lightning are riding high after their Game Three win. The Lightning need to continue that momentum by scoring the first goal. They will win the series.

Mika Zibanejad was a force in this series. He creates opportunities for his teammates even when he’s not scoring. This game will be a challenge for the Lightning’s defenseman.

Everyone knows Adam Fox is able to pass. But the true challenge lies in defense. The 24-year-old from Jericho, New York, is the Ranger’s top defenseman and will need to lead New York’s defense against this tough Lightning offense.

Ondrej Palat should be at the top of his game. The veteran winger scored the game-winning goal in Game Three with 42 seconds left. This goal changed the tide in Tampa Bay’s favor.

Palat must be aggressive and ready to score. The Rangers won’t pay too much attention to him because he isn’t the Lightnings best offensive player.