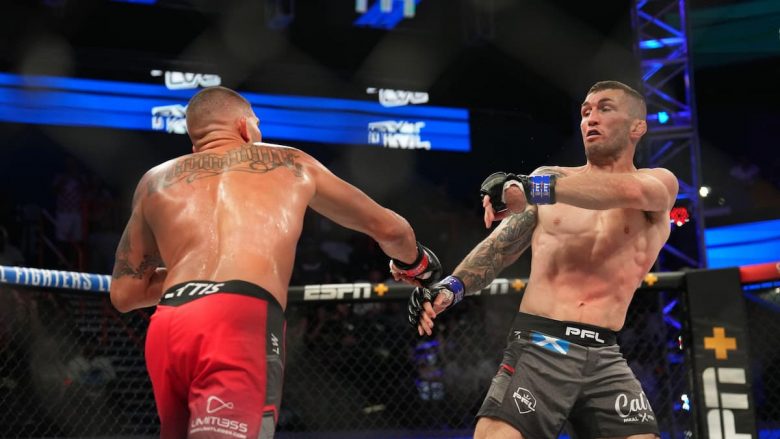 In a rematch set to take place just two months after the original fight, Anthony “Showtime” Pettis will once again face Stevie “Braveheart” Ray in the PFL 7 main event. It was an even fight in the first round. Neither Pettis or Ray had a clear advantage in terms of their feet and grappling, but the pace picked up in round 2.

About a minute into round two, Pettis switched to a defensive strategy while Stevie Ray began to put pressure on his opponent by using constant strikes.

Two minutes in, Pettis tried to take down Ray in an attempt to alter levels. Ray repelled him and took his opponents back during the scramble.

After some ground and pound, Steveie Ray got Pettis into a modified twister submission to win the fight, a move he had used recently to win a grappling bout at Polaris 18.

After a slow start to the fight, Pettis seemed less motivated and could not escape Stevie Ray’s gripping holds. With so little time between last fight and the current one, the result is unlikely to be different.

Stevie Ray to win by submission in round two

Omari Akhmedov had a long and illustrious career at the UFC, going 9-5-1 with the promotion before joining the PFL. His first PFL fight was a disappointment. He lost to Jordan Young in Round 3.

Since his initial defeat, Akhmedov is now on a winning streak of two fights against Viktor Pesta. He won round one with an overhand rightKO and Teodoras Aukstuolis by second round arm triangle choke submission.

Josh Silveira, an undefeated powerhouse has won thirteen of his 13 fight wins in both amateur and professional MMA.

He is a veteran of the PFL with two wins and looks to improve his record by adding another win against Akhmedov.

Akhmedov, a slow starter, prefers to feel the ropes before looking for a finishing move. Silveira throws heavy strikes right from the start. Expect Silveira’s game plan to win this bout due to Akhmedov’s exceptional grappling skills.

Josh Silveira by KO/TKO/DQ in round one

“The Canadian Gangster” enters this bout as a big betting favourite and with good reason too as he is currently riding a four fight winning streak which he intends to extend to five in a row. Aubin-Mercier lost three consecutive fights in UFC to Alexander Hernandez and Gilbert Burns. He was then cut from promotion. Aubin-Mercier joined the PFL, where he found his form again. He defeated Marcin Held and Darrell Horcher and Natan Shulte, and seemed unstoppable in this stage of his career.

Alex Martinez won the region’s first match against Loik Radzhabov via split decision. He then lost his second fight to Natan Schulte by split decision in the PFL.

Martinez would lose his next match against Loik Radzhabov, who beat the Paraguayan fighter unanimously.

Alex Martinez came back for the 2022 season hungry for wins and once again found his form when he defeated PFL: 7 headliner Stevie Ray by unanimous decision before securing a split decision victory in the following match. Olivier Aubin—Mercier is a veteran fighter who has faced tougher opponents than Alex Martinez throughout his career. He should be able to lead the Canadian Gangster all the way to a fifth straight victory.

We have an absolute barn burner on our hands in the opening fight of the PFL: 7 main card between two notorious fight finishing light heavyweights.

Rob Wilkinson is an Australian former UFC fighter and former kickboxer who joined the PFL for the 2022 season and has put together two consecutive knockout finishes over Bruce Souto in round two and Viktor Pesta in the first round.

Wilkinson was Israel Adesanya’s first opponent in the UFC. He reached the second round and was stopped by UFC champion, UFC Middleweight Champion.

Delan Monte also joined the PFL for the 2022 season and while he lost his debut to Antonio Carlos Junior via D’Arce choke in the first round, he went on to defeat Emiliano Sordi with a devastating first round KO.

We are going to be with “Razor”, Rob Wilkinson, in this fight due to the difference in his experience and Rob Wilkinson.

Rob Wilkinson to win by KO/TKO/DQ in round two