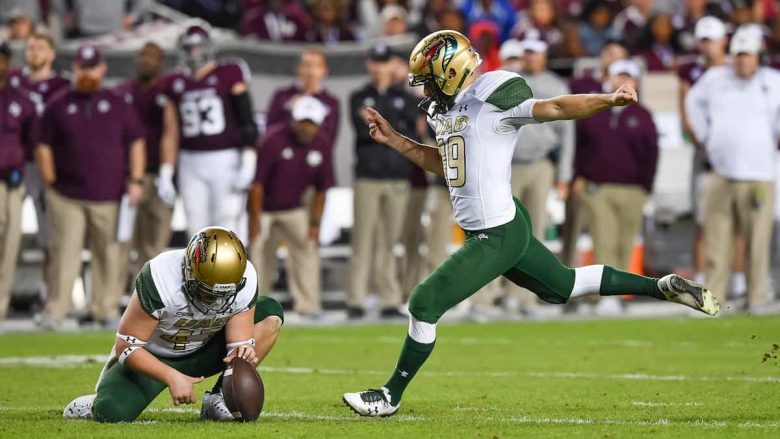 *) , , , . The fourth and final USFL week 5 matchup features the winnerless Pittsburgh Maulers (North) taking on the Houston Gamblers (South), a rare win for either of these two losing teams.

The Maulers defense has kept them in games, but it’s Pittsburgh’s lack of offense that has them winless, with HC Kirby Wilson’s team scoring less than ten points per game while allowing opposing teams to put an average of 23 points on the scoreboard each time, a recipe for losing.

For the Gamblers, their struggles on defense have kept them at 1-3, with Houston allowing its opponents to gain 256 passing yards and 154 rushing yards per game, not good when HC Kevin Sumlin’s Gamblers offense is averaging less than 250 yards of total offense each time.

Can the Maulers get on the scoreboard more often?

The Pittsburgh Maulers offense is struggling to find its identity, a rush-heavy beginning turning into a late start to the passing game, and now the ‘new’ starter under center is QB Kyle Lauletta, a 27-year old former NFL fourth round draft pick (NY Giants, 2018) who is off to a shaky start.

Last week against the New Jersey Generals, HC Kirby Wilson gave Lauletta his first starting nod of the season, and Kyle struggled to complete even 47% of his passes, going 15/32 in that loss for 169 yards and no touchdowns or interceptions, a soft start that can only get better.

Pittsburghh’s quarterbacks coach John Tomlinson is expected to be working with Lauletta in practice all week to get him comfortable in the pocket as well as to build a relationship with Tre Walker and Bailey Gaither (see below).

Can the Gamblers defense stop the Maulers pass attack?

The Gamblers won in Week 1 and have lost three games since, allowing opponents to score 83 points in that trio of losses compared with the 70 points Houston’s offense generated, a problem that defensive coordinator Tim Lewis will most likely be addressing for the rest of the season.

Houston’s defense has struggled against both the pass and then run this season, so far in four games allowing opponents to throw for 257 yards and run for 154 yards per game, production that has resulted in almost 24 points scored against them every time they take the field.

That puts too much pressure on Houston’s offense who average 22 points per game, a fact head coach Kevin Sumlin no doubt understands, and now against this Maulers’ flaccid pass attack it could be the perfect time to practice whatever defensive upgrades they have installed.

Fans of the San Jose State Spartans no doubt remember wide receiver Tre Walker, one of the top-10 pass catchers in that school’s history, a four year player who caught 189 passes for 2790 yards and 12 touchdowns during his time there who is now suiting up for the Pittsburgh Maulers.

In the three USFL games Walker has played for the Maulers this season, he has been targeted 30 times and has caught 17 of those passes for 195 yards but no touchdowns, his longest catch a 32-yarder, proof that he can get open and then earn yardage after the reception is made.

Another key WR in the Maulers’ passing attack is Bailey Gaither, another San Jose State product who has been targeted by Pittsburgh QBs 16 times and has caught ten of those passes for 159 yards and a touchdown, a sure-handed counterpart to Walker who can usually get open.

Special teams are a problem for many of the USFL’s eight teams this season. The Michigan Panthers don’t have an official placekicker, but Nick Vogel is a UAB alum with a sweet kick foot.

In four games, the 26-year-old Vogel has scored 31 points via his kicks – tied for most in the league with the Birmingham Stallions’ placekicker Brandon Aubrey – a feat made possible through Nick’s 9 made field goals out of ten and his four out of six made extra point attempts.

Last week in the Gamblers’ loss to the New Orleans Breakers, Vogel was perfect, making three-for-three field goals – his longest was a 53 yarder – and he converted the one extra point he was asked to kick, production that has Nick as a much needed sure thing for Houston.

How to Watch Maulers vs Gamblers

Maulers vs Gamblers Information What Pittsburgh Maulers vs Houston Gamblers Breakers Where Protective Stadium in Birmingham, Alabama When Sunday, May 15, 2022; 4: 00 PM ET How to watch FOX