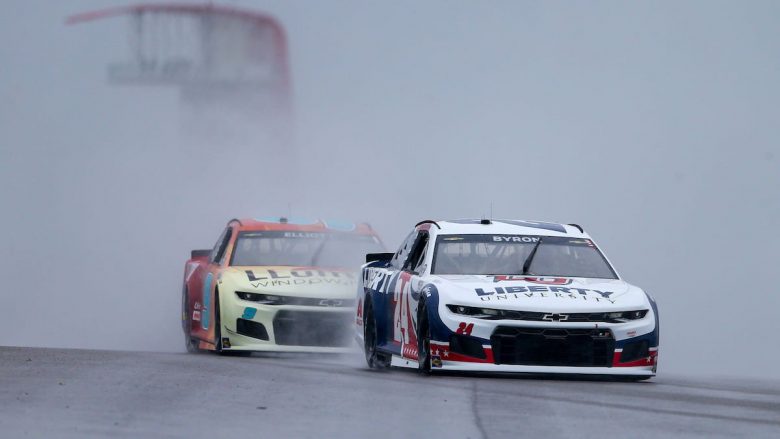 *) . , . . During the NASCAR weekend last year at Circuit of the Americas it rained so much that the team built an ark inside the field. Ok, maybe that’s a little exaggerated, but rain and standing water reduced visibility and slowing down racing speeds.

Chase Elliott won this race. This was an extension of his road course successes. But, the conditions in Austin, Texas will be very different.

New Car could be a boon for Pole winner Ryan Blaney After examining the adjusted post-qualifying odds, it is clear that the handicappers did not actually watch the laps.

Here’s the problem: Neither Elliott nor Larson made the final 10 in qualifying. Elliott will start 12th on Sunday, one position better than Larson.

Despite being pushed into “soft” walls during practice, Ryan Blaney took pole on Saturday. He is also driving an excellent car and has shown great speed. Though Blaney has endured a star-crossed season this far, and though he doesn’t consider himself an elite road racer, he’s a much more attractive pick at +1200–and at +250 to finish in the top three (both via DraftKings).

You can forget about the previous road course success stories of Elliott or Larson. However, NASCAR’s latest race car has made the sport more competitive. Next-Gen cars have attributes that aren’t in last year’s car–rack-and-pinion steering and a five-speed sequential transmission. Independent rear suspension. A larger brake package. Therefore, we don’t think Elliott or Larson will be moving to the front. We’re choosing Blaney, given the option.

Kyle Busch Looks to COTA for Turning Point in 2022 Season

Kyle Busch at +1400 on a road course seems like a gift, but that’s where DraftKings has him after qualifying for Sunday’s NASCAR Cup Series race.

It’s true that Busch didn’t have a great performance in time trials and will start 15th on Sunday. Busch’s season has not been great. He’s lost five races, and he crashed out at the Atlanta Cup race his last start.

But Busch ran fastest during Cup practice Saturday and will be able to pace through the field Sunday. Busch was the leader of Saturday’s NASCAR Truck Series Race at COTA when he was pushed aside by a three-wide group in overtime. The extra laps should prove to be an advantage.

Despite his consistent speed, Daniel Suarez is getting no respect

You’d expect that if your NASCAR Cup practice time was second and you backed it with qualifying second, the oddsmakers would notice.

You’d be wrong. Daniel Suarez did exactly that and was available at +2500 when odds were posted after time trials. Subsequently, action on the Mexican driver moved the line to +1600, but he’s still a good bet at that price.

Suarez drives for TrackHouse Racing. This joint venture is between Justin Marks, Pitbull and Pitbull. In five races this season, Suarez has two top-five results–fourths at Fontana and Atlanta–double the number he posted in 36 events last year.

The driver of No. 16 Kaulig Racing Chevrolet blew his lap in the first round of qualifying and will start 20th, but you can count on Allmendinger to make swift progress toward the front of the field. We are betting on Dinger all over the field.