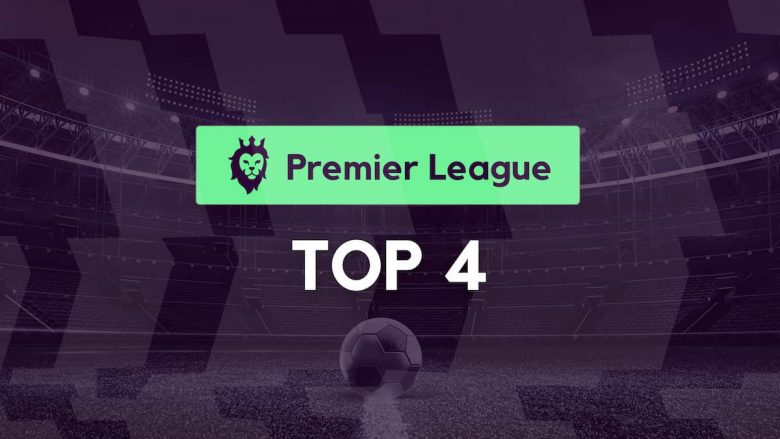 Manchester City are the favorites to win the Premier League title, followed by Liverpool, Tottenham, and Chelsea. To read more about the runners and riders in the title race, check out our article on that very topic.

What Happens to the Top Four Teams in the Premier League?

In previous seasons, the top three teams automatically reached the group stage of the Champions League, and the fourth-place finisher entered the qualifying phase. That changed at the start of the 2017/18 campaign when UEFA handed more automatic qualification spots to Europe’s biggest leagues, including England’s top flight.

Which Clubs Have the Most Finishes In the Premier League Top Four?

Club Number of Finishes Manchester United 25 Arsenal 21 Chelsea 19 Liverpool 19 Manchester City 12 Tottenham Hotspur 7 Newcastle United 5 Blackburn Rovers 3 Leeds United 3 Aston Villa 2 Manchester United did not finish in the top four last season, but they remain the most successful side in Premier League history in that regard. Arsenal are second but are in danger of being caught by Chelsea and/or Tottenham in the next couple of years.

Manchester City are still relatively low down this list due to the fact that their first Premier League top-four finish came in 2010/11. They will probably continue to close the gap on the teams above them in the next few seasons.

Who Are the Top Four in the Premier League?

The ‘top four’, more commonly known as the ‘big four’, was a phrase often used in the 2000s to describe the Premier League’s strongest quartet: Manchester United, Arsenal, Chelsea and Liverpool.

Between 2003/04 and 2008/09 inclusive, 23 out of 24 top-four places went to these sides, with Everton the only other team to break into the Champions League places in 2004/05. That came at the expense of Liverpool, who finished fifth.

In recent years it has become more common to refer to the Premier League’s ‘big six’. Manchester City joined the elite from around 2010/11, when they secured their first top-four finish.

Tottenham made it a sextet when they finished fourth or above in four consecutive seasons between 2015/16 and 2018/19.

Was the Premier League Top Four Always a Goal for Clubs?

It is only in the last 20 years that Premier League clubs have actively targeted a top-four finish. Even a decade ago Arsene Wenger, the long-serving Arsenal manager, was criticized in some quarters for prioritizing a top-four place over trophies like the FA Cup and the League Cup.

In the Premier League’s debut campaign in 1992/93, Manchester United won the title and were the only club in the division to qualify for the Champions League.

Second place only offered a pathway to Europe’s elite competition in 1996/97, and the top three qualified for the tournament in 1998/99. The 2001/02 season was the first in which each of the top four finishers secured a spot in the Champions League.

It was around that time that fans and pundits began to talk up the race to qualify for the top four. The Champions League has continued to grow in stature since then, and players, managers and chairmen no longer feel any sense of embarrassment to admit that they are targeting the top four.

How can I watch the Premier League on TV?

Soccer fans based in the United States can watch the Premier League on NBC, Peacock Premium, and fuboTV. Kick-off times usually range from 7.30 AM to 3.00 PM (EDT).