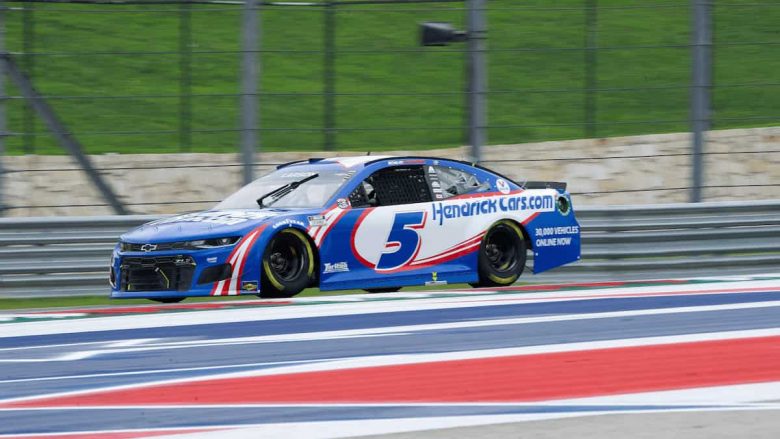 A quick glance at the DraftKings Sportsbook odds for Sunday’s Quaker State 400 at Atlanta Motor Speedway will tell you that the handicappers have no idea who will win the 19th NASCAR Cup Series event of the season.

Ryan Blaney, Chase Elliott, and Ross Chastain are co-favorites at +1000. Defending race winner William Byron is part of a large group at +1200.

Atlanta was repaved for the 2022 season, and NASCAR adopted its superspeedway competition package—the same in use at Daytona and Talladega—for the 1.5-mile intermediate track, guaranteeing close-quarters pack racing.

Pack racing in the draft expands the number of possible winners, but we think Byron, who has fallen on hard times lately, will win for a second time at Atlanta and become the first driver to win three Cup races this season.

We advised betting on Kurt Busch to finish in the top three and top five at World Wide Technology Raceway in early June. He ran third, and we cashed both bets.

Two weeks later, we picked Busch for the same two bets, and the 2004 NASCAR Cup Series champion pulled off a runner-up finish at Nashville Superspeedway, winning both once again.

It should come as no surprise that we’re back for more this week. Busch is a veteran driver who knows how to negotiate the draft, and he’s available at long odds.

With Playoffs Looming, Ryan Blaney Could Use a Win to Solidify His Spot

The first 18 races of the NASCAR Cup season have produced 13 different winners. The regular season ends after 26 races, and the surest way to secure a spot in the 10-race Playoff is to win a race.

That’s something Ryan Blaney hasn’t done this season. Because of his consistency, Blaney is second to Chase Elliott in the series standings and likely to earn a Playoff spot on points—if there are fewer than 16 different winners after 26 races.

A win, however, would seal the deal. The problem is that, after winning three times last year, Blaney hasn’t shown the ability to close out a race in 2022.

Though he’s one of the betting favorites at +1000, we advise steering clear of Blaney until he proves himself.

How to Watch the Quaker State 400