Rams Vs Cardinals Week 3. Can Kyler Murray Continue To Escape The Tacklers? 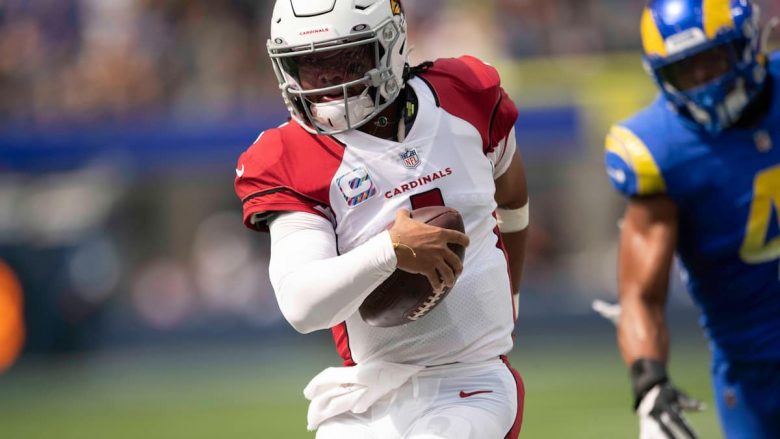 *) , , (* All four teams in the NFC West currently are 1-1 so this divisional battle becomes crucial for both these teams. The defending champion Los Angeles Rams will be facing off against the Arizona Cardinals. Both QBs have cannon arms, and plenty of targets to cause serious injury.

The LA Rams are lucky they’re not 0-2 as their Week 2 win happened as they were up 31-17 with 5 minutes to go against the Atlanta Falcons but a blocked punt for a TD and a WR Cooper Kupp fumble put their win in jeopardy until a Jalen Ramsey goal line interception sealed the win.

The Arizona Cardinals were shut out in the first half by the Raiders last week, but then QB Kyler Murray shifted into video game mode and used his unique scrambling skills and rocket arm to tie up and eventually win the game, their struggling defense ranked 28th in the league right now.

Check out our NFL Weekly Picks against the Spread!

Can Rams’ WR Cooper Kupp recover from his Week 2 Fumble

Last season’s NFL Offensive Player of the Year was LA Rams WR Cooper Kupp who led the league in four categories – 145 recs, 1,947 rec yds, 16 rec TDs, 114.5 rec yds per game – and who is already leading the NFL this season with the most receptions (24) among his peers. But Kupp did something that he doesn’t often do: he fumbled during the crucial moment in the game. This allowed the Falcons to win the game. However, Jalen Ramsey’s goal line pick was enough to save the day.

Kupp must be mentally sound – he has come back from a torn ACL in 2018 – so hopefully, his inconvenient fumble won’t rattle his brain because in Week 3 against these Cardinals it will most likely be Cooper that QB Matthew Stafford will be depending on to help seal a divisional win.

Can the Cardinals’ QB Kyler Murray continue to evade tacklers?

The Arizona Cardinals drafted QB Kyler Murray knowing that not only does he have a huge arm but also because of his ability to scramble out of trouble and for first downs, so far in 2022 with 5 carries in each of the two games for 57 yards and a TD averaging 5.7 yards per carry.

In 2022, the Cardinals offense has been middle-of-the-road, ranked 16th after two games, with the team’s rushing attack (ranked 11th) more productive than Murray’s passing offense (16th) with Arizona so far averaging almost 350 yards of total offense and 25 points per game.

Expect the Rams’ to try to limit Murray in the pocket. With DE A’Shawn Robinson (below), and their rushing attack (ranked th) more productive than Murray’s passing offense, Arizona has been averaging almost yards of total offense and points per game.

Many an NFL expert would argue that Los Angeles Rams DT Aaron Donald is the best player in the league right now, the 6′ 1″ 280 pound sack specialist difficult if not impossible to block one-on-one who has been named the league’s Defensive Player of the Year twice in his career. This season is Donald’s ninth with the NFL. He has posted 9 tackles, 2 QB hits and 4 tackles, one for a loss, and an errant sack. But it’s his ability to instill fear in opposing players that makes him the most valuable.

A future Hall of Fame player and Super Bowl Champ, Donald’s career numbers speak for themselves so far with 99 sacks, 228 QB hits, 445 tackles, 23 forced fumbles, 7 fumble recoveries, and 23 passes defended, so keep an eye on #99 during this key Week 3 game.

The Cardinals defense is not the same without veteran DE J.J. Watt on the field, the 3x NFL Defensive Player of the Year out in Week 1 for the team’s 22-44 loss to the Chiefs after not practicing all that week due to a calf injury, now healthy and back in Arizona’s starting lineup.

In Week 2, Watt was back on the field and posted solid numbers, including a sack and a QB hit. He also had 2 tackles for a loss. This proves how important Watt is to Cardinals’ defensive plan.

This is Watt’s second season with Arizona, the bulk of his 12-year NFL career having been spent playing for the Houston Texans, a 5x First-team All Pro and 2x NFL Sacks leader who will be trouble for whatever Rams defenders are assigned to double and triple-team him in Week 3.

How to Watch Rams vs Cardinals

What Los Angeles Rams vs Arizona Cardinals Where State Farm Stadium in Glendale, Arizona When Sunday, September 25, 2022; 4: 25 PM ET How to watch FOX