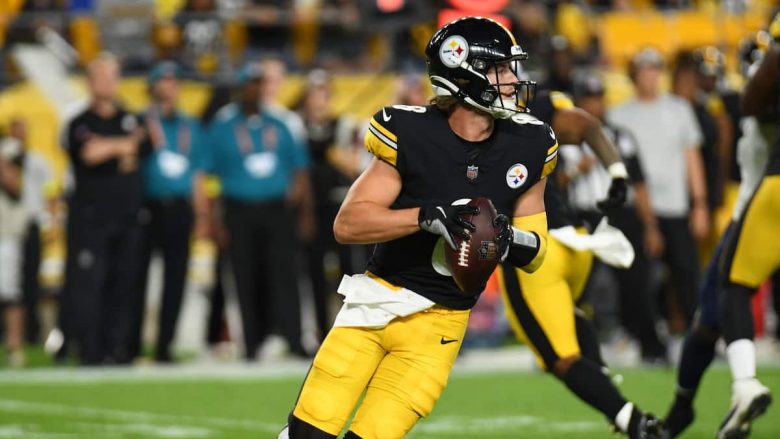 *) . . . . . . . The Steelers will have an exciting season in . HC Mike Tomlin has two options for replacing retired QB Ben Roethlisberger. Mitch Trubisky is a veteran and Kenney Pickett is a rookie.

The Steelers posted a 9-7 record last season and earned themselves a Wild Card playoff berth, but their postseason run was cut short and hard by the KC Chiefs who almost doubled their score, 21-42, a loss that no doubt left a bitter taste in that collective franchise’s football mouth. This should be a thrilling season for this historical football team with many chances to win some wagers. Let’s look at the top sportsbook promo codes and picks for the 2022 seasons.

Sign up to Caesars Sportsbook with our promo code ‘WSNFULL’, place your first bet and get up to $1,2500.

Oh, how the mighty have fallen, these 2022 Pittsburgh Steelers with their winning HC Mike Tomlin now wondering who he will start under center, although it looks as though it’s veteran Mitchell Trubisky until he messes up and fans start screaming for rookie backup Kenny Pickett.

This bet has gamblers guessing if the Steelers will end the season with under eight wins for the first time since 2003 when Bill Cowher was the HC, Charlie Batch the QB, and the team went 6-10 after not winning consecutive games the entire year finishing third place in the AFC North.

For this futures bet, a 7-10 record or worse wins the under and an 8-9 or better wins the over, but true fans of the Pittsburgh Steelers should remember that betting the under might force you to route against your team so keep that in mind as you break open your fat betting kitty.

FanDuel Welcome Bonus Bet $5 and Get $150 in Free Bets

The range of betting available at FanDuel is massive and easy to understand. Sign up, bet $5 and get $150 in free bets!

Pittsburgh Steelers to Make the Playoffs (+350)

With Mike Tomlin as the Steelers’ HC it is a safe bet that they will make the playoffs since they have in ten of his fifteen seasons at the franchise helm, playing January ball in six of the eight previous season losing in the playoff Wild Card round in the last two brief postseason runs.

The Steelers belong to the AFC North. This division is the third most difficult in the NFL. Therefore, winning within this division might prove challenging this year. Last year, they went 4-2 against the Browns, Bengals and Ravens. The Steelers can make it to the playoffs in one of two ways. They must win the AFC North which is a tough division with all of their talent. Or they have to become one of seven AFC franchises by the end of this season to be eligible for a Wildcard berth.

DraftKings Sportsbook offers a wide range of NFL bets. Sign up and get up to $1,000 deposit bonus!

For the Steelers to have any chance in 2022, they must solve their QB problem and settle on a starter (Mitch Trubisky vs rookie Kenny Pickett) so that whoever ends up under center can develop a connection with star rookie WR George Pickens, the former GA Bulldog standout.

In three years playing SEC ball, Pickens posted 90 catches for 1,347 yards and 14 TDs, numbers that attracted the Steelers front office enough to invest their 2nd round pick (52nd overall) on him in the NFL Draft, and now he is expected to start alongside Diontae Johnson.

Pickens runs the 40-yard dash in 4. 47 seconds so he has the speed to give NFL cornerbacks a run for their money, but the bet here is whether he will outperform fellow rookie receivers like the Chiefs’ Skyy Moore, the Saints’ Chris Olave, the Titans’ Treylon Burkes, and others.

What a fun and easy bet this is for Steelers fans who get to watch DE T.J. Watt play every week, the energetic and rough tackling quarterback hunter who is about to start his sixth NFL season, a pro sacker with 72 career QB takedowns and counting also with 150 hits on the QB.

Watt was the winner of this title last season when in 2021 he posted a whopping 22.5 total sacks tying the NFL record set by New York Giants LB Michael Strahan who sacked that same number of QBs in the 2001 season, and now Watt will do his best to break that record outright. This makes the bet nearly certain, with the exception that a few high-lever playmaking defenders such as the Los Angeles Rams Aaron Donald and Myles Garrett (both QB takedown specialists) will also compete.