The Fierce Battle Between Elliott And Reddick At The Glen 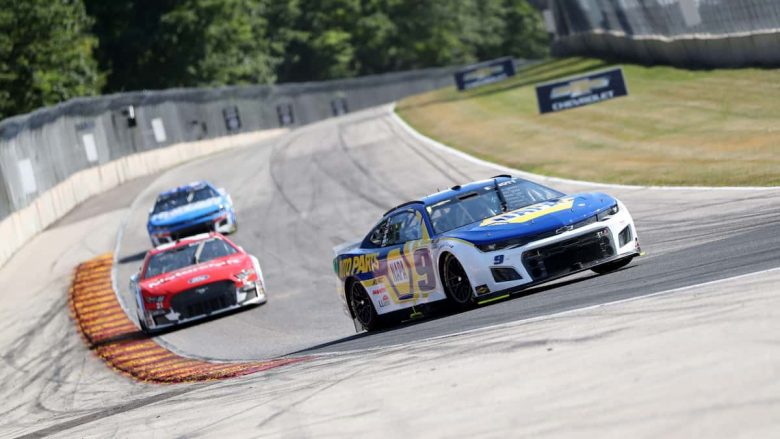 Go bowling at The Glen Predictions

Chase Elliott or Tyler Reddick: Who is the real Road Course King?

Before the 2022 season and the introduction of the new Next Gen race car into the NASCAR Cup Series, Chase Elliott was the unrivaled King of the Road Courses.

This season Elliott has lost four of his road course starts. Ross Chastain won the thriller at Circuit of the Americas. Daniel Suarez was victorious at Sonoma. Tyler Reddick received checkered flags at Road America, and the Indianapolis Grand Prix Course.

Like Elliott, all are Chevrolet drivers. Elliott has been content with just four wins on conventional tracks.

Seven of Elliott’s 17 career victories have come on road courses–two at Watkins Glen–and we don’t think he’ll be shut out on those circuits this year.

That’s why we’re backing the 2020 series champion to win the Go Bowling at the Glen at +500 via DraftKings. Reddick (+600) may be the King for now, but he’ll be dethroned by Sunday night.

HTML4_ With two races remaining in the NASCAR Cup Series regular-season season, Martin Truex Jr. is and Ryan Blaney will be competing for the last postseason Playoff slot.

Entering Sunday’s race at Watkins Glen, Blaney leads Truex for the 16th Playoff berth by 26 points. The 15 drivers ahead of Blaney in the Playoff standings all have won at least one race. Blaney is winless, Truex is not.

Given his record at Watkins Glen–a victory and seven top fives in 15 starts–you might expect Truex to have an edge on Sunday. Truex and all the Toyota drivers have struggled to complete the Next Gen road course.

Both Truex and Blaney are offered at long odds via DraftKings Sportsbook, +2000 and +1200, respectively. Both will be motivated by the desire to reach the Playoff but neither are good options to win.

On August 7 at Michigan International Speedway, Kevin Harvick broke a 65-race winless streak with a victory at the two-mile track.

If you’ll recall, we picked Harvick to win that race at +2500, and we sincerely hope you parlayed our advice into a huge payday.

Harvick continued his winning streak with victory at Richmond Raceway last Sunday, and will try to make it three more on Sunday at Watkins Glen.

Harvick now has 60 career victories, tied with Kyle Busch for most among active drivers and ninth all-time. Though Harvick won at Watkins Glen in 2006, he has but two triumphs on road courses–in 53 starts, no less.

Take it from us. Harvick’s streak of winning will come to an end this Sunday. We think there are much better bets on the board: AJ Allmendinger to run top-three at +400 and Chris Buescher (who was second on the Sonoma Road Course) to run top-five at +350.

Other Races Happening This Week

How to Watch Go Bowling at The Glen