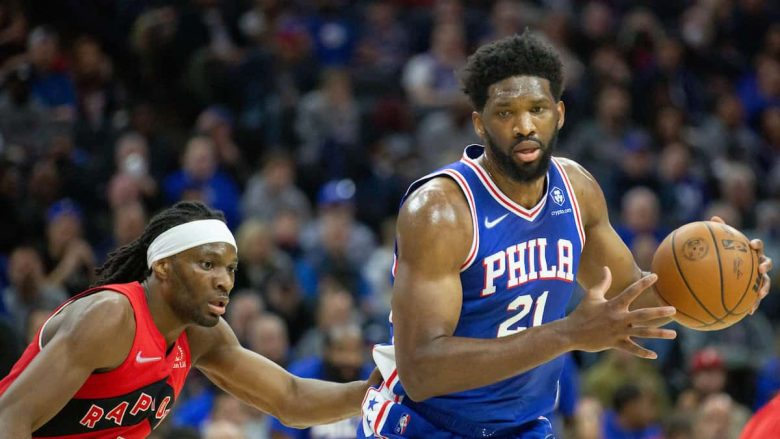 The Toronto Raptors boast one of the NBA’s most active defences and Championship-winning experience in their star players. But with home court advantage, their full complement, and two stars with chip on their shoulder, Philadelphia should come out the victor.

Get the most recent 2022 NBA Rookie of the Year odds!
If you are not sure about how to bet on NBA, see our guide!

How can the Raptors beat the Sixers?

The Toronto Raptors’ defence has been consistent through the second-half of the season. Having beaten the Sixers three times already, Toronto’s biggest concern will be their consistency on the offensive side of the ball.

While the Raptors own some very capable scorers in Pascal Siakam, Fred VanVleet, and Gary Trent Jr., none of them could be considered a superstar level number one option. While they focus on a team-oriented game based on ball movement, their 25th (44.5%) ranked field goal efficiency is telling of their offensive quality.

If the Raptors want to keep pace with the Sixers’ scoring, they’ll need to maintain their standards on the offensive glass. Ranking 2nd in the NBA in offensive rebounding (13.4), Toronto have shown the blue-collar mentality that can keep them in any game.

When Pascal Siakam was struggling with injury, the Toronto Raptors were barely treading water in the East. However, now with a healthy roster and a Pascal Siakam with championship experience, Siakam looks ready to lead the Raptors to another deep playoff run.

Despite opening the season averaging 17.9 points, 7.1 rebounds, and 3.7 assists through November, Siakam closed March/April averaging 27.2 points, 9.5 rebounds, and 5.6 assists – all while shooting over 50% from the field.

Siakam gave the Sixers fits this season, as he averaged 30.3 points, 8.7 rebounds, and 8.3 assists on 50.7% shooting from the field against them. Philadelphia haven’t been able to contain him through the regular season, which should open up opportunities for the Raptors as a whole.

How can the Sixers beat the Raptors?

The Philadelphia 76ers are likely in for a tougher first round matchup than most of the Eastern Conference top four. The Toronto Raptors have presented problems for Philadelphia all season long, and they must now reach four wins before them.

Despite having one of the league’s most dominant big men on their team, the Sixers have struggled to contain the Toronto Raptors on the glass through the season. Philadelphia were outrebounded by Toronto by an average of 7.6 through their 1-3 regular season series.

Controlling the pace of play with rebounding will be key for the Sixers. Embiid will surely lead the way, but players like Tobias Harris, James Harden, and Matisse Thybulle must contribute on the glass to help make up the difference.

Look no further than the 2021-2022 NBA scoring champ and MVP candidate Joel Embiid when considering the key player for the Sixers. Considering Embiid’s historical struggles against the Raptors, now is the perfect time for the Sixers star to show he’s a Championship-level talent.

Embiid has put up averages of 30.6 points, 11.7 rebounds, and 4.2 assists in 68 games played this season. He’s increased his output, and with the unreliable nature of James Harden since his arrival, Embiid will be relied upon even more in the playoffs.

Embiid will have the size advantage against the Toronto Raptors, but he’s struggled against their aggressive defense in the past. If he can limit turnovers and still score with efficiency, the Raptors will have no answers for him.

How to Watch Toronto Raptors vs Philadelphia 76ers