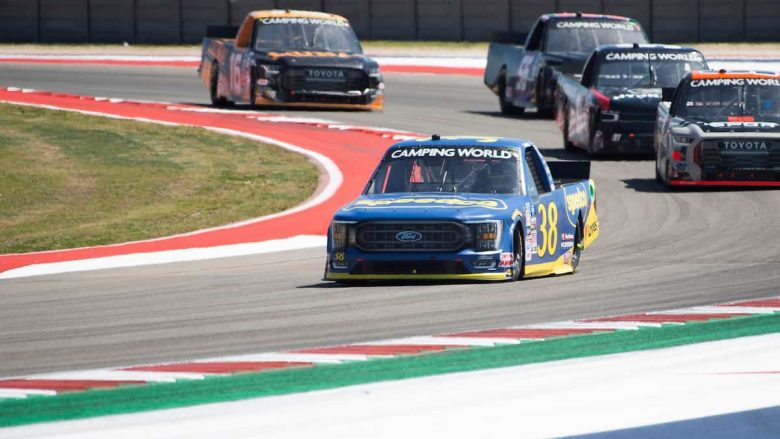 While the NASCAR Cup and Xfinity Series prepare to mix it up on the Grand Prix Course at Indianapolis Motor Speedway this weekend, the NASCAR Camping World Truck Series will start its seven-race Playoff a few miles away at Lucas Oil Indianapolis Raceway Park.

After an 11-year hiatus, the trucks return to the classic .686-mile short track for the first round of the elimination Playoff. After three races, the field of Playoff competitors will be cut from 10 drivers to eight.

Having captured the regular-season championship, Zane Smith enters the first Playoff race with a 15-point lead over second-place Chandler Smith (no relation). Despite that cushion, Zane has vowed not to change his approach in the Playoff and will race to win.

So far, he’s the only three-time winner in the series, and we think he’ll add a fourth on Friday. At +400 via DraftKings Sportsbook, he gets a reasonable price as the favorite.

In a jarring wreck at World Wide Technology Raceway in June, Carson Hocevar broke the tibia in his right leg, just above the ankle.

Cleared to race the following week at Sonoma, Hocevar—still walking with crutches—won the pole and finished sixth in the race.

After a 35th-place result on dirt at Knoxville Raceway, the result of an engine failure, Hocevar has finished third, third and fifth in his last three starts. We think he’ll finish in the top three at the Indy short track and urge a bet to that effect at +200.

Though the odds are short, we think this is a solid bet on a driver hungry to do well in the Playoff.

Chandler Smith Comes to Indianapolis with a Full Head of Steam

Kyle Busch Motorsports driver Chandler Smith picked up his second victory of the season in the Playoff cutoff race last Saturday at Pocono.

In doing so, he claimed the second seed position on the Playoff grid, trailing Ford driver Zane Smith by 15 points.

However, we don’t see a good bet on Chandler Smith in Friday night’s race at the Lucas Oil Indianapolis Raceway Park short track.

Instead, we prefer a bet on Zane Smith to win his head-to-head matchup against John Hunter Nemechek at -120. Nemechek simply hasn’t been able to put a solid season together this year and has but one victory to show for his efforts.

How to Watch the TSport 200