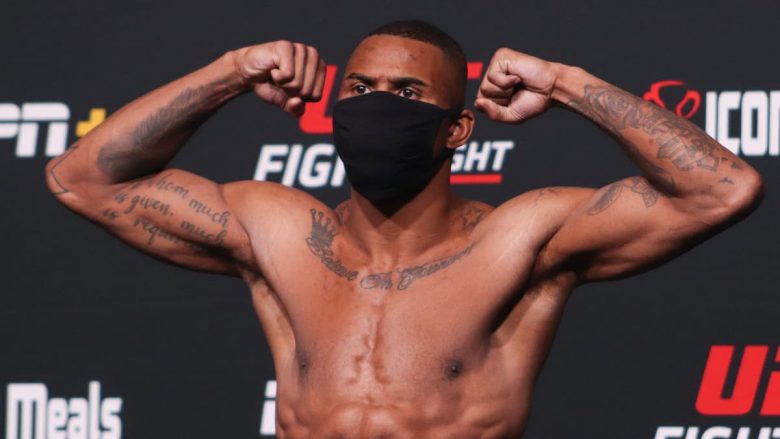 “Rudeboy” Randy Brown is currently on a two fight winning streak after snatching a first round submission vs Alex Oliveira and a unanimous decision vs Jared Gordon. Although Randy Brown may be the better and more technical fighter, Khaos Williams is showing that it doesn’t take much to win a fight. Brown’s most recent losses were both by knockout, including one via hammerfists from bottom position vs Niko Price in 2018. Two of Khaos Williams’ losses in UFC were by knockout.

Very good matchup here between two technically gifted fighters who like to mix up all three elements of MMA. Macy Chiasson won two decisions over Shanna Young, Marion Reneau and then lost to Raquel Pennington in the second round. Norma Dumont, on the other hand, lost her UFC debut via an elbow KO to Megan Anderson. She then went on to win three more UFC fights, each by judges’ decision. Ashlee Evans Smith and Felicia Spencer were also defeated by her.

Brandon Royval went on a two fight winning streak when he joined the UFC defeating very high level opposition in Tim Elliot and Kai Kara France before suffering back to back defeats to Brandon Moreno and Alexandre Pantoja. After defeating Rogerio Bontorin in January, Royval was back in the win column. Matt Schnell lost to Bontorin’s last fight, but he was victorious by unanimous decision. They both have excellent grappling and striking abilities and were able to defeat strong opponents in UFC.

Blagoy Ivanov has proven to UFC fans over the years that he can hang in there with the top guys in the division with decision wins over Ben Rothwell and Tai Tuivasa, as well as split decision losses to Derrick Louis and Augusto Sakai. Ivanov, a former Sambo world champion, has not produced a finish since 2017 before he joined the UFC, however he has also never been knocked out in his career so far. Marcos Rogerio De Lima is an accomplished finisher who has multiple first-round finishes. De Lima is a prolific finisher with multiple first round finishes.

Former lightweight Francisco Trinaldo currently holds a record of 1-1 with a KO loss to Muslim Salikhov and a split decision win over Dwight Grant. His opponent Danny “Hot Chocolate” Roberts, who is a natural Welterweight, is currently on a two fight winning streak with a knockout win over Zelim Imadaev back in 2019 followed by a split decision win over Ramazan Emeev last October. Michel Pereira, Roberts’s last loss was in Round 1. He ended the fight with a ground strike and a flying knee. Roberts may be the youngest fighter but Trinaldo is more experienced and should win this fight.

Fantastic women’s Flyweight fight here featuring the undefeated Melissa Gatto and Tracy Cortez, who hasn’t lost a fight since her MMA debut back in 2017. Cortez, a well-rounded fighter, has yet to lose a fight. She uses all aspects of MMA in her fights. Gatto has won half her fights via finishes and currently holds a streak of three finishers, including a submission and a stoppage by a doctor. She also recently defeated Sijara Eubanks with a body kickKO. Cortez and Gatto have high-level grappling skills. Gatto will seek to win the fight.

Kleydson Rodriguez is a huge Flyweight division prospect who enters the UFC with great momentum coming off a six fight win streak, mostly consisting of finishes. Like many other UFC fighters, he joined via the contest series, where he beat Santo Curatolo by unanimous decision. C.J. C.J. Vergara lost his first fight to Ode Osbourne, a Jamaican fighter. Both fighters will want to win and this will make for an entertaining fight.

Airane Carnelossi enters this bout on a streak of two back to back finishes and possesses knockout power in both hands as well as overall athleticism. Looma Lookboonmee won her last UFC bout unanimously. She is now 2-2. It is expected that Carnelossi and Godinez will be looking for an early win. Godinez will attempt to keep Godinez in check with her grappling skills, while Carnelossi will seek an aggressive finish.

Journey Newson has not had any luck in the UFC so far, suffering two defeats and a no contest due to a positive marijuana test and will be looking to turn that around in this fight. Fernie Garcia has a winning streak of five bouts and will bring that to this fight, which is his promotion debut. After impressing Dana White with his performance on the contestants series, Garcia signed up for the UFC. He defeated Joshua Weems by TKO round 1. Both fighters will be looking for a quick finish to this fight.