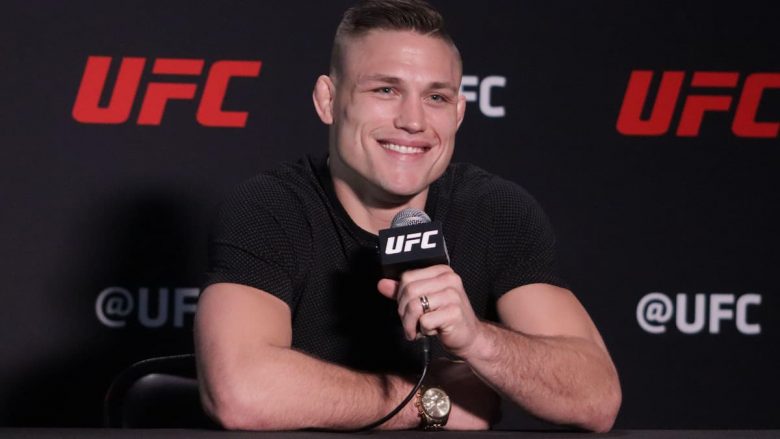 Alex Morono is arguably in the best form of his career, riding a three fight winning streak which started off with a first round TKO over UFC legend Donald “Cowboy” Cerrone, before going on to win two unanimous decisions in a row over David Zawada and Mickey Gall.

“The Great White” is a fifteen fight veteran in the promotion and has been with the UFC since 2016, achieving a record of 10-4-0 and one no contest so far.

Overall Alex Morono is more of a point fighter rather than a KO or submission specialist and has won the vast majority of his fights by unanimous decision.

Matt Semelsberger started off his UFc career with a two fight winning streak, winning his debut over Carlton Minus by unanimous decision, before going on to knock out Jason Witt in the first round of his second UFC fight.

Semelsbergers only UFC loss so far was against Khoas Williams who defeated him by unanimous decision back in 2021.

“Semi The Jedi” bounced back from the loss with another winning streak, knocking out Martin Sano in round one before winning a unanimous decision over AJ Fletcher in his most recent bout.

Expect Semelsberger to put pressure on Morono early to win the first two rounds and secure a decision win.

Matt Semelsberger to win by Decision (+180)

Drew Dober has been part of the UFC lightweight division since 2013 and has faced some of the most skilled fighters in the division during his time with the promotion, including Beneil Darisuh, Alexander Hernandez, Brad Riddell and even current championship contender Islam Makhachev.

Dober’s most recent fight was a dominant and quick KO victory over Terrance McKinney who he finished in the first round.

Rafael Alves earned himself a UFC contract after a win on the contender series where he defeated Alejandro Flores by guillotine choke in the second round.

His UFC debut did not go his way however as Damir Ismagulov took him the full fight distance to defeat him by unanimous decision.

Alves’s most recent fight ended in a first round guillotine choke over Marc Diakiese at UFC Vegas 42.

Drew Dober is a UFC veteran and has recently only lost to some of the best fighters in the division.

A win over Dober would be a huge statement if Alves could pull it off but if he cant an early finish over the UFC vet, its unlikely he will win a decision.

Don’Tale “Lord Kong” Mayes earned himself a UFC contract after defeating Ricardo Prasel by first round knockout on the contender series back in 2019.

Mayes made his UFC debut vs former UFC title contender Cyril Gane in a fight which he lost by heel hook submission in the third round.

“Lord Kong” would also lose his next UFC fight by submission, this time in the second round of his fight vs undefeated Rodrigo Nacimento.

Mayes put together a two fight winning streak recently with a unanimous decision win over Roque Martinez and a third round TKO over Josh Parisian in his most recent UFC outing.

Hamdy Abdelwahab is an undefeated Egyptian heavyweight fighter who made his MMA debut on Jorge Masvidal’s promotion “Gamebred Fighting Championship” where he started off his career with two first round KO wins.

“The Hammer” took this fight on short notice after Mayes’s original opponent, Justin Tafa pulled out with an injury.

Considering the low level of competition which Abdelwahab has faced so far, and the short notice nature of the fight, this should be a very easy win for “Lord Kong”

Drakkar Klose was originally supposed to fight Diego Ferreira in the fight but after Ferreira pulled out, Rafa Garcia stepped up to replace him on short notice.

Garcia puts his two fight winning streak on the line in this one after defeating Natan Levy by unanimous decision, before going on to achieve a second round rear naked choke win over Jesse Ronson in his most recent fight.

While Garcia was mainly a fight finisher before joining the UFC, three of his four fights have gone the full three rounds with the promotion so far, with two of those losses ending in defeats for Garcia.

Drakkar Klose has been in the UFC since 2017 and has always put on a great show with every one of his performances whether he wins or loses.

After suffering a second round KO defeat vs Beneil Dariush in an absolute bar burner of a fight, Klose would go on to KO Brandon Jenkins in the second round of his most recent UFC bout.

This is a fantastic matchup between two fighters with almost identical records and levels of experience.

After Ramiz Brahimaj pulled out of the fight vs Michael Morales during fight week, Fugitt stepped up to replace him.

This will be Michael Morales’s second fight in the UFC after he knocked out Solomon Renfro in the first round during his impressive debut fight.

Morales is a fantastic striker who has the ability to keep the fight on the feet and stuff takedown attempts, and considering the age difference and short notice nature of this bout, this should be an easy win for the young Ecuadorian.

Ji Yeon Kim has always proven herself to be a tough competitor in the women’s flyweight division but currently finds herself on the end of a three fight losing streak after facing some of the division’s best athletes.

Her most recent win was a second round KO over Nadia Kassem back in 2019 at UFC 243: Whittaker vs Adesanya.

Joselyne Edwards on the other hand, is coming off a unanimous decision win over Ramona Pascual in the opening fight of UFC 275.

Edwards has also struggled to find form in the UFC as she has so far won two, and lost two of her fights with the promotion.

Joselyne Edwards to win by Decision (+135)

Although Nick Negrumereanu did lose his UFC debut to Saparbeg Safarov via split decision, he bounced back from the loss to put together a three fight winning streak in the promotion so far and topped it off with a split decision win over Kennedy Nzechukwu.

Prior to all this, “Nicu” came into the UFC with a nine fight finishing streak and had never gone past the second round of a fight before his UFC debut.

Ihor Poteira got his shot on the contender series coming off a six fight winning streak which he extended to seven after defeating Lukasz Sodolski by first round KO, earning himself a UFC contract in the process.

Much like his opponent was in the past, Potieria has several finishines on his resume with a variety of KO’s and TKO’s as well as submissions but also went the full fight distance on three occasions.

A knockout is what earned Potieria his UFC contract and he will definitely want to make a big statement in his debut so expect more of the same from “Duelist”.

Orion Cosce put together a seven fight winning streak with all fights ending in finishes which he achieved by out grappling his opponents before knocking them out or submitting them.

Mike Mathetha, better known as “Blood Diamond” is a kickboxer who transitioned to MMA much like his team mate and current UFC middleweight champion Israel “The Last Stylebender” Adesanya.

Before joining the UFC, Blood Diamond had three MMA wins to his name, the first by KO, the second one by submission, and the third by unanimous decision, all of which were against low level competition.

Both of these fighters came into the UFC with undefeated records but ended up breaking the winning streaks with losses in their UFC debuts.

Cosece did not manage top out grapple Philip Rowe in his debut and ended up getting finished in the second round, while Jeremiah Wells absolutely dominated Blood Diamond and submitted him with a rear naked choke in the opening round.

Look for Cosce to exploit Mathethas grappling weakness and look for an early finish.