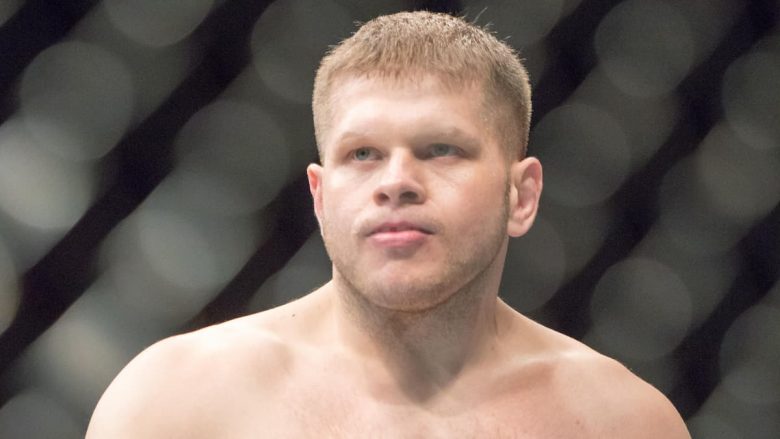 Marcin Tybura is no spring chicken when it comes to fighting at the top level of the sport of mixed martial arts and has been competing in the UFC since all the way back in 2016.

Tybura’s most recent UFC outing did not go his way as he lost a unanimous decision to Russian giant Alexander Volkov.

Prior to the recent hiccup, Tybura was on an impressive five fight winning streak where he beat Sergey Spivak, Maxim Grishin and Ben Rothwell by unanimous decision before finishing Greg Hardy and Walt Harris with ground and pound finishes.

Although Tybura has faced fifteen opponents in the UFC so far, none of them come close to being as daunting as his next one, undefeated Moldovan grappling phenom, Alexandr “King Kong” Romanov.

Prior to joining the UFC, Romanov fought primarily in his home country of Moldova at Eagles Fighting Championship where he earned a mind blowing eleven finishes in a row with nine of those finishes coming in the opening round.

After inevitably getting signed to the UFC, Romanov would earn another five wins in a row with four of those wins ending in a finish.

Romanov’s most recent win was a first round Anaconda Choke submission over Chase Sherman at UFC fight night: Vera vs Font.

All the momentum is with Alexandr Romanov going into this fight and if he pulls off an impressive win here in the featured prelim, then the UFC could have another huge star on their hands in the heavyweight division.

Alexandr Romanov to win by Submission in round one (+650)

Alexandr Romanov to win by Submission (+350)

Leonardo Santos is a long time veteran of mixed martial arts and made his MMA debut vs the (10-0 at the time) legendary Japanese fighter Takanori Gomi all the way back in 2011 during Shooto: Treasure Hunt 7.

Santos spent most of his early days in the sport fighting locally in Brazil, as well as competing internationally in Japan and the United Kingdom, before taking part in The Ultimate Fight Brazil: Season 2.

After losing to Argentinian contender Santiago Ponzinibbio in the show’s finale, Santos would go undefeated in his next eight UFC fights with seven wins and a draw, before more recently ending up on a two fight losing skid.

His two most recent fights in the UFC ended in a third round KO loss to Grand Dwson and a second round guillotine choke submission loss to fellow MMA veteran and UFC hall of famer Clay Guida.

On the other side of the octagon, we have Jared “Flash” Gordon, a long time student of the Renzo Gracie Academy in New York City with an inspirational backstory of overcoming drug addiction.

Gordon started off his pro mixed martial arts career fighting for CFFC as well as the Mexico regional where he put together a record of twelve wins alongside just one defeat before getting signed by the UFC.

He has had a bit of a mixed bag of results since joining the UFC but has fought some of the best guys the promotion could offer him such as current UFC lightweight champion Charles “Do Bronx” Oliveira, Diego Ferreira, and former Cage Warriors champion Chris Fishgold.

Its no secret that at 42 years of age, Leonardo Santos is at the tail end of his career while Jared Gordon may well be in his prime at 33.

Sean “The Sniper” Woodson was 5-0 heading into his contender series fight vs Terrance McKinney which he won via flying knee in the second round.

Woodson would go on to defeat Kyle Bochniak in his UFC debut via unanimous decision before suffering his first ever professional loss at the hands of Julian Erosa by second round rear naked choke submission.

“The Sniper” bounced back from defeat with a split decision win over Youssef Zalal before earning a first round TKO over Collin Anglin.

Luis Saldana also earned his spot on the UFC roster via a contender series win, in his case, a third round front kick to ground and pound finish over Vince Murdock.

AJ Fletcher entered his Contender series bout riding an eight fight winning streak which he extended to nine with his first round flying knee finish over Leonardo Damiani.

With three knockouts and five submissions to his name, Fletcher was full of confidence going into his UFC debut vs Matt Semelsberger, but ultimately ended up losing the fight by unanimous decision.

Ange Loosa started off his mixed martial arts career fighting in Switzerland and France before getting his shot at a UFC contract on the contender series.

Loosa faced Jack Della-Maddalena in his Contender Series bout but was defeated by the aussie by unanimous decision and was not offered a UFC contract.

Loosa then went on to defeat John Howard via unanimous decision at XMMA and was signed to the UFC right after that fight.

Unfortunately for “The Last Ninja” his UFC debut did not go as he would have hoped as he was defeated by Mounir Lazzez, again by unanimous decision.

If Fletcher can shake off the cobwebs from the debut loss and go into this fight without putting extra pressure on himself, he may get back to his first round finishing ways.

Amir Albazi made a name for himself on the European regional scene and even had two fights in Bellator and another two at Brave CF before being signed to the UFC, where he made his debut vs Malcolm Gordon, who he defeated via triangle choke at the end of round one.

In his most recent fight he dominated Kazakh fighter Zhalgas Zhumagulov to win a unanimous decision on the judges’ scorecards.

Francisco Figueiredo, brother of current UFC Flyweight champion Deiveson Figueiredo, has been a bit of a wildcard so far in the UFC.

However Figuiredo looked like an absolute world-beater in his most recent UFC outing where he defeated Daniel Da Silva via first round kneebar.

Consistency is absolutely key in mixed martial arts and Amir Albazi has put on performances worthy of a top contender as long as he’s been in the UFC while Figueiredo’s form has not been so consistent.

“The Mongolian Murderer” Aori Qileng, has been putting on show after show for UFC fans ever since joining the promotion and has had nothing but knockdown drag em out fights so far whether he wins or loses.

His first two UFC fights did not go his way and he lost both by unanimous decision to Jeff Molina and Cody Durden, but showed heart and durability in both bouts.

However Aori Qileng finally earned his first UFC victory in his most recent fight where he defeated Cameron Else with vicious ground and pound to earn the finish.

Jay “The Joker” Perrin earned most of his wins by submission fighting on the United States regional scene, mainly at Cage Titans.

Eventually Perrin would face Dwight Joseph during the 2019 Contender Series but he would suffer a unanimous decision loss during that fight.

Two more wins on the regional scene and Jay Perrin found himself making his UFC debut vs Mario Bautista in a fight which he lost by unanimous decision.

Aori Qileng has a little bit of momentum going into this fight considering his recent win and he has all the tools necessary to defeat Perrin by knockout.

Daniel Da Silva got off to a rocky start in his UFC career as he lost his debut to Jeff Molina via TKO in the second round, before suffering yet another defeat at the hands of Francisico Figueiredo via first round kneebar submission in his second fight with the UFC.

Prio to joining the UFC, Da Silva was on a three fight first round finish streak which he earned at several different promotions in Brazil.

Victor Altamirano defeated Carlos Candelario by unanimous decision to earn himself a UFC contract via the contender series.

Altamirano would end up losing his UFC debut by a close split decision to Carlos Hernandez at UFC Fight Night: Makhachev vs Green.

Both fighters are similarly skilled and both find themselves in desperate need of a win if they are to break through the flyweight top 15.

Daniel Da Silva to win by Submission in round one (+900)