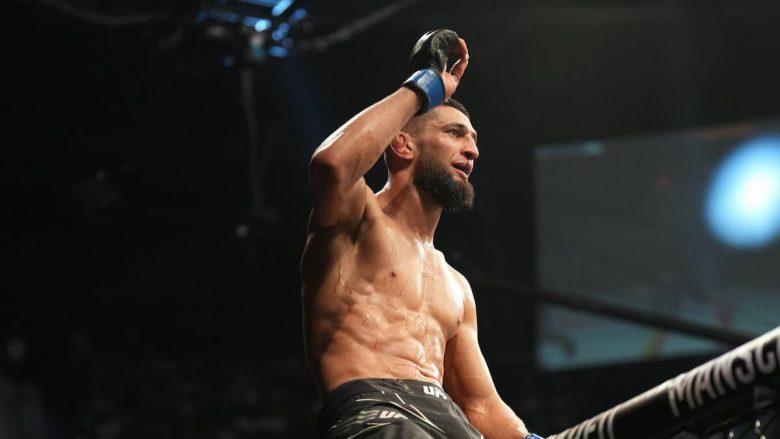 He will go toe-to-toe with UFC legend Nate Diaz, who will be fighting in his fourth non-title PPV main event.

Diaz last fought against the now-welterweight champion Leon Edwards. Despite coming close to a knockout in the fifth round, it was Edwards that was awarded the unanimous decision victory at UFC 263 last June.

Undefeated as a professional, Chimaev has wins in both the UFC welterweight and middleweight divisions. After finishing all four of his UFC fights, Chimaev’s most recent fight proved to be his toughest test.

He last fought Gilbert Burns at UFC 273 this past April. Burns brought Chimaev to a judge’s decision for the first time in his career. Chimaev was awarded the decision victory and the two men were awarded fight of the night honors.

Chimaev will stand two inches taller but Diaz will have a one-inch reach advantage.

To find out how to place your bets for this welterweight main event, check out our ultimate UFC betting guide to get started.

Ferguson’s last bout, which took place at UFC 274 this past May, came against Michael Chandler – who knocked Ferguson out with a front kick in the second round.

His fight against Li Jingliang this Saturday will be Ferguson’s first welterweight bout under the UFC banner, after having competed as a lightweight since 2011.

Li Jingliang recently bounced back from a loss to Khamzat Chimaev with a second-round TKO over Muslim Salikhov this past July. He earned a performance of the night bonus.

Listed as a -295 favorite, Jingliang will still find himself at a reach disadvantage of 4.5-inches.

Kevin Holland TALE OF THE TAPE Daniel Rodriguez 29 Age 35 6 ft. 3 in. Height 6 ft. 81 in. Reach 74 in. 23-7, 1 no-contest Record 16-2 Believed to be scheduled to fight another opponent in October, Kevin Holland now finds himself matched up against Daniel Rodriguez with just two-weeks notice.

The two welterweights will fight at a catchweight of 180-pounds due to the short amount of time to prepare.

Holland, who moved down to the UFC welterweight division at the start of 2022 has gone 2-0 since the weight change. He most recently submitted Tim Means this past June.

Rodriguez is riding a three-fight winning streak. His most recent bout came against Kevin Lee, whom he defeated via unanimous decision last August.

Holland will stand three inches taller and have a reach advantage of seven inches. He is listed at -196.

Her opponent, Macy Chiasson, is coming off of a split-decision win over Norma Dumont that took place at UFC 274 this past May.

Chiasson, an Ultimate Fighter tournament winner, will have a three-inch reach advantage in the fight against Aldana. Despite this, she is a +144 underdog.

Just 1-3-1 over his last five fights, Ion Cutelaba most recently succumbed to a first-round guillotine choke at the hands of Ryan Spann this past May.

Johnny Walker is 1-4 over his last five fights, having lost his last two in a row. His last fight took place in February when he was knocked out by Jamahal Hill in the first round.

Walker is the taller man and will also enjoy a significant seven-inch reach advantage. However, at -196, Cutelaba is the favorite to win according to oddsmakers.

How to Watch UFC 279: Chimaev vs Diaz