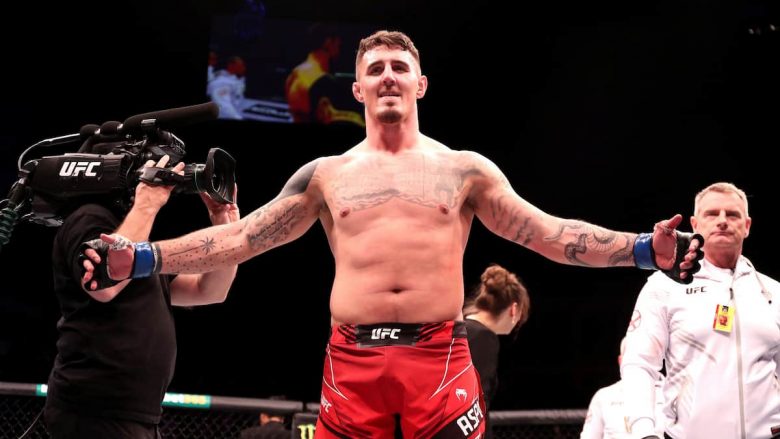 Aspinall is riding an eight-fight winning streak and has three performance bonuses in a row.

He last fought Alexander Volkov in March and defeated him via first-round submission.

Aspinall takes on the number-four ranked Curtis Blaydes, who is riding a two-fight winning streak and most recently defeated Chris Daukaus via TKO in the second-round this past March.

To find out how to place your bets for this heavyweight division main event, check out our ultimate UFC betting guide to get started.

Jack Hermansson TALE OF THE TAPE Chris Curtis 34 Age 35 6 ft. 1 in. Height 5 ft. 10 in. 77.5 in. Reach 75 in. 22-7 Record 29-8 Undefeated in the UFC at 3-0 and riding an eight-fight professional winning streak, Chris Curtis steps in to replace an injured Darren Till for this co-main event against Jack Hermansson.

Hermansson has gone just 3-3 over his last six bouts. After defeating Edmen Shahbazyan last May, Hermansson most recently fought Sean Strickland. Unfortunately Hermansson was defeated via unanimous decision in the Strickland fight that took place earlier this year.

Hermansson will stand two-inches taller and have a 2.5-inch reach advantage.

Paddy Pimblett TALE OF THE TAPE Jordan Leavitt 27 Age 27 5 ft. 10 in. Height 5 ft. 9 in. 73 in. Reach 71 in. 18-3 Record 10-1 Like his countrymate Tom Aspinall, Paddy Pimblett finds himself on another fight card in England just four months after his last appearance.

Pimblett is 2-0 in the UFC, having defeated Luigi Vendramini via KO and, most recently, Rodrigo Vargas via first-round submission.

Jordan Leavitt is 3-1 in the UFC and has won his last two straight. He most recently fought this past April, defeating Trey Ogden via split-decision.

Pimblett, who boasts a first-degree black belt in Brazilian jiu-jitsu, will have a two-inch reach advantage over the southpaw Leavitt.

After his submission loss to former heavyweight champion Fabricio Werdum in 2020, Gustafsson took time off to recover from injury and even had two fights canceled.

Like Gustafsson, Nikita Krylov is in the midst of his own losing streak, having lost back-to-back contests to Magomed Ankalaev and, most recently, Paul Craig.

Krylov has a black belt in karate but will be at a reach disadvantage.

Molly McCann TALE OF THE TAPE Hannah Goldy 32 Age 30 5 ft. 4 in. Height 5 ft. 4 in. 62 in. Reach 61 in. 12-4 Record 6-2 Another English favorite, Molly McCann also fought on the previous O2 arena card this past March – defeating Luana Carolina in the third round with a devastating spinning back elbow knockout.

She was awarded a performance bonus and the KO marked her second straight win.

With more experience and her purple belt in Brazilian jiu-jitsu, at -380, Molly McCann is the biggest betting favorite on the main card.

Craig has now won five straight (with one draw) and most recently defeated Nikita Krylov last March via – you guessed it – submission!

Oezdemir, the former kickboxer, will be at both a height and reach disadvantage.

Craig boasts a black belt in Brazilian jiu-jitsu and is listed at -165.

How to Watch UFC Fight Night: Blaydes vs Aspinall