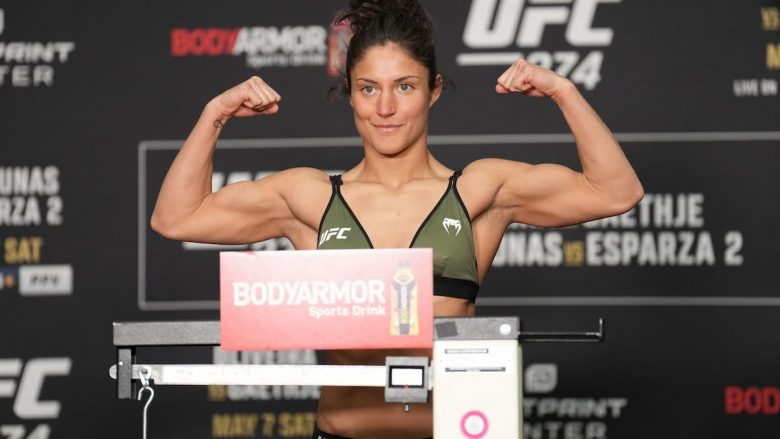 Former Invicta FC champion Angela “Overkill” Hill has had some terrible luck over the past six fights with five razor sharp close decisions not going in her favour.

Her most recent win was a unanimous decision over Ashley Yoder in March of 2021 but has since lost three decisions in a row to Tecia Torres, Amanda Lemos and Virna Jandiroba consecutively.

Most of Angela Hill’s fights end in a judge’s decision but she also has a couple of knockouts on her record, and her most recent finish was a second round ground and pound TKO over Hannah Cifers.

Loopy Godinez is one of the strongest prospects to compete in the UFC women’s flyweight division in a while and has so far won three fights while suffering two losses since being on the big stage.

While Godinez lost her debut to Jessica Penna via unanimous decision, she would go on to win her next fight via first round armbar over Silvana Gomez-Juarez.

Following a close decision loss to Luana Carolina, “Loopy” would go on to stack up another two unanimous decision wins in a row over Looma Lookboonmee and Ariene Carnelossi.

This is a very close matchup on paper but the grappling strength and cardio of Godinez should be enough to earn a decision win in this bout.

Lupita Godinez to win by Decision (-150)

Both of these fighters made it to the UFC via the Contender series route where both fighters finished their opponents to earn a UFC contract.

This will be Lukasz Brzeski’s UFC debut and he puts his five fight winning streak on the line in search of another fight finish to solidify his spot in the UFC’s heavyweight division.

Brzeski has four knockout wins to his name alongside four judges’ decisions and a rear naked choke submission.

Martin “Badys” Buday brings an even longer finishing streak into this fight with an astounding nine wins in a row.

Though “Badys” did get his hand raised in his most recent fight, it did not end the way he envisioned as he landed unintentional strikes to the back of Chris Barnett’s head and the fight ended in a technical decision which luckily went in his favour.

Buday is a fight finisher at heart and always looks to end the night early with a highlight reel worthy knockout win.

Check out our picks and the current odds for the PFL 8 main card here!

Cynthia Calvillo joined the UFC back in 2017 as a 3-0 prospect with tons of potential and tenacity in her fighting style but is currently on the worst run of form in her pro mixed martial arts career.

Her current losing streak started in 2020 with a unanimous decision loss to Katlyn Chookagian, followed by a first round knockout loss to Jessica Andrade and a second round corner stoppage to Andrea “KGB” Lee in 2021.

Overall Calvillo is a strong contender with excellent striking and jiu jitsu and she recently switched gym’s from Team Alpha Male to the American Kickboxing Academy where she will surely add more tools to her already solid skillset.

Nina Nunes is a veteran of women’s mixed martial arts and has been active in the sport since 2012.

Her UFC debut did not go her way and neither did her second UFC fight as she lost two unanimous decisions in a row to Juliana Lima and Justine Kish before putting together a four fight winning streak including wins over top contenders Angela Hill and Claudia Gadelha.

Nunes is not much of a power puncher or a submission artist and most of her wins came by way of judges’ decisions.

Both these fighters will be hungry for a win to break their losing streaks but Calvillo is just a little bit better than Nunes overall and should take the victory.

Cynthia Calvillo to win by Decision (+150)

Check out our predictions and picks for Bellator 284: Gracie vs Yamauchi here!

Gabriel “Moggly” Benitez finds himself at the tail end of his career at the point having won just one of his last five fights.

His last win was a first round TKO over Justin Jaynes via knees to the body, but since the fight Bentiez has been finished twice, the first was a third round TKO loss to Billy Quarantillo, followed by a first round standing TKO courtesy of David Onama.

Charlie Ontiveros made a name for himself fighting in various promotions such as Fury FC, Bellator, Legacy FC and LFA before getting signed by the UFC.

He had a nightmare debut as he was slammed to the canvas by Kevin “Trailblazer” Holland and suffered a neck injury, instantly ending the fight.

His most recent fight was yet another UFC loss, this time to Steve Garcia who finished Ontiveros with ground and pound in the second round.

Overall Charlie Ontiveros looked like a very strong contender coming into the UFC but was thrown into the deep end right away, this time around however, he is in a winnable fight.

Fight to go the distance: No (TBA)

“The Jamaican Sensation” Ode Osbourne is on his best run of form so far since joining the UFC through a 2019 Contender Series win.

It was a first round armbar win over Armando Villareal that earned him a UFC contract, but in his UFC debut he was on the opposite end of things as Brian Kelleher submitted him with a guillotine choke in round one.

Osbourne bounced back from the debut loss with a first round knockout over Jerome Rivera in his second UFC fight, but he would once again suffer a first round defeat, this time by first round flying knee knockout to Manel Kape.

Osbourne’s current two fight winning streak consists of a unanimous decision over C.J. Vergara and a first round TKO of Zarrukh Adashev in his most recent UFC outing.

Tyson Nam is an OG of the fight game and has been competing in the sport of mixed martial arts since 2006 but it took until 2019 for him to get signed by the UFC.

He had a rocky start to things in the promotion suffering two unanimous decision defeats in a row at first to Sergio Pettis and Kai Kara-France before earning two consecutive finishes over Zarrukh Adashev and Jerome Rivera.

His most recent UFC fight ended in a super close split decision loss vs Matt “Danger” Schnell and that should motivate Nam to look for a finish in this fight, although he will have his hands full with Ode Osbourne’s unorthodox movement.

Jason Witt AKA “The Vanilla Gorilla ” gained tons of experience on the region scene in the United States with appearances for Bellator and LFA in the past.

Witt lost his UFC debut vs Takashi Sato by first round TKO before going on to win his next fight vs Cole Williams by arm triangle choke in the second round.

Josh Quinlan is undefeated in both his amateur and pro MMA careers and enters his UFC debut riding an impressive eleven fight winning streak.

Quinlan finishes fights early and by any means necessary with several submissions and knockouts to his name.

Quinlan is going into this fight with multiple advantages including height, reach and well as a six year age gap between the two fighters.

Expect Quinlan to look for a takedown and land some ground and pound for an early finish in this fight.

Youssef Zalal was one of the hottest prospects to join the UFC in 2020 where he won his first three fights in a row by unanimous decision over Austin Lingo, Jordan Griffin and Peter Barrett consecutively.

The Moroccan Devil’s impressive winning streak came to an end when he faced Ilia Topuria, who defeated him via unanimous decision at UFC Fight Island 5.

Da’Mon Blackshear is a newcomer to the UFC and he makes his debut vs Zalal after four consecutive wins on the regional scene, with three of those ending in submission finishes.

“Da Monster” is a jiu jitsu specialist through and through and patiently looks for openings in his fights in order to snatch his opponents neck for a rear naked choke.

Blackshear has all the momentum on his side going into this fight and he will be full of confidence considering his winning streak and Zalal’s current string of losses.

Da’Mon Blackshear to win by Submission in round two (+2500)

Da’Mon Blackshear to win by Submission (+400)