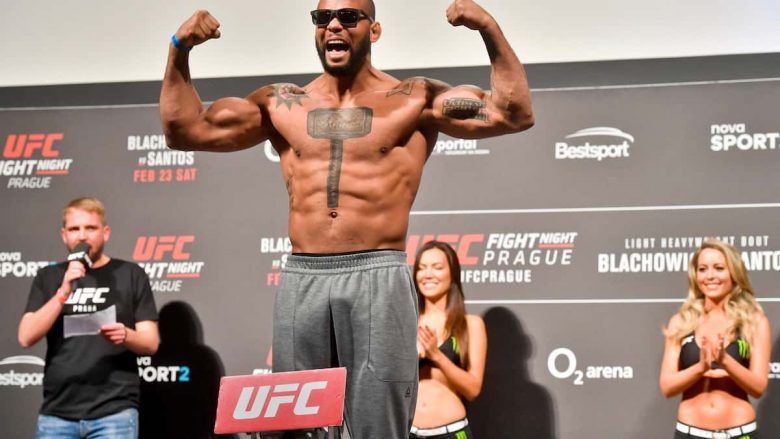 Thiago Santos TALE OF THE TAPE Magomed Ankalaev 38 Age 29 6 ft. 2 in. Height 6 ft. 3 in. 76 in. Reach 75 in. 22-9 Record 16-1 With number-five ranked Thiago Santos taking on number-six ranked Magomed Ankalaev, we could very well be looking at a number-one contender bout for the light heavyweight title this Saturday night. Thiago Santos, a former title challenger had previously lost two consecutive fights after returning from knee surgery. He enters the contest after a win by unanimous decision over Johnny Walker in October.

Magomed Ankalaev, who has won his last seven in a row, most recently defeated Volkan Oezdemir last October at UFC 267. He hasn’t lost in the UFC since his debut in 2018.

Ankalaev boasts a master of sport in sambo while Santos holds balck belts in both muay thai and Brazilian jiu-jitsu.

It is Magomed Ankalev who is the favorite at -650 – the largest betting favorite on the main card. To find out more about placing your wagers on UFC Fight Night you can visit our Ultimate UFC Betting Guide.

Despite holding black belts in muay thai and Brazilian jiu-jitsu, Moraes enters this fight as the +205 underdog.

Yadong, a product of Team Alpha Male, is nine-years younger and two-inches taller.

Sodiq Yusuff TALE OF THE TAPE Alex Caceres 28 Age 33 5 ft. 9 in. Height 5 ft. 9 in. 71 in. Reach 73.5 in. 11-2 Record 19-12, 1 no-contest Don’t let his record fool you – Alex Caceres has been on a career resurgence lately, having won his last five fights in a row. Seung Woo Choi was defeated by him via submission in the second round, which earned him Performance of the Night.

Sodiq Yusuff is coming off of his first UFC loss. Yusuff lost his fourth fight in UFC. He had won the first four bouts. However, he was defeated by Arnold Allen.

Despite this, Yusuff is still considered a big -245 favorite despite Caceres’ reach advantage.

Bet on Santos vs Ankalaev Here!

Khalil Rountree Jr. TALE OF THE TAPE Karl Roberson 32 Age 31 6 ft. 1 in. Height 6 ft. 1 in. 76.5 in. Reach 74 in. 9-5, 1 no-contest Record 9-4 Both of these light heavyweights are looking to get things on track as neither man has been able to find consistent success within the UFC promotion.

Khalil Rountree is coming off of a win over Modestas Bukauskas last September, but it was Bukauskas who suffered a knee injury in the fight, causing the doctor to announce Rountree as the winner via TKO. His two previous fights were lost.

Karl Roberson has lost back-to-back contests – most recently being submitted with an ankle lock by Brendan Allen last April at UFC 261.

Roberson is the slight favorite heading into Saturday’s matchup.

Drew Dober, a UFC veteran of more than 15 fights has lost his last two in a row – most recently dropping a decision to Brad Riddell at UFC 263 last June. He has received three performance bonuses in his four previous fights.

Dober has a brown belt in Brazilian jiu-jitsu and black belt in taekwondo but McKinney has the height and reach advantage. But his lack of UFC experience makes McKinney the underdog at +144.

Alex Pereira TALE OF THE TAPE Bruno Silva 34 Age 32 6 ft. 4 in. Height 6 ft. 80 in. Reach 74 in. 4-1 Record 22-6 Having won his last four fights in a row, Saturday will mark only the second UFC fight for Alex Pereira – who most recently defeated Andreas Michailidis via second-round TKO last November at UFC 268.

Despite Pereira’s early promise, he has nowhere near the experience of Bruno Silva, who will be making his fourth octagon appearance and who has won his last seven fights in a row.

Pereira does have the physical advantages however, boasting a four-inch height advantage and six-inch reach advantage. He is a -178 favorite.

Bet on Santos vs Ankalaev Here!

How to Watch UFC Fight Night: Santos vs. Ankalaev