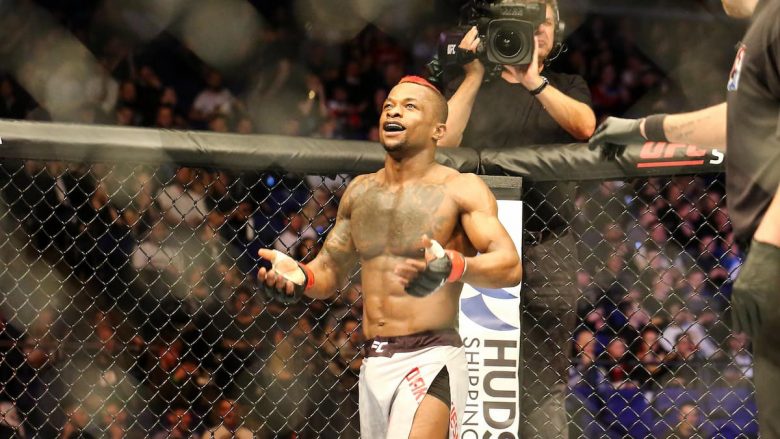 “The Dragon” unfortunately lost his UFC debut to Mike Davis who defeated him by unanimous decision.

With his next fight vs Alan Patrick ending in a no contest due to an accidental eye poke, Jones would move on to face and defeat David Onama by unanimous decision.

L’udovit Klein was notorious for first round finishes a few years back but his momentum has since seemed to slow down a little since joining the UFC.

He had a fantastic UFC debut where he got a first round KO over Shane Young with a head kick followed by punches.

The following two fights would not go his way however as he would lose to Mike Trizano by unanimous decision before getting submitted in the third round by Nate Landwehr five months later.

Klein did get his hand raised in his most recent UFC outing however, where he defeated Devonte Smith by split decision at UFC 272: Covington vs Masvidal.

Jones has what it takes to break Klein down over the first two rounds and tire him out to earn a late finish in the third round.

Marc Diakiese has been representing the UK in the UFC since 2016 and has put on a mixture of flashy performances, as well as some lacklustre ones too.

His most flashy finish was back at UFC Fight Night 107 where he knocked out Teemu Packalen in the first round, however just after that he would go on a run of bad form losing three fights in a row to Drakkar Klose, Dan Hooker and Nasrat Haqparast.

A couple of wins and losses later, “Bonecrusher” would face Viacheslav Borshchev and defeat him by unanimous decision.

Damir Hadzovic is a well rounded fighter with great fundamental MMA skills, but unlike his opponent, does not throw anything flashy or unorthodox.

The Bosnian Bomber’s most recent win is a perfect example of that as he outscored Yance Medeiros over three rounds to secure a unanimous decision win.

Overall considering the style matchup, Diakiese is likely to surprise his opponent early and try to land something he won’t see coming.

Nathaniel Wood made his UFC debut back in 2018 and started things off with a second round D’Arce choke over Johnny Eduardo.

He made it three wins in a row in the sport’s biggest promotion with another two submission victories over Andre Ewell and Jose Alberto Quinonez.

“The Prospect” would suffer his first loss to former Flyweight contender John Dodson who finished him with a left hook followed by ground and pound.

Wood went on to bounce back with a win over John Castaneda which he secured via unanimous decision.

Nathaniel’s most recent bout ended in a loss to Casey Kenney who defeated “The Prospect” by unanimous decision.

Charles Rosa has been in the UFC since 2014 and has had a very rocky journey with the promotion with five wins and seven losses so far.

He is known to give his opponents problems on the ground and always presents a submission threat although it’s no secret that “Boston Strong” is at the tail end of his career at this point.

With a seven year difference in age, look for Wood to be the quicker fighter and the feet and pepper his opponent with shots throughout the fight before looking for a ground and pound finish.

Makwan Amirkhani has been in the UFC since 2015 and has so far put together a record of seven wins to five losses with the promotion.

He is a submission threat in the opening rounds as demonstrated in his most recent fight which resulted in a first round anaconda choke win over Mike Grundy.

Fighting out of SBG in Ireland, Amirkhani is not an easy matchup for anyone in the division and all his UFC losses were handed to him by elite level opposition such as Edson Barboza, Shane Burgos and Arnold Allen.

Jonathan “JSP” Pearce first got his shot at a UFC opportunity in the form of a contender series fight which he won handily with a right cross KO over Jacob Rosales.

His next fight did not go his way however as he would be defeated by MMA veteran Joe Lauzon by first round ground and pound TKO.

JSP rebounded from that loss and has so far stacked up three wins in a row over Kai Kamaka III, Omar Morales and Christian Rodriguez.

Look for JSP to survive the early grappling onslaught by Amirkhani in search of a late knockout finish!

Muhammad Mokaev has been to talk of the town on the UK’s regional scene and so far remains undefeated with a 30 fight winning streak starting back in his amateur days.

His UFC debut went very much his way as he earned a first round finish over Cody Durden, further solidifying his legitimacy and showing he is ready for the biggest stage in MMA.

Mokaev has multiple first round finishes to his name and is incredibly well rounded, with excellent striking and elite submission skills to go along.

Charles Johnson is in the best form of his career and has put together four wins in a row going into this matchup.

With two knockout finishes in his last two fights, Johnson will be looking to steal all the hype from his opponent in this bout, but will undoubtedly be up against his most skilled opponent to date.

Mokaev has submitted multiple opponents with ease in the opening rounds in the past and that has always been his plan A.

The most likely outcome is yet another first round submission by “The Punisher” and most likely he will take his opponents back for a rear naked choke.

Muhammad Mokaev to win by submission in round one (+380)

Muhammad Mokaev to win by submission (+180)

Both of these fighters have so far only achieved one win in the UFC alongside three losses, but despite the similarities in stats, Jai Herbert opens as a big favourite over Kyle Nelson in this matchup.

After putting together four finishes in a row at Cage Warriors, it was time for Jai Herbert to make his UFC debut.

He would face Francisco Trinaldo in his opening fight and Herbert was caught with a vicious overhand in the third and final round, resulting in a KO loss.

Herbert would suffer a second round submission loss to Renato Moicano following the debut, before going on to earn his first UFC victory in the form of a ground and pound first round finish over Khama Worthy.

In his most recent bout, Herbert was knocked out by Ilia Topuria in the second round of a fight night bout.

Kyle Nelson made his UFC debut coming off a six fight winning streak on the regional scene in North America.

Diego Ferreira would welcome the Canadian into the UFC and handed Nelson his first of three losses in the promotion.

After Ferreira finished him in the second round, Nelson would lose his following fight by third round submission to Matt Sayles before securing his first UFC win over Polo Reyes with a wicked first round KO.

His most recent fight vs Billy Quarantillo also ended in a loss, this time by third round knockout after a breathtaking opening two rounds.

Considering the fact that Herbert likes to get striking exchanges going early on whereas Nelson tends to take his time, a first round knockout for Herbert is a big possibility.

Mandy Bohm put together a seven fight winning streak topped off with a Bellator win over Griet Eeckhout before making her UFC debut.

She faced Ariane Lipski in her UFC debut and suffered her first pro mma career loss by unanimous decision.

She has multiple first round finishes on her record and will likely be looking for another one in this fight considering her opponent has been finished multiple times in her career.

Victoria Leonardo had a few fights around the regional scene and also featured in Bellator as well as Invicta FC.

“Fury” defeated Chelsea Hackett on the contender series back in 2020 via ground and pound in the second round, however she would soon suffer the same fate as Leonard would go on to lose her next two fights by second round stoppage.

Considering Bohm’s finishing ability and Leonardo’s willingness to trade strikes, a finish in the early rounds is very likely.

UFC veteran Claudio Silva finds himself on his first ever losing streak in the sports top promotion.

He started off his UFC journey back in 2014 when he defeated brad scott by unanimous decision before going on to earn a split decision victory over current welterweight title challenge Leon “Rocky” Edwards.

He put together a whopping 14 fight winning streak before suffering his first of two UFC losses to James Krause by unanimous decision.

His next and most recent loss in the UFC was a unanimous decision loss to Court McGee.

Nicolas “Danish Dynamite” Dalby is on his second UFC stint after having a bad run the first time around.

He made his UFC debut back in 2015 where he defeated Elizeu Zaleski by split decision, before going on to lose his next two UFC fights in a row, both by unanimous decision.

After being cut from the UFC, Dalby extended his losing streak to three fights in a row when he faced Carlo Pedersoli at Cage Warriors 93, in a fight which he lost by split decision.

Dalby put together five wins with a couple of no contests in between to put the losing streak behind him, however in his most recent fight he was once again defeated by unanimous decision, this time by Tim “The Dirty Bird” Means.

Despite all that, Dalby will have a huge strength and punch power advantage going into this one and should be able to handle Silva’s grappling attacks when they come.

Look for Dalby to put the “Danish Dynamite” to use and get an early knockout.