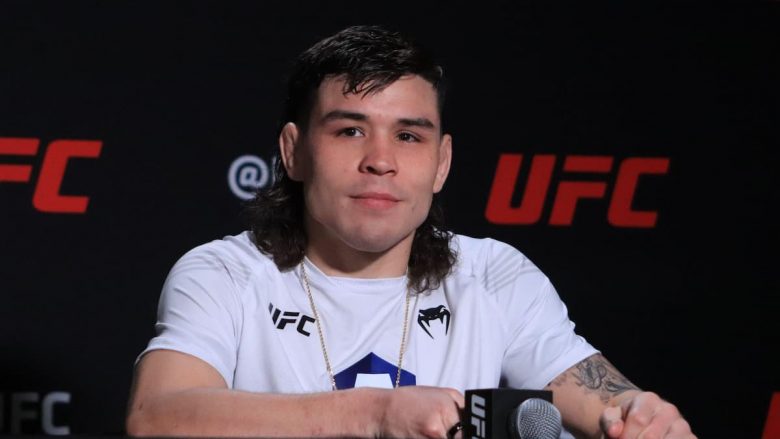 Punahele Soriano put together a five fight first round finishing streak before getting called up to compete on the contender series to face Jamie Pickett.

Pickett would be Soriano’s most experienced opponent to date but he nonetheless won the bout by unanimous decision and impressed the UFC brass enough to earn himself a UFC contract.

“Puna” would soon return to his fight finishing ways during his promotional debut, as he finished his next opponent, Oskar Piechota by left hook knockout in the first round.

Just over a year later, during UFC on ABC 1, Soriano would earn yet another first round knockout, this time vs undefeated 10-0 Russian prospect Dusko Todorovic, extending his own undefeated pro record to 8-0.

Brendan Allen would eventually end up being the fighter to end Soriano’s undefeated streak when the pair went head to head at UFC Fight Night: Sandhagen vs Dillashaw.

The rough patch would not end just yet however, as for the first time ever, Soriano would find himself on a two fight losing streak.

Nick Maximov would hand Soriano his next defeat via razor sharp split decision during the co-main event of UFC Fight Night: Hermannson vs Strickland.

Dalcha Lungiambula had a great run on the regional scene in Africa where he competed for the majority of his career under the EFC banner.

He entered the UFC with a record of 9-1 and quickly made a statement and he knocked out Dequan Townsend in the 3rd round of his debut in the promotion.

He would suffer his first UFC loss in the following fight as Magomed Ankalaev absolutely wobbled him with a front kick to the jaw, followed by a vicious left hook and some ground and pound the end the fight in the third and final round.

Lungiambula would however live up to his “Champion” moniker and bounce back from the devastating loss when he defeated Markus Perez by unanimous decision in his next UFC fight.

Just like Soriano however, Lungiambula also finds himself on a two fight losing streak.

The first was a unanimous decision loss to Marc Andre Barriault, followed by a first round guillotine submission loss to Cody Brundage.

Lungiambula tends to strike wildly in the opening round and this could leave an opening for Soriano to land a clean shot on the chin to end the night early.

Ricky Simon put together an outstanding 9-1 record on the United States regional scene before being given his first shot at a UFC contract on the contender series.

Despite winning his contender series fight vs Donavon Frelow via split decision, he would not be offered a UFC contract straight away.

Instead Simon would take a couple more fights with LFA where he extended his winning streak once again by two fights, the latter of which was a first round knockout.

He was thrown right into the deep end in his UFC debut as he faced a formidable opponent in Merab Dvalishvili who he ended up choking out by the very last second of the final round.

He would follow up that debut victory with another two unanimous decision wins in a row over Montel Jackson and Rani Yahya, before suffering his first UFC loss to WEC and UFC veteran Uriah Faber, who finished him in the first round with an overhand right.

Rob Font would also hand Simon yet another loss in his next fight, this time by unanimous decision.

Ricky Simon has since put the losses behind him and is currently on a four fight winning streak in which he defeated Ray Borg by split decision, Gaetano Pirello by submission in round two, Brian Kelleher by unanimous decision, and finally Raphael Assuncao by knockout in the second round.

Jack Shore started his pro MMA career off the back of a twelve fight undefeated amatuer record. He competed on the regional scene in the UK and fought his way up to the Cage Warriors bantamweight championship.

He remains undefeated even at this point in his career and has so far put together a four fight winning streak in the UFC, with his most recent win over Timur Valiev coming by way of unanimous decision.

There is no doubt that this matchup will be Shore’s biggest step up in competition, and he will have to work very hard for this win compared to some of his previous fights.

Expect Ricky Simon to put the pressure on Shore early in the fight and probably win the opening round. Considering the fact that Jack Shore has shown strong third rounds in the past, the second round will be the deciding factor in the outcome of this fight.

Bill Algeo has faced more or less a decent level of competition throughout the earlier stages of his mixed martial arts career.

He was called up for a fight on the contender series vs Brendan Loughnane which he ended up losing by unanimous decision.

Following a unanimous decision win over Tim Dooling at CCFC 38, he would finally be granted a UFC debut.

He has so far won two and lost two fights in the UFC, all of which ended in unanimous decisions.

Herbert Burns made a name for himself in Singapore fighting at ONE FC and also had two fights under the Titan FC banner before getting his shot at a UFC contract on the contender series.

He absolutely dominated Darrick Minner in that fight and submitted him in the first round, a trend he would follow for the next two fights, both of which he also ended by first round submission.

His most recent fight vs Daniel Pineda resulted in Herbert’s first UFC loss, but it is noteworthy that he took the fight on very short notice and was not fully prepared when he accepted to fight Pineda, who submitted Burns in the second round.

It’s no secret that Bill Algeo is not much of a fight finisher and will be looking to score points as the rounds go by, however the big question is will he be able to get through the first round with Herbert Burns without getting submitted?

Dustin Jacoby has been competing in MMA and kickboxing for over ten years and has a considerable amount of knockout wins on his record.

His first UFC opportunity came in the form of a contender series fight back in 2020 vs Ty Flores, who he defeated by unanimous decision.

In his UFC debut, he would defeat Justin Ledet with a heavy barrage of leg kicks and punches, ending the fight in the first round.

He is yet to lose a fight in the UFC and even has a knockout win over Darren “The Dentist” Stewart.

Jacoby will have his hands full this time around however, as his opponent has an age, height and reach advantage over him.

Da Un Jung has been around the pro MMA scene since 2015 and has proven himself to be a real prospect in the UFC’s light heavyweight division.

Ever since his UFC debut in 2019, Jung has stacked up four wins and one draw in the promotion, with two of those fights resulting in first round finishes.

With both fighters bringing a striking heavy skillset to the table, expect the better grappler of the two to come out on top.

Dwight Grant put on an impressive performance at Bellator 185 where he defeated Don Mohammed by unanimous decision, before being called up the the contender series back in 2018.

He impressed Dana White by knocking out his opponent Tyler Hill, in the second round of the fight.

Since being signed with the UFC, Grant has won three of his fights and lost four of them but has faced high level competition throughout his run in the promotion.

Dustin Stoltzfus put together a record of 12-1 before getting his contender series opportunity, where he defeated Joseph Pyfer via slam in round one.

He would go on to lose his UFC debut to Kyle Daukaus who defeated him by unanimous decision.

Stoltzfus’ bad run wouldn’t end there as he also lost the next two UFC fights vs Rodlofo Vieira as well as Gerald Meerschaert both by third round rear naked choke submission.

Stoltzfus has shown flashes of brilliance in the earlier rounds of his fights but always seems to have an empty gas tank by the third.

Look for Grant to expose this weakness and go for a late finish.

Jessica Penne is a pioneer of women’s MMA and has been competing in the sport professionally since 2006.

She made a name for herself competing on season 20 of the ultimate fighter where she fought current women’s Strawweight champion Carla Esparza, who defeated Penne before going on to win the competition and become the inaugural strawweight queen.

Her UFC debut was her most brutal defeat to date where she was finished in the third round by a heavy barrage of strikes courtesy of Joanna Jedrzejczyk.

Penne would also lose her next two fights vs Jessica Andrade by seconds round Ko, followed by a unanimous decision loss to Danielle Taylor.

After a couple of years off, Jessica Penne has emerged once again as a contender in this division after defeating Lupita Godinez by unanimous decision, before more recently submitting Karolina Kowalkiewicz in the first round of her last fight.

Emily Ducote has so far put together a pro mixed martial arts record of 11-6, competing mostly in Bellator and Invicta FC where she has displayed good striking and considerable punching power for the division she’s currently fighting in.

This will be Ducote’s UFC debut and while she might feel the weight of the occasion, she definitely possesses the skills required to defeat Penne, and a massive age advantage of eleven years which will surely play a part.

Check out our UFC on ABC 3 Main Card Picks here!