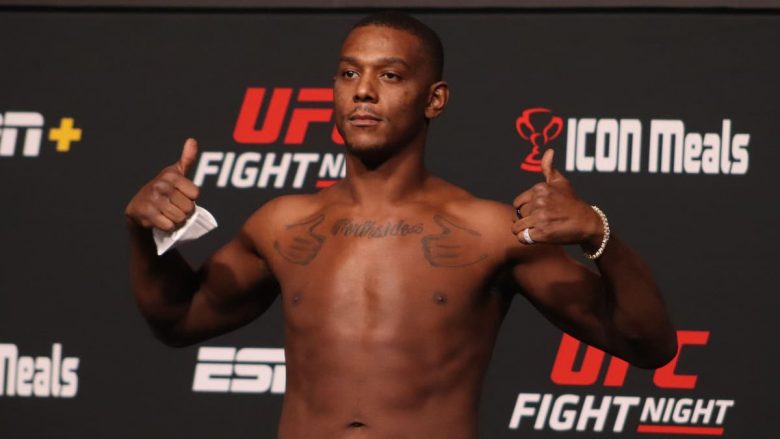 Just 1-4 over his last five fights, Thiago Santos hasn’t looked the same since injuring both of his knees in his UFC 239 title fight against Jon Jones in 2019.

His most recent fight was against rising star Magomed Ankalaev, who defeated Santos via unanimous decision this past March.

Jamahal Hill has won his last two fights, most recently knocking out Jimmy Walker in the first round this past February.

Hill will stand two-inches taller and have a three-inch reach advantage over Santos. At -260, Hill is the biggest betting favorite on the main card. To find out where to bet on this main card light heavyweight, see our Ultimate UFC Betting Guide.

Vicente Luque TALE OF THE TAPE Geoff Neal 30 Age 31 5 ft. 11 in. Height 5 ft. 11 in. 75.5 in. Reach 75 in. 21-8-1 Record 14-4 After winning four in a row, including a submission win over former welterweight champion Tyron Woodley, Vicente Luque had his winning streak snapped in his most recent bout this past April.

Luque, who had six post-fight bonuses in his last eight fights, lost his rematch against Belal Muhammad via unanimous decision.

Opposite of Luque, Geoff Neal recently snapped a two-fight losing streak with his split-decision win over Santiago Ponzinibbio at UFC 269 last December.

Both men stand at equal height, with Luque having the slightest half-inch reach advantage and boasting a black belt in Brazilian jiu-jitsu compared to Neal’s blue belt.

Zac Pauga TALE OF THE TAPE Mohammad Usman 34 Age 33 6 ft. Height 6 ft. 2 in. N/A Reach 79 in. 5-0 Record 7-2 The first of two TUF finale fights on the main card, Zac Pauga and Mohammad Usman will fight for a UFC heavyweight contract.

Usman is the brother of welterweight champion and pound-for-pound great Kamaru Usman.

Julian Miller has only three pro fights under her belt. Last May, Miller lost her last MMA bout. She was defeated unanimously by Invicta.

Miller will stand two inches taller but both women will share an equal reach of 67-inches.

Sergey Spivak is 1-1 over his last two fights. He most recently defeated Greg Hardy this past March at UFC 272 via first-round TKO.

Sakai will stand one inch taller but Spivak will have a one-inch reach advantage.

Cachoeira most recently fought Ji Yeon Kim this past February. Cachoeira won the fight of night by defeating Kim unanimously.

Lipski, listed as the -175 favorite, will have a two-inch reach advantage.

How to Watch UFC on ESPN: Santos vs Hill