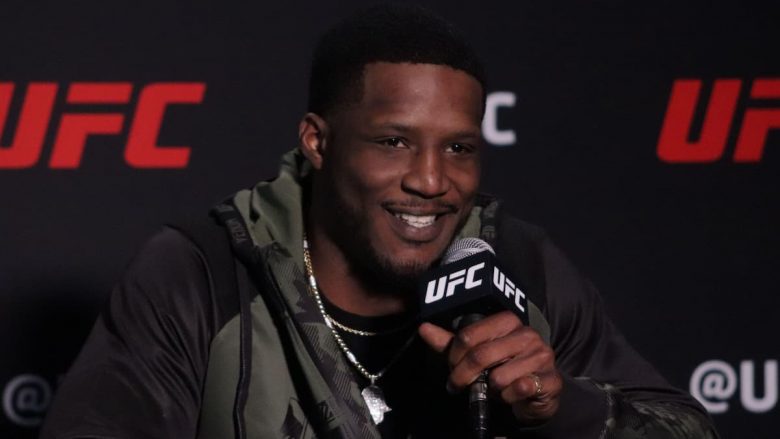 Fighting out of Tristar Gym in Quebec, Canada, Aiemann Zahabi has been training with the best fighters Canada has to offer including the likes of Georges “Rush” St Pierre and Rory “Red King” McDonald.

His head coach happens to be his brother, Firaz Zahabi, who founded Tristar gym.

Aiemann Zahabi made his UFC debut back in 2017 where he defeated Reginaldo Vieira by unanimous decision.

He would go on to lose his next fight with a flash spinning elbow knockout by Ricordo Ramos, in what was one of the most violent finishes of that year.

Zahabi would also lose his next fight, this time via unanimous decision to Vince Morales before taking a two year hiatus.

Upon his return and in his most recent fight, Aiemann Zahabi looked like a totally different fighter and pulled off a first round overhand knockout over Drako Rodriguez last February.

“Pretty” Ricky Turcios put together an eight fight winning streak on the regional scene including a win in Bellator, before being invited to compete on the contender series.

Turcios would lose his shot at a UFC contract after suffering a unanimous decision defeat to Boston Salmon on the show and would go on to have three more regional fights, one of which he lost to current ufc bantamweight fighter Mana Martinez.

He would really start gaining popularity after competing on “The Ultimate Fighter Season 29” where he would win both of his exhibition matches before winning a split decision in the finals to become the TUF 29 bantamweight champion.

Turcios possesses the skills to keep the pressure and pace on Zahabi over three rounds and should cruise to a decision win in this fight.

Antonina “La Pantera” Shevchenko started off her martial arts journey with a mixture of MMA, Muay Thai and Kickboxing fights before getting an opportunity on the contender series.

When it comes to training partners, Antonina has the best partner possible in her very own sister, women’s flyweight champion Valentina “Bullet” Shevchenko.

She won all her fights leading up to her contender series fight where she defeated Jamie Nievera with vicious clinch knees in the second round.

Antonina then went on to win her UFC debut vs Ji Yeon Kim via unanimous decision before suffering her first pro MMA loss via split decision vs Roxanne Modafferi.

Since the loss to Modafferi, Shevchenko has won three and lost four of her next fights in the promotion.

She is currently on a two fight losing streak and will be desperate to get a win, and seeing as she is the superior striker in this matchup which will mostly take place on the feet, it’s likely she will get that much needed win in this fight.

Cortney Casey is an OG of women’s UFC and has fought some of the biggest names in women’s MMA throughout her career, including Claudia Gadelha, Michelle Waterson, as well as Cynthia Calvillo who fights in the featured prelim.

She got off to a rough start in the promotion, suffering two losses in a row to Joanne Wood and Seo Hee Ham consecutively.

Her most recent fight did go her way however as she defeated Liliana Jojua by unanimous decision at UFC Vegas 42.

They say styles make fights and considering this is a fight between two strikers, Shevchenko is likely to come out on top due to her sharpness and Muay Thai background.

Cody Brundage made a name for himself on the regional scene, stacking up five wins in a row including three first round finishes.

Like many other fighters on this card, he got a shot at a UFC contract via a contender series fight. Brundage suffered his first pro MMA loss in this bout as his opponent William Knight knocked him out with ground and pound strikes to finish the fight in the opening round.

Following this loss he would make an appearance at “LFA 99: Dennis vs Cherant” where he defeated Joseph Kropschot via arm triangle choke in round three.

That win earned him a UFC debut and a shot at Nick Maximov at UFC 266, which unfortunately for him, he ended up losing by unanimous decision.

He did however win his next and most recent fight vs Dalcha Lungiambula via guillotine choke in round one.

Overall Cody Brundage is well rounded and has shown finishing ability throughout his career, which he will need if he wants to win this next fight.

Tresean Gore AKA “Mr. Vicious” started off his career with three regional wins in a row before competing on “The Ultimate fighter: Season 28”.

On the Ultimate fighter he won both of his exhibition matches, which earned him a shot at the finals.

Gore would take his first pro loss at the hands of Bryan Battle via unanimous decision at the ultimate fighter finale, which also happened to be his UFC debut.

No doubt “Mr. Vicious” will be hungry to get a win back and get a winning streak going again, and he possesses the skills to get it done.

Obama got back to his winning ways in his next and most recent fight vs Gabriel Benitez who he knocked out at the end of the first round with a heavy barrage of punches.

This young prospect is constantly looking for finishes in his fights and it will be no different this time around.

This fight will be Garrett Armfield’s UFC debut after putting together an 8-2 record so far in his pro mma career.

One of Armfields losses leading up to this fight was handed to him by current UFC fighter Ronnie Lawrence, who will face Saidyokub Kakhramonov in the opening fight of UFC Vegas 58.

If you look closely at Armfields fight history you will notice that he has had many tune up fights in which he faced opponents on losing records, so his current record does not really reflect his ability to compete with UFC caliber fighters.

While Armfield has proved himself to be a fun fighter to watch, with an ability to finish fights early, there is no doubt that this will be his toughest test to date.

Considering the fact that both fighters are coming off a first round knockout win, it is more than likely we will see an early finish in this contest.

Fight to go the distance: No (TBD)

Kennedy Nzechukwu had to earn his shot at a UFC contract the hard way. After winning his first two pro fights, he would be thrown right into a contender series fight vs Anton Berzin where he would win by a razor sharp split decision.

Despite the contender series win, the performance itself would not be enough to impress Dana White and earn himself a UFC contract.

Nzechukwu would then go on to extend his winning streak to five with another two knockout wins in a row, before being given another opportunity on the contender series.

This time around, Kennedy would not leave it in the judges hands, as he defeated Dennis Bryan with a vicious head kick followed by punches in round one. This win would finally earn him a UFC contract.

His debut did not go to plan however, as he was thrown right into the deep end again in a matchup with Paul “The Bear Jew” Craig, who would submit him with his signature triangle choke in round three, handing him his first ever pro defeat.

Nzechukwu was fired up by this loss and went on to win his next three UFC fights, with two of those coming by way of knockout.

Currently Nzechukwu is in the worst form of his career so far as he finds himself on a two fight losing streak.

The first loss was a KO via standing elbows to Da Un Jung in round one of their fight, followed by his most recent loss to Nick Negumereanu which ended in a split decision.

Karl “Baby K” Roberson also made his way to the UFC via the contender series route way back in 2017. He has faced top level opponents throughout his MMA career but has not had the best of luck in the UFC so far with four wins and five losses in the promotion.

After defeating Ryan Spann via elbow TKO in his contender series fight, Roberson would then win his UFC debut vs Darren ”The Dentist” Stewart by rear naked choke in round one.

It is noteworthy that so far, “Baby K” has been submitted in the first round four times in the UFC, the first two by Cezar Ferreira, followed by former UFC champion Glover Teixeira.

A couple of wins later he would lose to both Marvin Vettori and Brendan Allen, by first round submission.

His most recent fight ended in a second round TKO loss to Khalil Rountree in a fight where he was outmatched in the striking realm.

Overall Nzechukwu has a punching power advantage over Roberson and that could be the difference maker in the outcome of this bout.

This is a fantastic matchup between two bantamweights to get the night started, with both Lawrence and Kakhramonov currently on great winning streaks.

Ronnie Lawrence gained tons of experience on the regional scene in the United States before getting his shot on the contender series. He made his professional mixed martial arts debut at “Valor Fights 38” where he defeated a 4-2-0 Josh Carter by KO in the first round.

Lawrence would eventually suffer his first defeat to current UFC fighter Steve Garcia at Bellator 162 via unanimous decision, however this would be his only pro loss to date.

Two wins later and he found himself winning his contender series fight vs Jose Johnson via unanimous decision, which earned him a UFC contract.

Lawrence would then go on to win his UFC debut via TKO in the third round vs Vince Cachero before winning his most recent bout vs Mana Martinez via unanimous decision at UFC 271: Adesanya vs Whittaker 2.

Saidyokub Kakhramonov also has an abundance of experience on the regional scene, and he has always faced opponents with decent records, with no tune up fights.

With three knockouts and four submissions to his name, Kakhramonov is a notorious fight finisher, and will undoubtedly be looking for more of the same in this matchup.

He started off his pro MMA career with a five fight winning streak before suffering his first loss to Umar Nurmagomedov by unanimous decision during the PFL 2018 season.

Further down the line he would find himself on a two fight knockout streak which would eventually earn him a UFC contract.

He had a dream debut where he defeated Trevin Jones via guillotine choke in the third round, and will be hungry to get a winning streak going in the UFC.