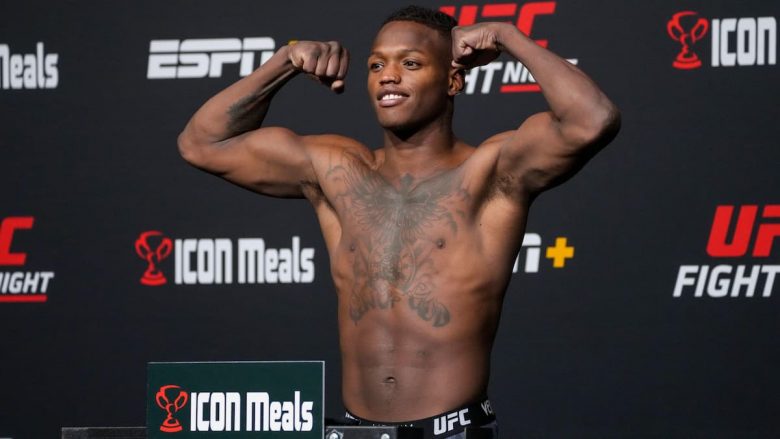 Sam Alvey comes out of retirement to make a surprise return at middleweight in the featured prelim of UFC Vegas 59 vs Michal Oleksiejczuk.

Alvey is currently on an astounding seven fight losing streak and has not won a fight since 2018 when he beat Gian Villante by split decision.

The long-time MMA veteran is well past his prime and it’s hard to envision a situation where he can defeat his younger Polish opponent.

Michal “Hussar” Oleksiejczuk made his UFC debut back in 2017 and faced Khalil Rountree in his first fight with the promotion, in a bout which ended in a no contest.

Oleksiejczuk has a solid first round finish and is an excellent knockout artist. He immediately applies striking pressure starting at the bell. Oleksiejczuk will make an impact in the fight by delivering five rounds of knockouts.

Terrence McKinney burst onto the scene in his UFC debut with his seven second knockout of Matt Frevola which went viral on social media. This young prospect was a fighter who always looks to win the first round.

He knocked down every opponent he faced during his time on the American regional circuit. After being signed to PFL, he achieved three rounds finishes and was then signed to UFC.

McKinney made a significant step in his UFC debut, where he was matched up against Drew Dober, a veteran fighter who won “T.Wrecks”.

Erick Gonzalez, aka “The Ghost Pepper”, has a lot experience on regional fighting circuits. He had many wins and losses prior to being signed by the UFC.

Gonzalez’s UFC debut was a disappointment. He was knocked out in round two by Jim Miller, a future UFC Hall of Famer. ” The Ghost Pepper is a tough opponent. McKinney was quick to knock him out with an overhand in round two.

The Ultimate Fighter season 29 welterweight champion Bryan Battle is cruising on an eight fight winning streak right now and faces his biggest step up in competition so far in Japanese knockout artist Takashi “Ten” Sato. Battle is a very odd fighter. He can use both his striking and grappling skills to make it interesting.

He defeated Gilbert Urbina by rear naked choke submission. Then, he beat Tresean Gorre in his latest fight.

Takashi Sato began his MMA journey fighting under Pancrase, mainly in Japan. He was able to finish the first round several times.

Sato is a strong wrestler with elite boxing and can end fights with one punch.

Bryan Battle will have a significant height advantage and reach over his opponent. He’ll be trying to show Sato’s weakness in submission.

Bryan Battle to win by Submission in round three (+1400)

Bryan Battle to win by Submission (+275)

Jason Witt AKA “The Vanilla Gorilla ” gained tons of experience on the region scene in the United States with appearances for Bellator and LFA in the past. Witt lost to Takashi Sato in round one of the UFC. He was then defeated by Cole Williams via a TKO.

Josh Quinlan has an unbeaten streak of eleven wins in his amateur and professional MMA career and is now making his UFC debut.

Quinlan has a history of winning fights quickly and efficiently, with many submissions and knockouts.

Quinlan has multiple advantages, including his height and reach as well as the six-year age difference between them. Expect Quinlan to try and score a knockout and get some ground and pound in order for this fight to end quickly.

Cory McKenna is yet another fighter signed by the UFC via the contender series and is one of the youngest fighters on the roster. She won her UFC debut with an impressive win over Kay Hansen, before falling to Elise Reed in a split decision.

Miranda Granger brought an undefeated record into her 2019 UFC debut where she defeated Hannah Goldy by unanimous decision before going on a two fight losing streak.

Granger was defeated by Amanda Lemos in round one by a rear naked choke. This was her first loss.

Mayra Bueno Silva went into her contender series bout with an undefeated four fight winning streak which she extended to five when she defeated 7-0-0 Mayana Souza by first round ninja choke. With three victories, two losses, and one draw, Mayra Bueno Silva entered her contender series bout with an undefeated four-fight winning streak. She hopes to continue that streak with her next fight against a top-ranked opponent.

Stephanie Egger fought in many countries, including Japan and Italy.

She faced Manon Fiorot at her UFC debut, but she was defeated unanimously. Yanan Wu won her next fight by unanimous decision. Mayra Bueno will try to win by submission, showing her opponent’s weaknesses.

Mayra Bueno Silva to win by Submission in round one (+900)