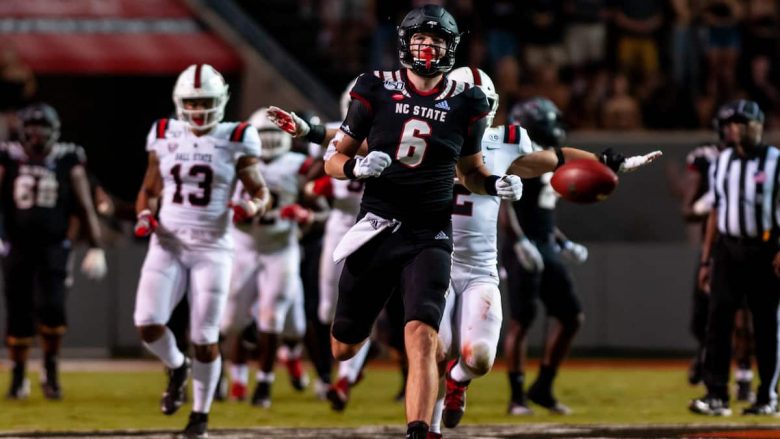 The second game of the USFL’s Week 2 Saturday double-header features a South Division battle between two 1-0 franchises – the hometown Birmingham Stallions and the Houston Gamblers – with the Stallions high-scoring offense facing the Gamblers tough defensive front.

In Week 1, the Stallions played the New Jersey Generals in a game that was thrilling to the end as Birmingham scored three touchdowns on their last three possessions led by their backup QB J’Mar Davis-Smith who took over once starter Alex McGough left the game with a bad ankle.

The Gamblers are led by QB Clayton Thorson whose Week 1 production (9-17, 73 yds, TD, INT) helped earn Houston their first win, their 17-12 victory over the Michigan Panthers having been delayed by an hour due to weather which also pushed back the final game to Monday.

Can Stallions QB J’Mar Davis-Smith Step into the Starting Role?

In USFL Week 1, Birmingham Stallions head coach Skip Holtz started Alex McGough under center, and he completed half his passes (5-10) for 55 yards and a touchdown but with an interception, a decent start to the game but an ankle injury in the second quarter ended his day.

That is when backup J’Mar Davis-Smith took over and helped win the game by completing 11-21 for 156 yards and a touchdown while also carrying the ball three times for 13 yards including the all-important game winning touchdown on a miraculous scramble between diving defenders.

The Stallions come from behind Week 1 win to open the USFL’s season was an exciting debut to say the least, and now QB Davis-Smith will most likely get the starting nod in Week 2 and the QB job should be his to lose, though once McGough’s ankle heals up, what a tandem they’ll be.

Can the Gamblers Dominate the Defensive Front Last Four Quarters?

The Houston Gamblers’ defensive line looked in mid-season form in Week 1 after sacking Michigan quarterback Shea Patterson three times in that win, and with the team’s secondary also effective – they picked off Panthers QB Paxton Lynch – this side of the ball looks scary.

The only downside to playing that hard in the first half is that even the most well-conditioned players eventually get tired, and after just three weeks of initial training together, this defensive front line looked winded towards the end of the game and Michigan seemed to take advantage.

No doubt Houston head coach Kevin Sumlin and defensive line coach Ty Warren also noticed and will clean up that part of the team’s basic training and once that happens this Gamblers D-line should be terrifying, with standout DE Ahmad Gooden (see below) a team leader for sure.

Having a pass-catching tight end is a bonus to any football offense, especially if he is also a competent blocker, and it looks like the Birmingham Stallions have that in Cary Angeline, the 6’ 7” 250 pound tight end who looks capable of both and more with a Gronk-like debut in Week 1.

Angeline caught two of the six passes he was targeted with for 35 yards and a touchdown, that score an incredible catch followed by a bull-rush dive into the endzone to tie the game and help the Stallions complete their exciting Week 1 comeback win, a sign of good things to come.

This was not Angeline’s first taste of pro football, having been signed (and subsequently waived) by both the Arizona Cardinals and Philadelphia Eagles last season, a 24-year old USC and NC State alum who could give the Stallions QB J’Mar Davis-Smith another worthy target.

What a Week 1 debut Houston Gamblers Ahmad Gooden had, the 26-year-old defensive end causing 2 fumbles in the first half and one in the second of the team’s win over the Panthers, no doubt his NFL experience (Broncos, Jets, Bills) playing a part of his quick and early production.

Gooden seemed to be everywhere on the field including early on when he knocked the football out of Panthers QB Shea Patterson’s hand, and it led to an exciting scoop and score by Gambler teammate Reggie Northrup who ran 87 yards for their first touchdown of the season.

In just one game, the 6’ 2” 245 pound Gooden already leads his Gamblers with two sacks, plus he has 8 tackles and 3 forced fumbles, production that should continue for this former SoCon Defensive Player of the Year (2017) who is now proving his defensive worth in the USFL.

How to Watch Stallions vs Gamblers

Stallions vs Gamblers Information What Birmingham Stallions vs Houston Gamblers Where Protective Stadium in Birmingham, Alabama When Saturday, April 23, 2022; 7: 00 PM ET How to watch FS1