Week 2 Titans Vs Bills: The Bills Are Lucky Enough To Have A Big-Armed Quarterback Like Josh Allen 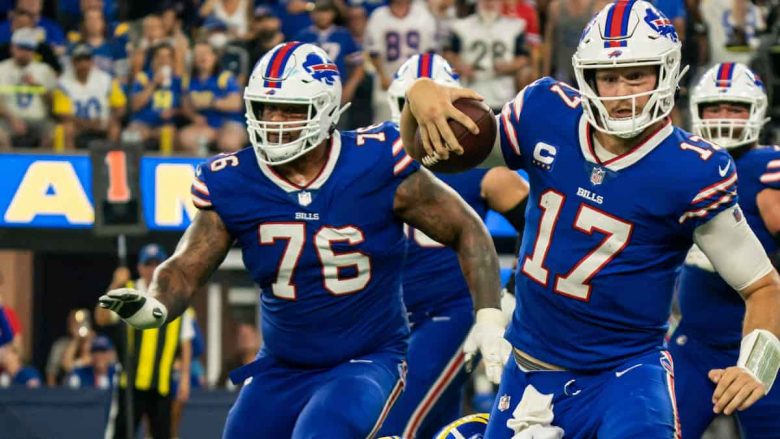 *) , , , , . This second match in the NFL Week 2 Monday Night Football doubleheader pits the 1-0 Buffalo Bills against the 0-1 Tennessee Titans. It is a chance for both the Titans and Bills to win their first victory of the season.

HC Mike Vrabel’s Titans were defeated by the NY Giants in Week 1. Their defense collapsed in the second quarter and New York scored a touchdown with a 2-point conversion. This left Vrabel furious and now Derrick Henry, the Bills’ rushing attack is facing the defense.

The first game of the NFL’s 2022 season was a TNF road blowout sponsored by the Buffalo Bills who trounced all over the reigning champion LA Rams, 31-10, the Bills defense with 7 sacks on the season already as QB Josh Allen continues to develop into a master craftsman.

Can the Titans defense finish the game in week 2?

In Week 1 of the 2022 season, the Tennessee Titans defense looked dominant in the first half keeping the opposing New York Giants out of the end zone and off the scoreboard allowing the team to go into the locker room with a confident 13-0 lead that seemed well earned.

Then in the second half, the Giants made an adjustment, and the Titans defense paid the price allowing 21 points including a last minute touchdown and 2-point conversion that lost them the game, a failure by DC Shane Bowen’s crew that they have no doubt been attempting to fix.

The Buffalo Bills offense currently ranks in the top-7. Stefon Diggs and Josh Allen are just warming up. So Tennessee’s defensive players – DT Jeffrey Simmons and LB Bud Dupree and CB Caleb Farley – should bring their best to Orchard Park.

One of the factors that led to the Bills controlling the LA Rams in Week 1 was their ability to stop LA’s efficient run game as Buffalo’s defense kept the Rams RB crew to just 52 total yards on the ground, their longest run an 18-yarder with zero LA backs making it into the end zone all game.

The Bills’ strong rush defense will no doubt come in handy in Week 2 when Buffalo hosts the Tennessee Titans and their star RB Derrick Henry, a 6′ 3″ 247 pound 2x NFL rushing yards leader who was out for much of last season due to a broken foot, though he is healthy now.

Henry averages 4.8 yard per carry. His speed, size, and power make Henry difficult to tackle. Watch for Bills LBs Matt Milano and Tremaine Edmunds to face Henry to try to counter his efforts.

The Tennessee Titans front office decided this offseason to add a sizable receiver to the roster who will give QB Ryan Tannehill another dependable target, so they used their first-round draft pick (18th selection overall) to snag Arkansas star Treylon Burks who fits the desired mold.

That move is already paying off with Burks on the field in Week 1 catching 3 of the 5 passes he was targeted with for 55 total yards, his longest a 27-yarder, a solid opening performance for a player brand new to the league now facing professional cornerbacks and safeties on the field.

A former First-team All-SEC player who caught 146 passes for 2,399 yards and 18 TDs when he was a Razorback, Burks can also run with the ball having posted 38 carries for 222 yards and a touchdown while playing at Arkansas, a Deebo Samuel type range that could be useful.

Bills Key Player: Stefon Diggers and Gabe Davis The Bills have an extremely strong WR group, including Stefon diggs, who is a deep threat player, and Gabe Davis . This duo loves to exploit opposing defenses.

Last week those three offensive players were crucial to the Bills’ first win, with QB Allen (26/31, 297 yds, 3TD, 2 INT) struggling to take good care of the ball while counting on veteran receiver Stefon Diggs (8 rec, 122 yds, TD) to bail him out, a partnership that will continue to develop.

How to Watch Titans vs Bills

What Tennessee Titans vs Buffalo Bills Where Highmark Stadium in Orchard Park, New York When Monday, September 19, 2022; 7: 15 PM ET How to watch ESPN